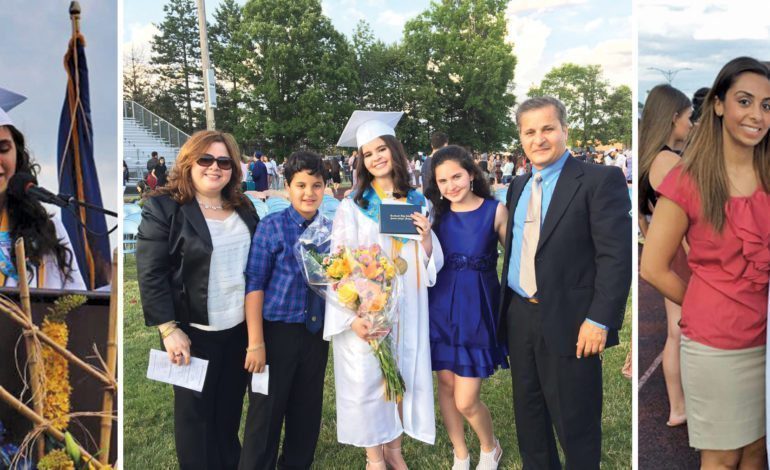 DEARBORN HEIGHTS — In mid June, Crestwood High School sent 312 graduates on a life-altering path that will ultimately result in an even more prosperous new chapter as 178 of them have been offered a combined $13.6 million in scholarships and awards.

All the graduates applied to college.

Principal John Tafelski expressed his pride and excitement to The AANews.

“I am so impressed with the class of 2017,” he said. “They have excelled academically, athletically and from a philanthropic standpoint. I am proud that they are carrying on the Crestwood traditions of attending prestigious universities and succeeding on the SAT and AP exams…. I look forward to seeing the great things they accomplish in the years to come.”

Counselor Yusra Hamadeh said she was lucky to work with such a group of high-powered students and wishes them an even more successful future. Stanford had been Valedictorian Yara Komaiha’s dream school, but instead she’ll be attending MIT this fall.

The 17-year-old student applied to both— as well as the University of Michigan and other local universities— and received acceptance letters from all of them.

Stanford and MIT awarded her full-ride scholarships, but Komaiha, who graduated with a 4.65 cumulative GPA, 1540 SAT score and 15 AP classes, chose the latter after touring and learning more about the university.

“I was pretty much committed to Stanford before I visited even their campus,” she said, adding that she received an acceptance letter early, on December 9. “I was really happy. I really wanted to go there.”

Her mother advised her to keep her options open after she got accepted to MIT in March, so she checked out both campuses and found herself surprisingly choosing MIT instead.

Komaiha said Crestwood High School students realize when they graduate the opportunities they’d been given— from the AP classes being offered to research that prepared them for higher education.

“Everyone is just so supportive,” she said. “It’s also really nice [that] I grew up with the same kids… I’ve known the graduates since second grade. So there’s a family atmosphere at Crestwood for sure.”

Komaiha credits her parents for all her success because they have been her number one supporters “from day one.”

“People would tell them, ‘Why would you send her off? We have great universities here,'” she said, adding that they never limited her options and that only made her thrive more.

Komaiha hopes to inspire Arab American students to not shy away from applying to these prestigious schools. She advised new high school students to start off with self-motivation.

“It’s great having people around you all the time telling you, you can do it,” she said. “But, at the same time, you really need to tell yourself I can and I want to do something by the end of my four years.” Salutatorian Sandra Dubaisi with her family

Inspired by her father, Hassan, an engineer, and mother, Yumana, a lawyer, Dubaisi hopes to pursue both careers. She will be deciding between majors in environmental or biomedical engineering, with a pre-law track and then may be heading to law school after that.

Dubaisi has also grown up with her fellow graduates and at first was scared of change.

However, she believes Crestwood truly prepared her and her classmates “to start a new chapter in life.”

Dubaisi also acknowledged her parents as the definite source of her success as their encouragement made her aim higher and henceforth, become salutatorian. She thanked them and her siblings, Sammy and Hannah, for all their support.

“I also had really good teachers,” she said, adding that she has been blessed throughout the years. “I wish I can thank all the teachers and administrators at Crestwood all by name… They were always there for us and helped us through everything.” She applied to most of the state universities and was accepted to all of them, including the University of Michigan and U of M-Dearborn.

Abdelhak agreed with Komaiha and Dubaisi that attending Crestwood High School for four years had truly prepared them for what’s to come.

“I’m so happy that I was able to be there at this time [when the school] really started focusing on the academics and the advanced placement classes and prioritizing those things,” she said. “Also, Crestwood was like a family… you know everyone.”

Abdelhak also said her parents inspired her and credits all her success to them because they taught her the importance of education. She also thanks her siblings Abe and Shereen for their continued support as well as her AP research and AP Capstone teachers— Christopher Hren and Nour Shahrouri, respectively— who positively impacted her high school years.