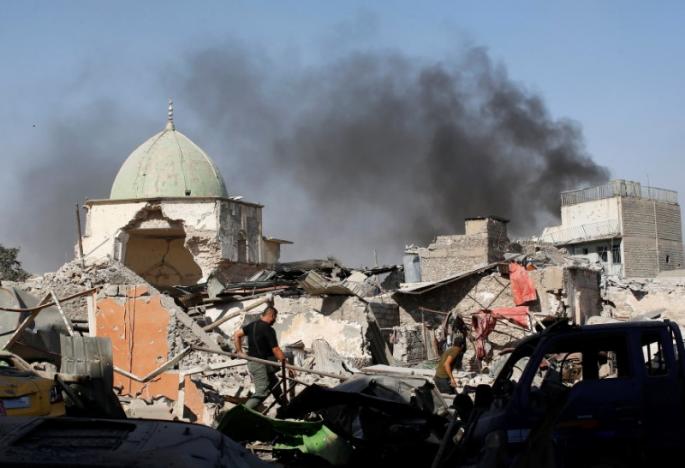 MOSUL — After eight months of grinding urban warfare, Iraqi government troops captured the ruined mosque at the heart of ISIS’ de facto capital in Mosul, on Thursday and the prime minister declared the group’s self styled caliphate at an end.

Iraqi authorities expect the long battle for Mosul to end in coming days as remaining ISIS fighters are bottled up in just a handful of neighborhoods of the Old City.

The seizure of the nearly 850-year-old Grand al-Nuri Mosque — from where ISIS proclaimed the caliphate nearly three years ago to the day — is a huge symbolic victory.

“The return of al-Nuri Mosque and al-Hadba minaret to the fold of the nation marks the end of the Daesh state of falsehood,” Prime Minister Haider al-Abadi said in a statement, referring to the hardline Sunni Muslim group by an Arabic acronym.

The fall of Mosul would in effect mark the end of the Iraqi half of the IS caliphate, although the group still controls territory west and south of the city, ruling over hundreds of thousands of people. Its stronghold in Syria, Raqqa, is also close to falling.

A U.S.-backed Kurdish-led coalition besieging Raqqa on Thursday, fully encircled it after closing the militants’ last way out from the south, the Syrian Observatory for Human Rights monitoring group said.

“Their fictitious state has fallen,” an Iraqi military spokesman, Brigadier General Yahya Rasool, told state TV. However, it still occupies an area as big as Belgium, across Iraq and Syria, according to IHS Markit, an analytics firm.

ISIS fighters blew up the medieval mosque and its famed leaning minaret a week ago as U.S.-backed Iraqi forces started a push in its direction. Their black flag had been flying from al-Hadba (The Hunchback) minaret since June 2014.