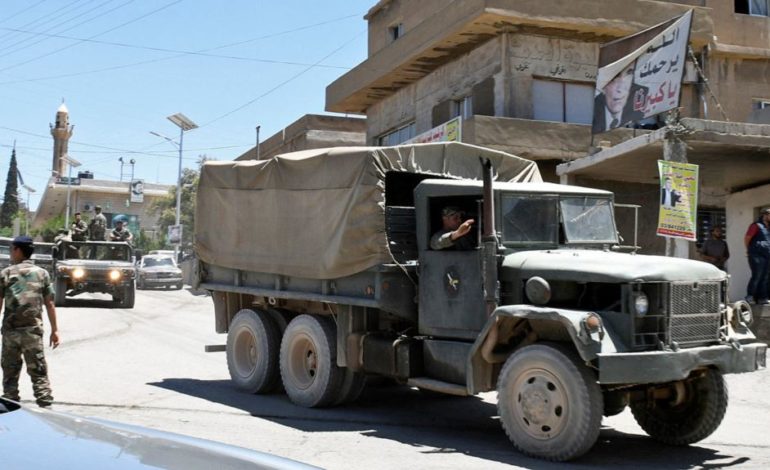 A convoy of Lebanese army soldiers drives at the entrance of the border town of Arsal, in eastern Bekaa Valley, Lebanon, June 30 - Reuters

BEIRUT ― Human Rights Watch on Wednesday demanded an independent inquiry into the deaths of four Syrians who died while in Lebanese army custody and said anyone responsible for wrongdoing should be held to account.

The Lebanese army said on Tuesday that the four Syrian men arrested during a raid on a refugee camp on Friday had died while in detention from chronic illnesses that had been aggravated by the weather conditions.

In separate statements on the deaths, a Lebanese human rights group and a Syrian opposition alliance accused the Lebanese army of torture that led to the deaths.

A military source denied allegations of torture, saying they were baseless.

“In light of the army’s own admission that the health conditions of the detainees deteriorated while in custody, a formal, transparent and independent investigation must be launched and in case of wrongdoing those responsible for the deaths should be held accountable,” Lama Fakih, deputy Middle East director at Human Rights Watch, said in a statement.

The army detained several hundred people during its raid in the Arsal area on Friday in what it called a preemptive security operation against militants planning attacks in Lebanon. The army said five suicide attackers had blown themselves up while attacking soldiers during the raid, and one civilian was killed.

The Lebanese Center for Human Rights (CLDH) said torture had led to the deaths of at least four detainees at refugee camps in the Arsal area and demanded a judicial inquiry.

The Turkey-based Syrian National Coalition (SNC) said 10 people had died in custody, some of them by torture, while it said 19 others had died in the raid itself. It also demanded an investigation.

“We reject any attempt to justify these violations and crimes against Syrian refugees on the pretext of preserving security or allegations of confronting terror in Lebanon,” the SNC said in its statement.

The U.N. refugee agency says Lebanon hosts more than 1 million registered Syrian refugees, equivalent to a quarter of its population, though the number is widely put at closer to 1.5 million.

They are scattered across Lebanon in informal tented settlements where many face the risk of arrest due to a lack of legal residency that they struggle to obtain.

The camps around Arsal town have long been a haven for militants coming from Syria who have clashed with Lebanese forces conducting security raids searching for suspects hiding among the refugees.