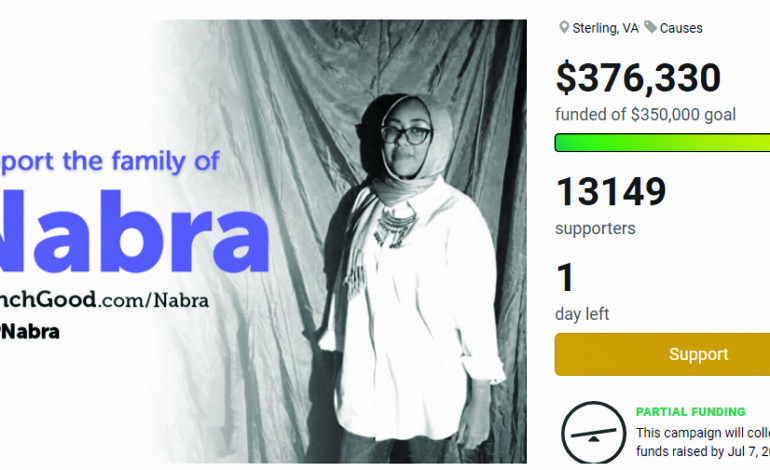 Screenshot of LaunchGood flash campaign for the family of Nabra Hassanen, a young teen murdered during Ramadan in Sterling, Virginia

DETROIT — Since 2013, the Detroit-based company LaunchGood has been providing the international Muslim community with a unique way to reclaim its narrative through charitable online giving.

“There is so much misinformation about Muslims and Arabs out there that it’s a way for us to take things into our own hands,” said Omar Hamid, LaunchGood’s co-founder.

Hamid, 26, is an Arab American who co-founded LaunchGood with Chris Blauvelt and Amany Killawi; he was recently featured on the cover of Inc. Magazine Qatar for his entrepreneurial success with LaunchGood and for being a finalist on the Middle East Broadcasting Center’s  (MBC) show Stars of Science for a chair he designed to help people who need physical supports.

“If LaunchGood is from Muslims, it’s for everyone,” Hamid said. “We are trying not to exist within a bubble. It’s [LG] mostly campaigns that are serving everyone [not just Muslims].”

Initially, LaunchGood began as a company marketed for Muslims to crowdfund creative and entrepreneurial projects and has since evolved into a way for Muslims to connect instantly with different communities worldwide by the push of a button on one’s device. LaunchGood has become an accessible way for Muslims to mobilize support for a multitude of projects in what Hamid calls “flash campaigns”—campaigns where the urgency and speed through which people give is apparent.

“The support for the Grenfell Tower victims and for the family of Nabra [Hassanen],” Hamid said. “The Portland heroes… They [contributors] might be able to feel like they are a part of making things better.”

The aforementioned were flash campaigns. 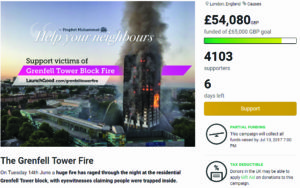 Screenshot of campaign which received international support for the Grenfell Tower victims and families through a LaunchGood campaign.

The design infrastructure of LaunchGood’s site is Hamid’s forte. He has continuously pushed LaunchGood’s branding to ensure the online platform is always a step ahead in the market. When someone navigates the website with ease it’s because of Hamid and his design team.

“It’s under my responsibility to make sure our platform is continuously advancing,” Hamid said.

He also said LaunchGood’s metrics are beating the competition from every angle, which means that the success rate for a project run on LaunchGood is higher compared to if it were to run on any other crowdfunding site.

During the Muslim holy month of Ramadan, LaunchGood had a 30-day challenge for users to give to a different cause each day. This challenge raised more than $1.5 million toward 170 campaigns worldwide. The annual challenge had 2,500 users in 2016, but exceeded 15,000 this year.

“The Ramadan Challenge is a great way to tap into providing a Muslim product,” Hamid said. “Unlike any other product, the Muslim market is vastly underserved.”

He also said other platforms like Kickstarter and GoFundMe are not operating within a niche market and must be more generic, whereas LaunchGood is able to provide custom products to the Muslim community. 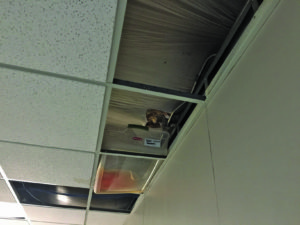 The leaky roof at Zaman International that is getting replaced because of support from crowdfunding through LaunchGood.

One heartfelt campaign during Ramadan was for Zaman International, a local and international secular nonprofit that seeks to empower and provide basic needs to women and children. Unfortunately, Zaman had been victim of hate mail/speech during Ramadan; one of Zaman’s donors initiated a LaunchGood campaign shortly after titled “Protect Zaman from Hate and Rain”, which was fully funded in order for the Inkster-based location to get a new roof.

“It really introduced Zaman around the world,” said Monica Boomer, director of community engagement at Zaman. “People heard about Zaman and our mission. This campaign reached so many people.”

After the 2016 elections, many Jewish cemeteries across the nation were vandalized.
Activist Linda Sarsour coordinated with LaunchGood to set up a campaign to repair the affected cemeteries. In less than 24 hours, the campaign reached its initial goal of $20,000, and by the close of the campaign more than $160,000 had been donated.

We saw a lot of $18 and multiples of 18,” Hamid said about the cemetery repair campaign.

He added that LaunchGood campaigns, like that one, can be learning opportunities. He learned that 18 is a significant number for the Jewish community and was touched to see so many donations for the Jewish cemeteries with that number.

Whether the donations were by non-Jews showing solidarity by using multiples of 18 or by members of the Jewish community, it was a touching campaign that Hamid got to witness from behind the scenes.

“We see crowdfunding as a means of storytelling,” he said. “If you have an idea, we can show values and action. This is a way for us to put our ideas online and get them funded.”

LaunchGood has held campaigns for projects in 87 countries and has collectively funded more than $27.6 million in crowdfunding campaigns since its inception. There are team members in multiple locations around the world; LaunchGood gives access to a remote three-month training through fellowships where interested individuals can learn about entrepreneurship from anywhere around the world.

“LaunchGood alone has no value,” Hamid said. “All the value and energy comes from what the community is doing.”