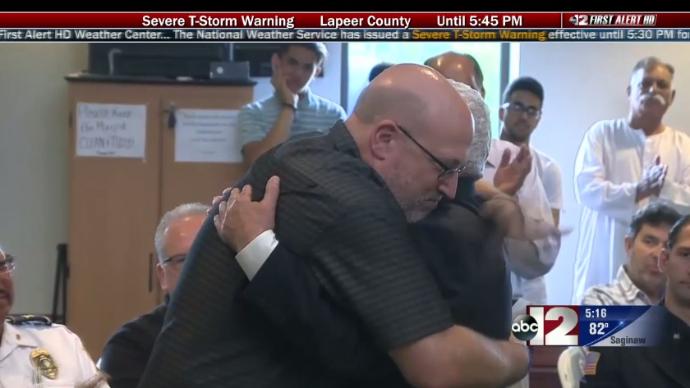 FLINT- The Flint Islamic Center raised $10,000 for  Lt. Jeff Neville, the victim of the Bishop International Airport stabbing, as he continues to recover from his injury.

The Flint Muslim community launched the fundraising campaign right after the attack.

Amor Ftouhi, 49, of Montreal, was charged with stabbing officer Neville at the airport in Flint on June 21.

He was indicted on charges of committing an act of violence at an international airport and interference with airport security, acting U.S. Attorney Daniel Lemisch said in a statement. The charges carry a maximum penalty of up to life in prison.

Dr. Abdul Majeed Jondy, the President of the center and a trauma surgeon at Hurley Medical Center, had visited Neville in the hospital the day after the attack. However, in an emotional reunion on Friday, Jondy presented Neville with the check.

Jondy thanked “God for his safety” at the ceremony and said “[Neville] is coming back to serve this country again.”

“I will be back at work at the airport,” Neville stated proudly as the crowd applauded.