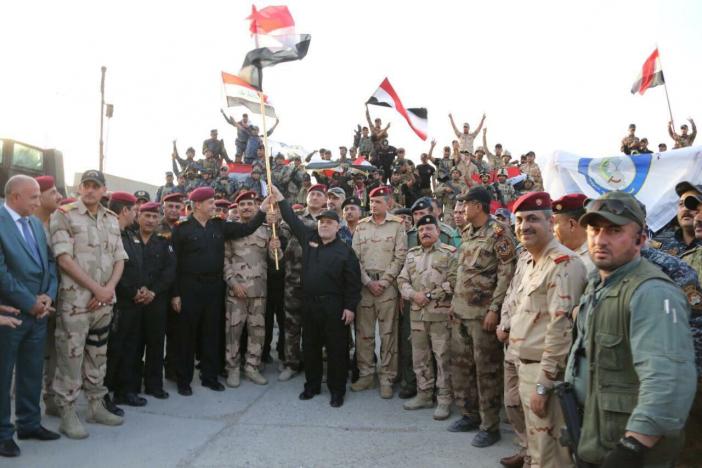 MOSUL/ERBIL, IRAQ – Iraq’s prime minister declared victory over Islamic State in Mosul on Monday, three years after the militants seized the city and made it the stronghold of a “caliphate” they said would take over the world.

“I announce from here the end and the failure and the collapse of the terrorist state of falsehood and terrorism which the terrorist Daesh announced from Mosul,” Haider al-Abadi said in a speech shown on state television, using an Arabic acronym for Islamic State.

A 100,000-strong alliance of Iraqi government units, Kurdish Peshmerga fighters and Shia  militias launched the offensive to recapture the northern city from the militants in October, with key air and ground support from a U.S.-led coalition.

Abadi, wearing a black military uniform and flanked by commanders from the security forces, thanked troops and the coalition. But he warned that more challenges lay ahead. “We have another mission ahead of us, to create stability, to build and clear Daesh cells, and that requires an intelligence and security effort, and the unity which enabled us to fight Daesh,” he said before raising an Iraqi flag.

Iraq declared a week-long holiday to mark the victory. People celebrated in the streets of the capital Baghdad and southern cities.

Abadi arrived in Mosul on Sunday to congratulate military commanders who have waged a nearly nine-month battle to recapture the city, many parts of which were reduced to rubble.

Gunfire and explosions could be heard earlier in the day as the last few Islamic State positions were pounded.

The coalition said in a statement Iraqi forces were in “firm control” of Mosul, but some areas still needed to be cleared of explosive devices and possible Islamic State fighters in hiding.

Around the time of Abadi’s announcement, Islamic State released a statement claiming to have mounted an attack on Iraqi forces in Mosul. Reuters could not immediately verify the report.

Abadi had been meeting military and political officials in Mosul in an atmosphere of celebration that contrasts with the fear that spread after a few hundred Islamic State militants seized the city and the Iraqi army crumbled in July 2014.

Islamic State leader Abu Bakr al-Baghdadi shocked the Middle East and Western powers three years ago by appearing at the pulpit of Mosul’s Grand al-Nuri Mosque to declare the caliphate and himself the leader of the world’s Muslims.

A reign of terror followed which eventually alienated even many of those Sunni Muslims who had supported the group as allies against Iraq’s Shia majority. Opponents of Islamic State were executed and such crimes as smoking a cigarette were punishable by public whipping.