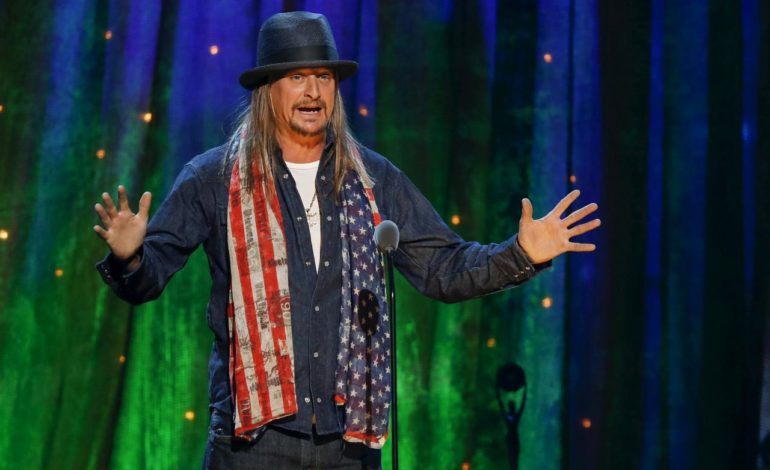 DETROIT- Recording star Kid Rock, an outspoken supporter of Republican President Donald Trump, hinted in website and social media messages on Wednesday that he intends to run for the U.S. Senate in 2018, promising a “major announcement” to come soon.

The 46-year-old Michigan native drew attention on Twitter and his Facebook page to a “Kid Rock ’18 for U.S. Senate” website. It featured a photo of the goateed singer-songwriter wearing a leather jacket, dark glasses and white fedora, seated in a plush, star-spangled chair beside a stuffed deer above the tagline: “Are you scared?”

The site also displays images of a T-shirt, baseball cap and bumper sticker emblazoned with the campaign logo, “Kid Rock for US Senate” and a box of alternating slogans, including, “In Rock We Trust,” “Party to the People” and “You Never Met a Politician Quite Like Me.”

“I have a ton of emails and texts asking me if this website is real … The answer is an absolute YES,” he said on his verified Twitter account. “Stay tuned, I will have a major announcement in the near future.”

While no mention was made in Wednesday’s online postings about Rock’s political affiliation or in which state he would run, he presumably would seek to challenge Michigan’s Democratic incumbent senator, Debbie Stabenow, who is up for re-election in 2018.

The Capitol Hill-based newspaper Roll Call reported that Rock’s name surfaced as a possible candidate earlier this month during a state Republican Party convention in Michigan, which Trump carried in the 2016 presidential race, though no official decisions were announced.

Stabenow seemed to shrug off the prospect of a political challenge from Rock, saying in a Twitter post: “I know we both share a love of music. I concede he’s better at playing guitar and I’ll keep doing what I do best: fighting for Michigan.”