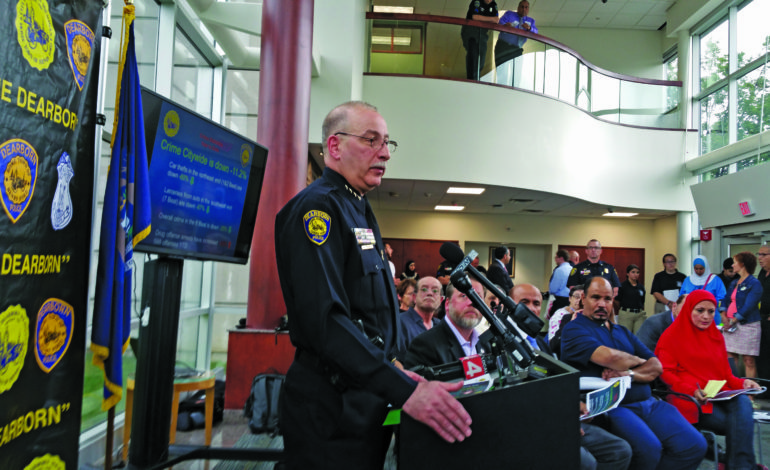 DEARBORN — According to Police Chief Ron Haddad, Dearborn’s crime rate saw an 11.20 percent reduction from 3,246 in 2016 to 2,881 so far this year, with some “alarming trends”, like a 26 percent increase in drug offense arrests. The reckless driving rate also sees little improvement.

At a July 10 press conference, held at the Dearborn Administrative Center, Haddad shared updates about the major crimes that have taken place since the end of last year, as well as the driving issues dominating the city.

Haddad asked for the public’s vigilance and assistance in two recent crimes— one of which involves the theft of credit card and debit card information. He said the ATM skimmer takes the information by attaching the device to the slot of the automated teller machines or gas pumps. The device scans the numbers on the card, which then allows the person to use or withdraw money whenever they wish.

Police said the footage showed one person who’s involved in two new skimming cases in the city is also believed to be connected to similar crimes in Garden City and Canton Twp., but that two men are actually working together. The second suspect is in a car and cannot be seen clearly.

The skimmers are driving a first generation silver Nissan Murano and another unknown dark colored vehicle.

The chief also requested help identifying the suspect responsible for a vehicle larceny around Michigan Avenue and Gulley. He said the older White man with glasses, who has short, white hair and tattoos on both arms, seemed to be targeting contractors as he strolled around stealing tools from commercial vans parked in the area.

Haddad said the three men who robbed a jewelry store on Warren Avenue near Schaefer Road on December 21 by disguising themselves as customers—one even posing as a Muslim woman in a full robe and a hijab— were sentenced last week after accepting plea deals.

Haddad then addressed the pharmacy break-ins that occurred in January in Dearborn, Detroit and several other cities. He said that the Dearborn Police, Detroit Police and the FBI discovered that the 11 incidents were linked to multiple suspects, vehicles and residencies throughout Metro Detroit.

“We have three people in custody,” he said. But police are looking for the rest connected to the crime. “I’m not going to give you a lot of details as this is an ongoing investigation.”

As for vehicle larcenies, Haddad said the community has been active through the “Lock it or Lose it” campaign, which aims to reduce thefts by reminding people to lock their vehicles.

On June 9, one community member followed 20-year-old Marcus Timmons of Detroit and 21-year-old Desmond Barnes of Redford after noticing their unsuccessful attempt to steal tires off a car.

But, the resident didn’t lose sight of the two and helped police catch them. The investigation revealed that they were in a stolen vehicle and responsible for other crimes in the city.

Both men were arraigned in the 19th District Court on numerous felonies and will be required to wear GPS tethers if bond is posted. Timmons’ bond is set at $10,000 cash, while Barnes’s is set at $7,500 cash.

Haddad also said another anonymous resident led to the arrest of the man who stole a cell phone from a 13-year-old girl on Middlesex St. Florin Bobic was charged with unarmed robbery and habitual offender third offense.

Judge Gene Hunt of the 19th District Court arraigned him and set bond at $15,000/10 percent. Bobic will have to wear a GPS tether if he posts bond.

He has been charged on federal counts of distribution of a controlled substance and is awaiting trial. The investigation, conducted by the Dearborn Police Narcotics Unit, the FBI, the Department of Health and Human Services’ office of the inspector general and the Detroit Police Department, revealed that Oniango was the organizer of a large prescription narcotics operation in Metro Detroit and was the main source for prescription narcotics to local drug dealers.

“When you look at the crisis that America is facing now, one guy like this in our mix just really makes a bad situation worse,” Haddad said. “We are going to continue to seek out doctors that do this kind of thing in our community and charge them with the highest types of crimes that we can.” Haddad also said he was glad to share that on July 7 a Wayne County Circuit Court jury convicted the two armed men, one of whom was masked, who walked into the police station on February 5.

Both men will be sentenced on August 18.

“We got support from all over the world,” Haddad said. “Most people said that if somebody would’ve tried this at their location, it wouldn’t have ended up the way it did in Dearborn. It just shows the poise and deliberation of our officers… I couldn’t be prouder.”

The overall crime rate in Dearborn deescalated, but the chief acknowledged the 26 percent increase in drug offense arrests as startling.

“We’ve arrested 588 people,” he said. “….I think we’ve launched a holistic approach to trying to educate our community, but when we find people in violation that further endanger our community by selling pills… we’re going to take action against them.”

When comparing the overall crime rate to the reckless driving rate, the crime rate is by far better as it’s decreasing.

Haddad said that around six weeks ago, police started “a safe driving initiative because [there was] a bad increase in fatalities and injury accidents on our streets.” He said police have impounded 300 cars for drag racing.

“You can see that the numbers are quite alarming,” he said, adding that the only redeemer is that there hasn’t been any fatalities since the crackdown.

“We’re going to continue to educate and enforce,” he said. “The safety of our community comes first.”