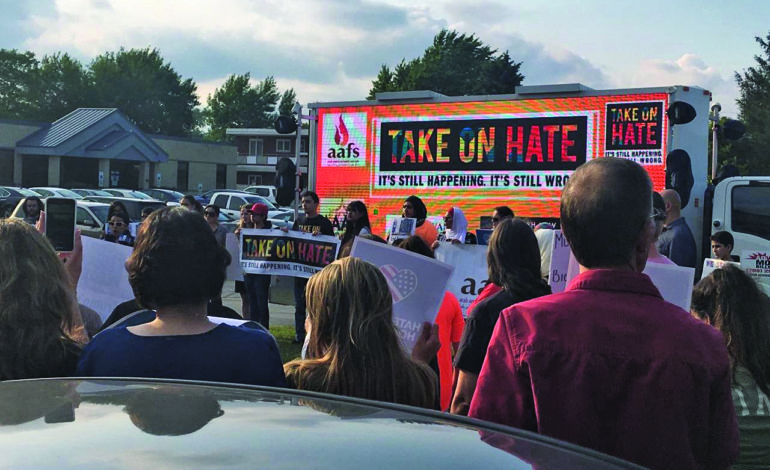 Community members took turns sharing their opinions at the township rally. Hundreds were lined up to speak at the township meeting inside the hall, which could only hold 40 people at a time

PALOS TWP., IL — On Monday, July 10, residents of this Chicago suburb rallied before a township meeting in support of the resignation of Township Trustee member Sharon Brannigan due to the discovery of hate speech targeting Arab American and Muslim students in the community.

“We saw her singling out our children,” said Itedal Shalabi, co-founder and director of Arab American Family Services (AAFS). “We are trying to say no to hate, not in our backyard. This hit our community, and our children deserve to be living in an environment free of hate.”

Itedal said that since Brannigan targeted the Arab American students in the community, it has been discovered that her Facebook account has displayed hate speech dating as far back as 2015.

“She is paying people to scrub her history,” Shalabi said of Brannigan. “She was born and raised in a well-known suburb, Mt. Greenwood, known for racism against its Black community.”

Shalabi also said people who are initially ignorant get to know Arab Americans and the challenges the community faces end up less likely to engage in hate speech, while those who are racist continue to spew hate even after they’re confronted. “What’s Palos doing?” Brannigan asked on the Facebook page that began the mobilization efforts for her resignation. “Why are all our schools filling with Middle East students without proper documentation? What is Dan Lipinski Third District [Congressional] rep. (D) doing about it?”

Inside the township room, Brannigan addressed the community by saying that her comments on social media were merely free speech; that her words are given her protection under the First Amendment.

In a post from May 20, Brannigan mentioned President Trump’s trip to the Middle East and said she was “proud that our women are not wearing the headscarves” and “we American women are being represented with dignity.”

“We had close to 300,” Shalabi said about attendees at the rally. “We rallied around the support of our mainstream friends. We were under a microscope after 9/11 and we grew at that time to build partnerships and connect.”

Shalabi added that many non-Muslim and non-Arab allies came out to the rally to condemn Brannigan’s comments as well as request her resignation.

Kawar said that hate speech is criminal and that there are consequences; Brannigan is hiding behind the First Amendment.

Palos Township does not have any protocol in place for anyone to force Brannigan to resign, according to Kawar. Roughly 30 percent of the residents in Palos Township area are of Arab American descent or are Muslim; it is part of the third largest community of Arab Americans in the nation.

Youth from the Palos Township Arab American community spoke at the township meeting about how they will not tolerate hate and how some of them are straight-A students, members of sports teams and also volunteering in the community. The teens made points about how they are part of the American fabric, just like everyone else, and shouldn’t be treated differently.

“Our young people are brave,” Kawar said. “They are well spoken. They are organizing. The young people came with those statements.”

Kawar said the AAAN has programing to educate the youth on empowerment in the face of injustice. He also said hate speech like Brannigan’s affect multiple communities such as the Black, Latinx, LGBTQIA and other marginalized groups. He said Brannigan’s statements are not new, but only highlight that more efforts to combat hate need to continue so that multiple minority and marginalized groups can be free of being targeted by prejudice.

Brannigan has since deleted her social media posts. Another township meeting will take place on August 14, and Shalabi and Kawar’s organizations, along with other Arab American, Muslim and mainstream groups, will be strategizing on how to continue the fight against the rhetoric being perpetuated by people like her.