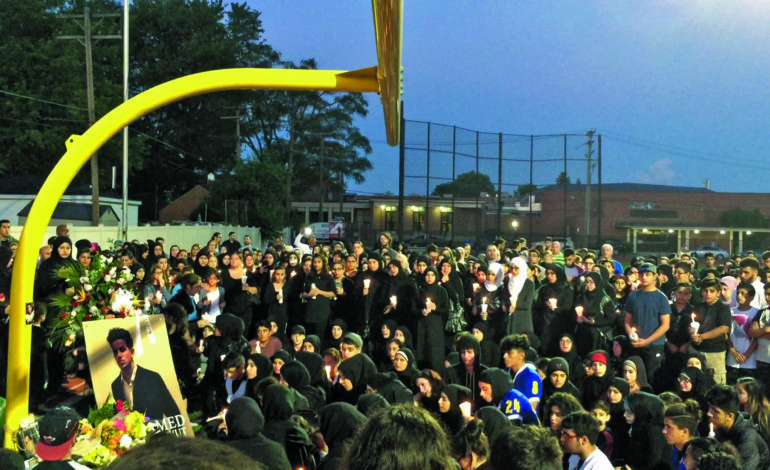 Mourners at Wutwut vigil, July 10 - Photo by The AANews

DEARBORN HEIGHTS — On July 10, a vigil was held at Star International Academy’s football field to honor Mohammed Wutwut. Wutwut, 15, drowned on July 8 in Cass Lake, according to authorities.

The vigil was scheduled to begin at 9 p.m., but attendees came early to console one another. Family, friends, and community members gathered in the north end zone underneath the uprights. About 30 mourners knelt directly underneath the goalpost. They were surrounded by at least two television news camera crews, photographers and hundreds of other standing mourners. At one point a drone flew over the field, documenting the vigil.

Once the candles were lit, the community began to share stories of their interactions with Wutwut. One Star International faculty member said Wutwut was an ideal 6’1″ 200 lbs. man, and when he spoke to you, he made you feel like you were 6’1″, 200 lbs. as well.

Star International Football Coach Nick Margo said Wutwut was the heart of the team and everything they do this season will be for him.

Wutwut’s older sister also spoke to the crowd about her brother’s leadership and said people, including herself, looked up to her younger brother. She also said when she finally saw her brother’s body that night, he was smiling.

The tears shed for Wutwut that evening could have filled Cass Lake 10 times over. The crowd was primarily dressed in black, absent the football players wearing their jerseys.

Iman Mohammad Ali Elahi also spoke, providing prayers and advice during the vigil and reminded the community, “your education, your faith, your action, your love and passion make you an angel.”

According to the Centers for Disease Control and Prevention “between 2005 and 2014 there was an average of 3,536 fatal unintentional drownings (non-boat related) annually in the United States.”

Cass Lake, located in Waterford, is 1,280 acres and “has big weed beds next to deep water,” according to The Department of Natural Resources website.

According to a report by WXYZ, the place where Wutwut was swimming had a steep drop-off, quickly going from two or three feet deep to nine feet deep, and just after that dropping down an additional 60 feet.

According to an earlier report from the AANews, witnesses said the 15-year-old from Dearborn was swimming in a shallow part of the lake; he went underwater and never resurfaced.

Wutwut was last seen shortly after 6 p.m. Saturday, June 8. His body wasn’t found until 12:45 a.m. Sunday, despite divers being in the water within 15 minutes of the emergency call, according to a report from the Detroit Free Press.

A funeral was held on Tuesday at the Karbalaa Islamic Educational Center in Dearborn, followed by burial at the Islamic Memorial Gardens in Westland.