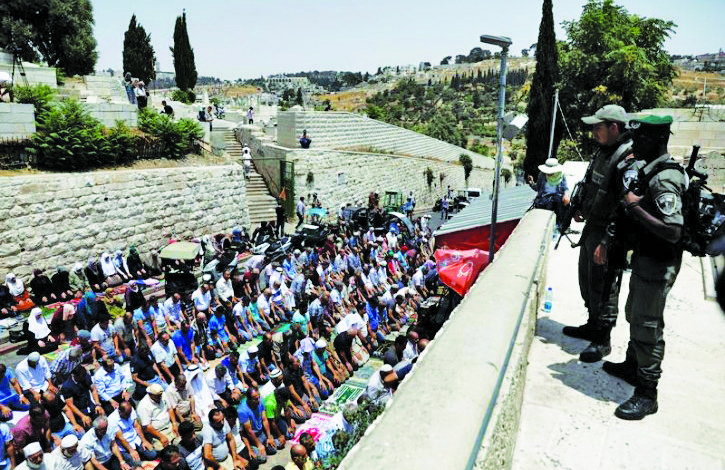 Israeli soldiers stand guard as Palestinians pray at the entrance to Jerusalem's Old City, in protest over Israel's new security measures at the compound housing al-Aqsa mosque - Photo by Reuters

JERUSALEM — For the first time in decades, Israel closed the al-Aqsa mosque compound in Jerusalem’s Old City to worshipers on Friday, July 14.

The closure followed an attack near an entrance to the compound that houses the al-Aqsa mosque, one of the holiest sites for Muslims, following a deadly shootout that killed two Israelis and three Palestinians.

Three Arab-Israeli gunmen shot dead two Israeli policemen, fled back into the compound and were killed by Israeli occupation forces after an exchange of fire.

Since the killings on Friday morning, Israel has arrested dozens of employees of the Waqf, the Islamic trust that oversees the holy site.

When the compound was reopened two days later, Palestinians and Waqf officials refused to enter, objecting to metal detectors installed by Israel.

Activist began staging sit-ins and prayed in the streets around the compound in protest of the Israeli restrictions.

Muslim religious authorities say the metal detectors violate a delicate agreement on worship and security arrangements at the Jerusalem site and have urged Palestinians not to pass through.

There have been nightly confrontations between Palestinians hurling rocks and Israeli police using stun grenades in Israeli-annexed East Jerusalem since the devices were placed at entrances on Sunday. Israeli forces have injured scores of worshipers as protests continued into Tuesday night.

The preacher of Jerusalem’s Al-Aqsa Mosque, Sheikh Ikrema Sabri, was discharged from the hospital on Wednesday after he was injured by an Israeli rubber bullet a day earlier.

“These detectors are an assault to the Al-Aqsa Mosque and interference in Muslim affairs,” Sabri said.

In the West Bank on Thursday, a Palestinian tried to stab two Israeli soldiers and was shot dead, the Israeli army said. It was not immediately clear if the alleged attack was prompted by the tensions over the holy site.

Ismail Haniyeh, leader of the Hamas movement, called on Palestinian demonstrators to confront Israeli troops along the enclave’s border on Friday.

“Let Friday be a turning point in the battle in the defense of Jerusalem and al-Aqsa,” Haniyeh said in a televised speech.

Netanyahu held security consultations over the issue on his return to Israel from visits to France and Hungary. Israeli Public Security Minister Gilad Erdan said Netanyahu was expected to decide on a course of action during the evening meeting.

Far-right members of Netanyahu’s government have publicly urged him to keep the devices in place at the flashpoint site. But Israeli media reports said security chiefs were divided over the issue amid concerns about wider Palestinian unrest.

The encroachment on al-Aqsa is spearheaded by the so-called Temple movement – messianic Jewish extremists who seek to replace the existing al-Aqsa mosque with a Jewish temple, said Independent journalist Dan Cohen.

While once on the fringes of Israeli society, this movement has gained power in Israel as well as support from the Israeli government.

Cohen said that there has been a “theocratization” of the Israeli military and institutions.

“Now this movement to destroy the al-Aqsa compound is positioned as the tip of the spear in the Zionist project, in Israeli society, against Palestinians,” he added.