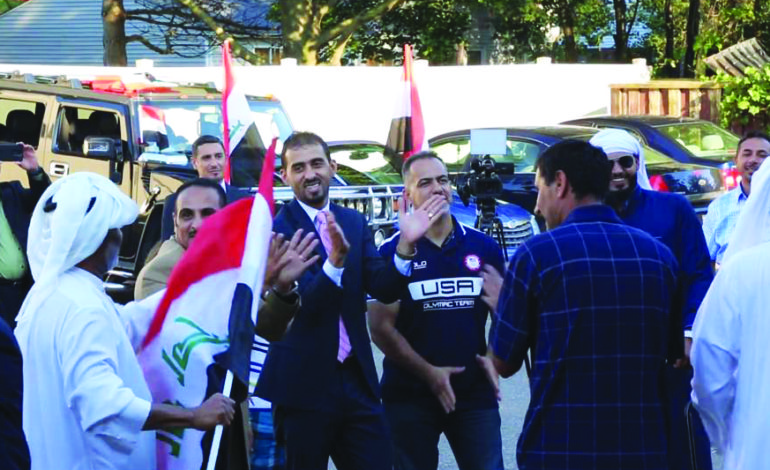 SOUTHFIELD — The liberation of Mosul from ISIS was a formidable victory for Iraq. But for Iraqi Americans, it was an exhilarating and unifying experience during a time of great scrutiny.

The extremist group had left a trail of devastation wherever they set camp and strained relations between Western and Arab World governments.

But on Monday, July 10, Iraq’s prime minister declared victory over ISIS in Mosul, three years after the militants seized the city and made it the stronghold of a “caliphate” they said would take over the world.

For Iraqi Americans and allied community members in Michigan, ISIS’ defeat meant a near-end to persecution — and cause to party. The Iraqi Consulate in Detroit held one of several celebrations on Saturday that drew Iraqi, Lebanese, Yemeni and other community members, along with diplomats and government officials like Rep. Brenda Lawrence (D-Southfield), Muslim and Christian and non-profit organization leaders, said Almanhal Alsafi, consul general of Iraq in Detroit. Some of them participated in tradition Iraqi dances.

“It wasn’t a Shi’a victory or a Sunni victory,” he said. “It was an Iraqi victory and you really felt that.”

Alsafi said he personally participated in four celebrations that weekend.

“Everybody thought when Mosul fell more than three years ago to ISIS, that it would never return to Iraqi sovereignty, and that ISIS would eventually move into Baghdad,” he said.

Alsafi said the coalition teamed up after a fatwa (or ruling) by Grand Ayatollah Ali al-Sistani called for a jihad against ISIS.

ISIS committed horrendous atrocities, but the fight is not over yet, he added. He said up to three pockets in small towns are yet to be liberated.

The Iraqi government is now facing challenges of rebuilding and restoring services to solve the humanitarian crisis, and hopefully encouraging displaced residents to move back to their neighborhoods in Mosul, he said.

Alsafi called on allied countries in helping Iraq rebuild and take care of wounded who fought against ISIS.

“We need to work hard to heal the wounds of this battle,” he said.

He attributed the victory partly to the strengthened relationships between Iraqi and U.S. military cooperation and counterterrorism efforts that include shared intelligence, military advisors and training.

That is why Iraq was surprised when the country was among the countries placed on President’s Trump’s initial executive order banning its citizens from traveling to the United States, Alsafi said.

But in early May, Iraq was taken off the list due a recognition by U.S. officials of the importance of an Iraqi coalition to defeat ISIS.

Alsafi said the consulate explained that to the secretary of defense, the secretary of state and the national security advisor. The American embassy in Baghdad also chipped in and assured the U.S. departments that the Iraqi embassies and three consulates in the U.S. are in constant communication with Iraq’s government, including its ministry of interior, which overseas policing and border control.

“There was a lot of misunderstanding at the beginning,” he said. “The American government based its executive order on a previous recommendation by Congress, which had the countries on a blacklist.”

But he said things are different now, thanks to continued cooperation.

Alsafi said there have been fewer Iraqis requesting refugee status once the travel ban no longer included the country. But either way, the executive order had only affected a small number of Iraqi refugees admitted into the U.S., he added.

Alsafi said one of the most prevalent issues facing the Iraqi American community is the lack of original official documents required to make travel and business between Iraq and the U.S. possible, including proof of Iraqi citizenship.

Among other functions, he said the consulate’s role is to provide Iraqi government services to nationals living in the U.S., including issuing of passports and birth and death certificates. What they do not get involved in is politics, he added.

The consulate in Detroit serves Iraqi Americans in 15 states in the Midwest, but the office accommodates any national in the U.S. and Canada, he said.

Alsafi said they have about 300,000 individuals from those states on file. Almost 80,000 of them live in Illinois.

He said the majority of Iraqi Americans in the region are Christians, who immigrated along with Lebanese travelers to the U.S. in large numbers starting in 1914.

The 1991 Gulf War, during which a 35-nation coalition fought against Iraq for its invasion of Kuwait, caused many Muslim Iraqis to flee and settle in the U.S., he added.

The consulate in Detroit opened its doors in September 2009. Alsafi became the consul general in 2012. His term in office will end on August 1, after which he will travel back to work at the consulate headquarters in Iraq for about four years. He boasted improved processing time and quality of service during his tenure and said he hopes to return to the U.S. and continue his service as an ambassador.