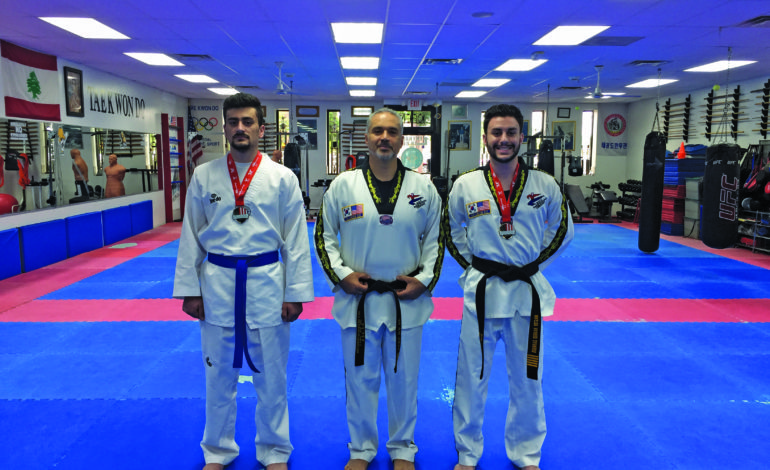 DEARBORN — The 2017 National Championships for U.S.A. Taekwondo took place at the Cobo Center in Detroit from June 30 to July 6. This marked the first time in nine years that the championships took place in Michigan. Athletes from the Dearborn-based Koubeissi Taekwondo School brought home two silver medals and one bronze. Dakroub, now a fifth-degree black belt, said he cannot train as much as his competitors, but the work they put in at Master Koubeissi’s school is very intense. It also helps that Dakroub began his Taekwondo career at 6-years-old. Koubeissi said it’s never too late to start though. Aoude began fighting just two years ago and is already a blue stripe belt, about to graduate to a red belt.

Dakroub didn’t plan to participate in the national championships if they’d be held out of state. However, once he heard they were being held in Detroit he asked himself, “How can I not compete in my own backyard?”

Dakroub and Aoude are scheduled to go to Colorado Springs in January to compete at team trials for the USA National Team. They’ve already begun training.

It was the first trip to the national championships for Aoude.

“It was unlike any other tournament,” he said. “In the beginning, when you go it’s very organized. Everyone is wearing a suit and a tie; it’s no joke.”

“You just do as you’re told and you just trust it,” Dakroub said, when it comes to having a coach as skilled as Master Koubeissi. “It allows you to make it as far as we have as a school, collectively. There’s a reason for that and it’s not just because of me or Ali; it’s because we have a great support system in our coach. He’s the one that leads the way for us. That’s the only reason we are able to make it that far.”

Koubeissi said Taekwondo is about “self-discipline, confidence and self-respect.”

Aoude will be beginning his junior year at the University of Michigan-Dearborn in the fall. Dakroub will continue to practice law full time. They both plan to continue the sport for as long as they can because, as Dakroub said, “it’s my rush.”