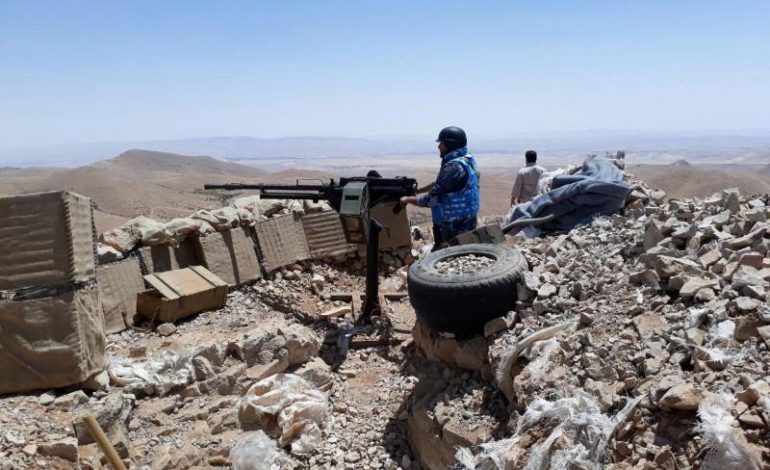 Fighters from the Syrian army units and Hezbollah are seen on the western mountains of Qalamoun, near Damascus, in this handout picture provided by SANA on July 23, 2017, Syria.

BEIRUT – Hezbollah said on Monday its battle with Nusra Front jihadists at the Syria-Lebanon border was almost over and urged remaining insurgents in the area to give up, pressing its campaign to take their last foothold at the frontier.

With the Nusra Front almost beaten in the mountainous area on the outskirts of the Lebanese town of Arsal, the next phase is expected to focus on adjacent territory held by ISIS militants.

“We call on all militants … to spare their blood and throw down their weapons,” declared a statement from “resistance operations command” published by Hezbollah-run media.

The Lebanese group was key to the defeat of militants in the Qalamoun area further south in 2015, and at the Syrian town of Qusair, north of Arsal, in 2013.

The offensive, launched on Friday, has so far focused on militants from the former Nusra Front, which severed ties with al Qaeda last year and rebranded to head the Hayat Tahrir al-Sham alliance.

“The biggest part of the operation has finished, practically speaking, with the seizing of Wadi al-Kheil. Now it’s a question of flushing out and searches – then preparation for the fight against Daesh (ISIS),” a security source said.

Hezbollah’s military media unit said its fighters had advanced early on Monday from several directions to capture the Wadi al-Kheil valley in Juroud Arsal, a barren mountainous border zone that has served as a base for militants linked to al Qaeda and ISIS.

The advance gave Hezbollah control over what had been “the most important base (in the area) for Nusra Front,” the media unit said in a statement.

The Lebanese army, which is not taking part in the operation, has set up defensive positions around Arsal, the Lebanese town where aid workers have prepared to help host Syrian refugees living in camps in Juroud Arsal.

U.N. refugee agency UNHCR said that so far only around 250 of the thousands of refugees in the area had fled for Arsal.

On the Syrian side of the border, the Syrian army and Hezbollah recaptured the area around the town of Fleita on Sunday, the Syrian state news agency SANA said.