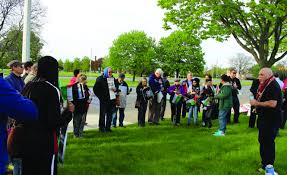 DEARBORN — The outcries of thousands of Arab and Muslim American men, women and children from outside Dearborn’s City Hall could once be heard throughout the nation.

While demonstrating in a mosaic of green, red and white, Dearborn’s Arab Americans were branding a newfangled Arab unity, amid divisions in their homelands.

Since Israel was founded in 1948, activism around the Palestinian struggle has defined an important aspect of many Arab Americans’ identities.

The conflict still persists and has become more heated in recent months.

In April, more than 1,500 Palestinian prisoners joined a hunger strike in protest of their conditions. People all over the world organized demonstrations and vigils. Some have participated in the “#SaltWaterChallenge”, in which they share videos of themselves drinking salted water— the sustenance on which the prisoners survived during the strike.

In July, Israel closed the al-Aqsa mosque in Jerusalem’s Old City to worshippers for the first time in decades. The closure followed a deadly shootout that killed two Israelis and three Palestinians.

The security measures provoked days of unrest, with violent clashes on the streets of East Jerusalem. Israeli forces shot dead four Palestinians, and a Palestinian man stabbed and killed three Israelis in their home in the Israeli-occupied West Bank.

Amid rising tensions, people around the world have reacted sternly against Israel’s actions.

But Metro Detroit, where the highest concentration of Arab Americans live, has seen fewer demonstrations and education around the issue than in previous years, several activists and organizers told The AANews.

Such protests drew thousands of passionate community members to Dearborn’s streets. Ali Jawad, founder of Leaders Advancing and Helping Communities (LAHC, formerly the Lebanese American Heritage Club), said he remembers when an organization he was a founding member of, the Arab American Congress, could organize for about 10,000 to demonstrate in Dearborn.

But when other Arab countries became struck with their own crises and Palestinians themselves became split over military and political control in Gaza, the Arab American Congress saw dwindling community interest over Palestine and disbanded, Jawad said.

Nevertheless, he said protesting became ineffective and has the potential to project bad PR. Social media has been a better tool in educating Arab and other Americans about the complex conflict, Jawad added.

An organizer at USPCN-Detroit, George Khoury, told The AANews they focus more on educational events like organizing documentary screenings and panels, than protesting. They would be lucky if a rally would earn more than 30 seconds of airtime on national news stations, he added.

But people still do not show to up the events as they used to, even within the local Arab American community, he said.

Khoury said Arab Americans already struggle to make their voices heard by elected officials, so many believe the American government is unlikely to change its mind regarding its diplomatic and military relationship with Israel.

In fact, there are lobby groups working to make such opposition against Israel illegal. Fear of potentially breaking the law is also a deterrent to activism, Khoury added.

Two bipartisan bills, House Bill 5821 and House Bill 5822, passed by the Michigan House and Senate in December and signed by Governor Snyder, make it a crime to support or even reveal information about a boycott directed at Israel or its businesses.

Legislation recently introduced in the U.S. Senate would do accomplish same, and violators would face criminal penalties of up to $1 million and 20 years in prison.

More than 5,000 people in Dearborn demonstrated in response to the war on Gaza, March 2002 – Photo from The AANews archives

Still, Khoury said the USPCN has been engaging more with officials and other groups— including the Black Lives Matter movement— to keep talks open and draft letters to lawmakers, like U.S. Rep. John Conyers (D-Detroit) and 32 other members of Congress in support of Palestinian rights. That letter was sent to the Israeli embassy and Michigan Democratic Party, he added.

Daad Katato, a local Palestinian activist, said the local disinterest is a reflection of sectarian divisions in the Middle East.

“Palestinian Muslims and Christians were united for a cause, while Arab Sunni and Shi’a [leaders] are shamefully fighting each other in several Middle Eastern states,” Katato said.

She said both protests and social media awareness campaigns should be utilized, but blamed the disconnect and little education around the Palestinian struggle among Arab American youth on their parents.

She pointed to Palestinians’ victory in pressuring Israeli Prime Minister Benjamin Netanyahu to remove restrictions at the site of the al-Aqsa mosque. Demonstrators’ success using few resources should be an inspiration for Arab Americans that state and federal officials could listen to their demands.

While some see a decline in the involvement of youth in mobilizing efforts in Detroit and Dearborn, many students are taking it upon themselves to change that narrative.

Summer Baraka, president of Students for Justice in Palestine at Wayne State University, said she makes it a priority to educate her peers on the issue. She added that she often spends more time educating Arab American students who display a surface level understanding of the struggle, than she does to White or Jewish students during many tabling events the group hosts.

In the early 2000s, most of the spotlight in the Middle East was on Iraq and Palestine. But the political landscape in Arab World looks different in 2017, as almost every country grapples with its own, but inter-connected crisis.

“The Arab world has many issues,” Baraka said. “People don’t know where to put their griefs. It’s emotionally exhausting to have to feel for so many different things. [Palestine’s] importance has become diluted.”

Baraka said anti-BDS laws have magnified intimidation and even caused a friend to abandon pro-Palestinian activism in fear of retribution in her professional career.

Hatem Abu Dayyeh, a member of the national USPCN coordinating committee, is no stranger to what he also calls intimidation tactics and suppression of free speech by government officials to weaken resistance efforts against Israel.

In September 2010, a year after the organization was founded, the FBI raided his and other USPCN organizers’ homes in Chicago and Minnesota, alleging they were providing material support to a foreign terrorist organization.

Material support had always meant providing weapons and financial backing, but a 2008 Supreme Court decision included speech on the list, he said.

A grand jury subpoenaed 23 USPCN organizers, linking them to the Palestinian liberation movement, but no one was indicted, he said.

“They want to suppress the support movement and frighten people,” he said. “And they’ve succeed on a certain level.”

Soon after, Abu Dayyeh said the USPC regrouped and has since become the leading organization, with seven chapters nationwide.

While pro-Palestinian activism seems sluggish in Metro Detroit, he said communities in Chicago, New York and San Francisco are demonstrating invigorated enthusiasm and grasp of the conflict.

Abu Dayyeh noted that Palestinians make up about 70 percenct of Chicago’s Arab American population, hence the strong movement there.

He added that college students in campuses across the country are also making great strides in BDS and work around Palestine, he added.

The problem is a lapse in engagement after they graduate; few institutions exist that can carry their efforts to the larger stage of community activism.

“There isn’t a hub institution in Detroit that has the capacity to organize and the coalition necessary to build the mass mobilization,” Abu Dayyeh said.

He added that many Arab American parents who were once deeply entrenched in the struggle are no longer active themselves and no longer pass the sentiment of activism to their children.

He said he disagrees that demonstrating is ineffective, pointing to the civil rights movement and the judicial decisions to halt President Trump’s travel ban.