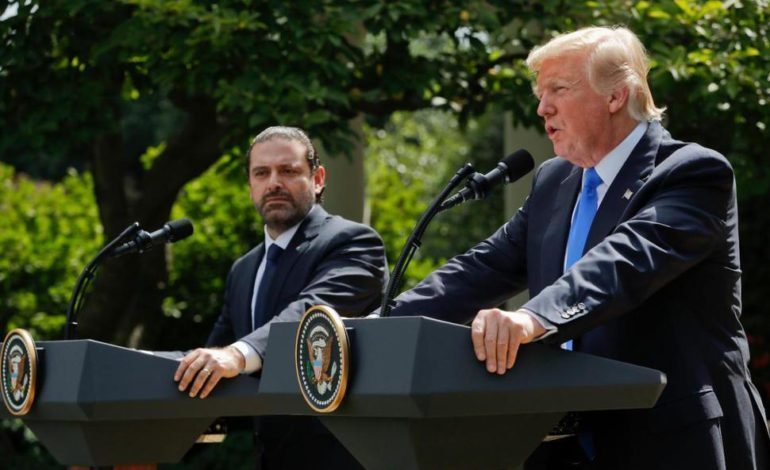 WASHINGTON – Questions have once again been raised over President Donald Trump’s grasp on foreign policy after he appeared to misunderstand the political and militery role played by the pwerful Lebanese party of  Hezbollah in the Middle East’s complex geopolitics.

During a news conference with Lebanese Prime Minister Saad al-Hariri in the White House’s Rose Garden on Tuesday, Mr Trump was asked about his position on the Hezbollah group.

“The prime minister and I have just concluded an extensive conversation about the challenges and opportunities facing Lebanon and its neighbours,” Trump said.

Hezbollah was a “menace” from within to the Lebanese people and the region, Mr Trump added.

“Lebanon is on the front lines in the fight against Isis, al-Qaeda and Hezbollah. The Lebanese people, of all faiths, are working together to keep – and you know this, and we’ve been discussing this at great length – their country safe and prosperous.”

While the US has condemned Hezbollah as a terrorist group, and Congress is considering stepping up sanctions, its political wing is the most powerful entity in Lebanon’s deeply divided coalition government. 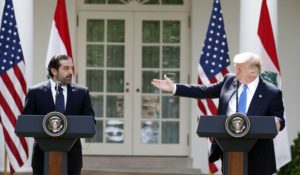 Hezbollah is engaged in tough battles with ISIS and other terrorist groups both in the north and over the border in Syria. Also, stands guard against Israeli threat in the south of Lebanon.

The response was met with silence from Prime Minister Hariri, for whom Hezbollah is a de facto power sharing partner under the Lebanese constitution, which guarantees Muslim and Christian representation at the highest levels of government.

Hezbollah fighters is engaged in fighting Isis and other terrorist groups both in the north of Lebanon and over the border in Syria, where it is allied with the Syrian army that is loyal to President Bashar al-Assad. Also, standing guard against Israeli continuous threat in the south of the country.

In response to a follow up question about the US’ position on Hezbollah, Mr Trump said he would clarify his position “in the next 24 hours”.

Speaking to reporters later in the day, Mr Hariri was careful to sidestep questions about whether the president did not understand Hezbollah’s function within the Lebanese state and outside it.

He also said he had spoken at length to Mr Trump about how sanctioning banks which do business with the group could harm the Lebanese banking industry in general.

The Lebanese premier was visiting Washington DC to lobby for more U.S. economic support for his country, which is struggling to cope with an estimated 1.5 million Syrian refugees – equivalent to one in four of the population.

The State Department has pledged an additional $140 million to assist with the crisis.

Mr Trump also promised continued American military help to prevent Isis and other militant groups from gaining a foothold in the country.

He did not specify what form the help would take, or how much support the US is willing to give.