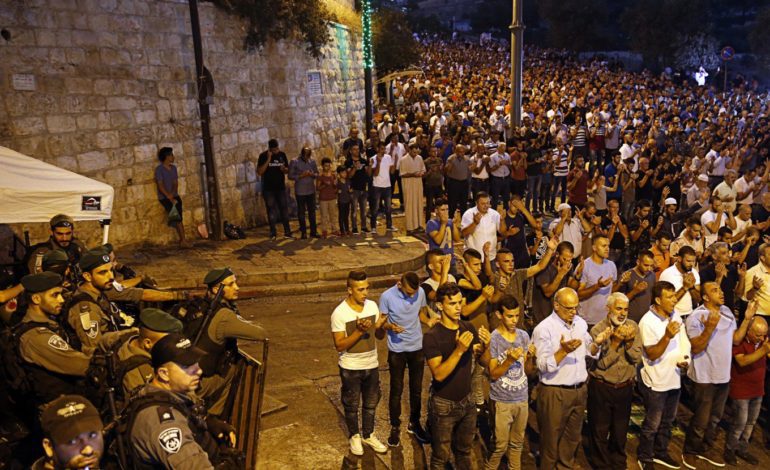 "We will sacrifice ourselves for Al-Aqsa!" chanted the throng outside Islam's third holiest shrine.

JERUSALEM – Thousands of Muslim worshippers surged into Jerusalem’s Al-Aqsa Mosque on Thursday and at least 113 were hurt in scuffles with police after Israel lifted security measures imposed at the sacred site in the face of days of violent protests.

Chaotic scenes unfolded as Israeli forces used stun grenades to try to control crowds charging forward when the last gate Muslims use to enter Al-Aqsa was opened after a stand-off lasting several hours.

“We will sacrifice ourselves for Al-Aqsa!” chanted the throng outside Islam’s third holiest shrine. Several young men clambered onto the mosque’s roof to affix Palestinian flags, which Israeli forces soon confiscated. Netanyahu’s decision followed days of diplomatic effort by the United Nations, the involvement of U.S. President Donald Trump’s Middle East envoy and pressure from Muslim Arab powers in the region.

One of these, Jordan, continued to fume at Netanyahu over the shooting deaths of two of its citizens by an Israeli Embassy guard in Amman on Sunday. Israel repatriated the guard to a hero’s welcome, saying he had fired in self-defense against an attack that may have been spurred by pro-Palestinian sentiment.

The Al-Aqsa dispute erupted after Israel installed metal detectors at Muslim entrances to the compound, known to Muslims as the Noble Sanctuary and to Jews as Temple Mount, following the July 14 killing of two Israeli police guards by gunmen who had concealed weapons inside the walled plaza.

The unannounced move provoked days of unrest, with violent clashes on the streets of East Jerusalem. Israeli forces shot dead four Palestinians, and a Palestinian knifed three Israelis to death in a settlement home in the Israeli-occupied West Bank.

For the past two weeks, Muslims refused to enter Al-Aqsa, instead praying in streets around Jerusalem’s Old City.

Earlier on Thursday, the Waqf Muslim trust that manages the mosque declared itself satisfied that Israeli authorities had scrapped all the new security measures and reverted to the set-up before July 14. The Waqf urged Muslims to return to Al-Aqsa.

Palestinian political factions issued statements supporting the Waqf that looked likely to help defuse the unrest. Before the announcement, factions had been calling for a “day of rage” on Friday, raising concerns about another round of bloodshed.

Jordan, which signed a peace treaty with Israel in 1994 and has been custodian of the Muslim holy sites in Jerusalem since 1924, said Israel’s removal of the extra security was an “essential step to calm the situation”.

But, facing domestic outrage over the Israeli Embassy deaths, Jordan’s King Abdullah excoriated Netanyahu for embracing the guard involved after demanding he return without being investigated.

Netanyahu’s conduct had been “provocative on all fronts and enrages us, destabilizes security and fuels extremism,” Abdullah said in a statement, adding that bilateral relations were at risk if the guard were not brought to trial.