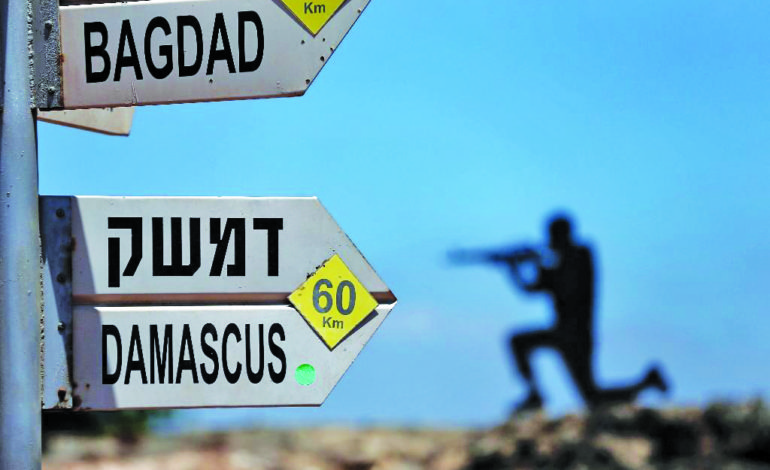 At Mount Bental, a popular lookout point on a hill overlooking the Syria and Lebanon borders from Israel.

Israel, which has played a precarious role in the Syrian war since 2011, is furious to learn that the future of the conflict is not to its liking.

The six-year-old Syria war is moving to a new stage, perhaps its final. The Syrian regime is consolidating its control over most of the populated centers, while ISIS is losing ground fast — and everywhere.

Areas evacuated by the rapidly disintegrateing militant group are up for grabs. There are many hotly contested regions sought over by the government of Bashar al-Assad in Damascus and its allies, on the one hand, and the various anti-Assad opposition groups and their supporters, on the other.

With ISIS largely vanquished in Iraq — at an extremely high death toll of 40,000 people in Mosel alone — warring parties there are moving west. Shi’a militias, emboldened by the Iraq victory, have been pushing westward as far as the Iraq-Syria border, converging with forces loyal to the Syrian government on the other side.

Concurrently, first steps at a permanent ceasefire are bearing fruit, compared to many failed attempts in the past.

Following a ceasefire agreement between the United States and Russia on July 7 at the G-20 meeting in Hamburg, Germany, three provinces in southwestern Syria — bordering Jordan and the Israeli-occupied Golan Heights — are now relatively quiet. The agreement is likely to be extended elsewhere.

The Israeli government has made it clear to the U.S. that it is displeased with the agreement and Israeli Prime Minister Benjamin Netanyahu has been leading strong efforts to undermine the ceasefire.

Netanyahu’s worst fears are, perhaps, actualizing: A solution in Syria that would allow for a permanent Iranian and Hezbollah presence in the country.

In the early phases of the war, such a possibility seemed remote; the constantly changing fortunes in Syria’s brutal combat made the discussion altogether irrelevant.

But things have now changed.

Despite assurances to the contrary, Israel has always been involved in the Syria conflict. Israel’s repeated claims that “it maintains a policy of non-intervention in Syria’s civil war” only fools U.S. mainstream media.

Not only was Israel involved in the war, it also played no role in the aid efforts; nor did it ever extend a helping hand to Syrian refugees.

Hundreds of thousands of Syrians have perished in the merciless war; many cities and villages were totally destroyed and millions of Syrians become refugees.

Tiny and poor Lebanon has hosted more than a million Syrian refugees; every country in the region and many nations around the world have hosted Syrian refugees, as well. Except Israel.

Even a symbolic government proposal to host 100 Syrian orphans was eventually dropped.

However, the nature of the Israeli involvement in Syria is starting to change. The ceasefire, the growing Russian clout and the inconsistent U.S. position has forced Israel to redefine its role.

A sign of the times has been Netanyahu’s frequent visits to Moscow, to persuade the emboldened Russian president, Vladimir Putin, of Israel’s interests.

While Moscow is treading carefully, unlike Washington, it hardly perceives Israeli interests as paramount. When Israel shot down a Syrian missile using an arrow missile last March, the Israeli ambassador to Moscow was summoned for a reprimand.

The chastising of Israel took place only days after Netanyahu visited Moscow and “made it clear” to Putin that he wants to “prevent any Syrian settlement from leaving ‘Iran and its proxies with a military presence’ in Syria.”

Since the start of the conflict, Israel wanted to appear as if in control of the situation, at least regarding the conflict in southwestern Syria. It bombed targets in Syria as it saw fit and casually spoke of maintaining regular contacts with certain opposition groups.

But without a joint Israeli-U.S. plan, Israel is now emerging as a weak party. Making that realization quite belatedly, Israel is become increasingly frustrated. After years of lobbying, the Obama administration refused to regard Israel’s objectives in Syria as the driving force behind his government’s policies.

Failing to obtain such support from President Trump as well, Israel is now attempting to develop its own independent strategy.

On June 18, the Wall Street Journal reported that Israel has been giving “secret aid” to Syrian rebels, in the form of “cash and humanitarian aid.”

The New York Times reported on July 20 of large shipments of Israeli aid that is “expected to (give) a ‘glimmer of hope’ for Syrians.”

Needless to say, giving hope to Syrians is not an Israeli priority. Aside from the frequent bombing and refusal to host any refugees, Israel has occupied the Syrian Golan Heights since 1967 and illegally annexed the territory in 1981.

Instead, Israel’s aim is to infiltrate southern Syria to create a buffer against Iranian, Hezbollah and other hostile forces.

Termed “Operation Good Neighbor”, Israel is working diligently to build ties with various heads of tribes and influential groups in that region.

Yet, the Israeli plan appears to be a flimsy attempt at catching up, as Russia and the U.S.— in addition to their regional allies— seem to be converging on an agreement independent from Israel’s own objectives or even security concerns.

Israeli officials are angry and feel particularly betrayed by Washington. If things continue to move in this direction, Iran could soon have a secured pathway connecting Tehran to Damascus and Beirut.

Israeli National Security Council head Yaakov Amidror threatened in a recent press conference that his country is prepared to move against Iran in Syria, alone.

Vehemently rejecting the ceasefire, Amidror said that the Israeli army will, “intervene and destroy every attempt to build (permanent Iranian) infrastructure in Syria.”

This stands in sharp contrast from the days when the neoconservatives in Washington managed the Middle East through a vision that was largely, if not fully, consistent with Israeli impulses.

The famed strategy paper prepared by a U.S. study group led by Richard Perle in 1996 is of little use now, as the region is no longer shaped by a country or two.

The paper entitled, “A Clean Break: A New Strategy for Securing the Realm”, saw a hostile Arab world masterfully managed by the U.S. and Israel.

For a fleeting moment, Tel Aviv hoped that Trump would bring about change to the U.S. attitude.

Indeed, there was that euphoric movement in Israel when the Trump administration struck Syria. But the limited nature of the strike made it clear that the U.S. had no plans for massive military deployment similar to that of Iraq in 2003.

The initial excitement was eventually replaced by cynicism as expressed by this headline in the Monitor: “Netanyahu puts Trump on notice over Syria.”

In 1982, taking advantage of sectarian conflicts, Israel invaded Lebanon and installed a government led by its allies. Those days are long gone.

While Israel remains militarily strong, the region itself has changed and Israel is not the only power holding all the cards.

Moreover, the receding global leadership of the U.S. under Trump makes the Israeli-American duo less effective.

With no alternative allies influential enough to fill the gap, Israel is left, for the first time, with very limited options. γ