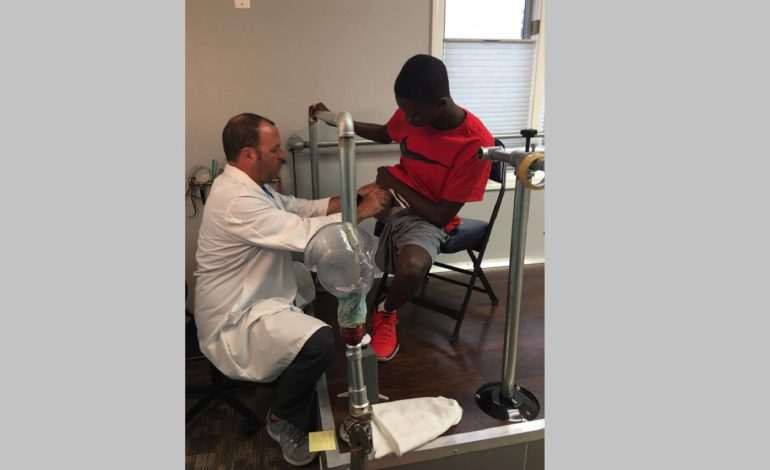 Muath at his host home – Photo by The AANews

DEARBORN HEIGHTS— In November 2012, a 12-year-old cancer survivor from Gaza arrived in Michigan to the open arms of Yasmeen Hamed and her family, who had hosted his three-month stay through the Palestinian Children Relief Fund (PCRF) — a non-profit organization devoted to “healing the wounds of war and occupation.”

After learning that Muath Abu Daher had lost his mother to cancer when he was 4-years-old and his leg to bone cancer at age 6, the PCRF initiated a fundraiser for his medical trip and found that a Dearborn-based orthopedic surgeon named Jiab Sulieman was willing to sponsor his case.

Abu Daher received his first prosthetic leg in February 2013. Now, the 16-year-old is ready for a new one.

The charming and poetic teenager has outgrown his prosthetic leg, said Hamed, president of PCRF Detroit.

Kainnon Vilminot of the Vilminot Prosthetics Clinic in Howell donated the leg to Abu Daher. He is the same professional who provided the first one, though he didn’t have his own business at the time.

“Muath has weekly appointments,” Hamed said. “Right now, he’s still in the fitting process to make sure there’s no pressure and it’s comfortable… His prosthetic leg is a bit more detailed than others because he really doesn’t have much of a stump, maybe a two to three inch one, so he has to have a belt to hold the leg in place.”

After the fitting process, Abu Daher will begin physical therapy, according to Hamed.

The Palestinian American woman has hosted four children under the chapter since its launch in Detroit six years ago. She said she stayed in touch with Abu Daher since he left three years ago and now that he’s back, she and her family are making his short stay worthwhile.

Abu Daher visited Niagara Falls, Cedar Point and Pittsburgh and may be heading to Florida soon with his host family.

“He’s a great kid,” Hamed said. “When he came back, we insisted on him getting to stay with us again… He’s older now and will remember, so we want to give him something to remember.”

“Who wouldn’t be happy here when they get to see Khalto (aunt) Yasmeen,” Abu Daher said in Arabic, beaming with joy.

Coming from a large household of nine members, Abu Daher said his favorite moments in Gaza involve family gatherings and parties. And like every other boy his age, he enjoys playing soccer with friends and video games.

The teenager of few words lives the crisis in Gaza every day, but believes in powering through.

Hamed said that some families in the Gaza Strip have five children diagnosed with cancer, with no way to leave due to the Israeli siege.

“We’re working on opening a pediatric oncology center there because the children in Gaza can’t leave or it’s very difficult for them to,” she said, adding that they have already opened one in Beit Jala.

Hamed also shared an instance where a child was permitted to leave for medical care, but without his parents.

Gaza has been under an Israeli and Egyptian blockade for a decade and around 1,500 people are diagnosed with cancer each year. No sufficient resources are available for these patients.

They must go through the Erez checkpoint process, but are usually blocked from crossing to receive adequate medical care in the occupied West Bank.

According to the World Health Organization (WHO), the rate of exit permits sanctioned to these residents plummeted as low as 44 percent in October 2016, compared with 82 percent in 2014 and 93 percent in 2012.

Hamed encouraged people to donate to the PCRF because thousands of children in similar and even worse situations in Palestine and throughout the Middle East are in need of medical attention.

“We have caseworkers throughout the Middle East,” she said. “So, whenever we know there is a case, we open a file on that child. If they can be helped where they’re at, then we can do that since PCRF sends teams of doctors from all over the world to the Middle East to assist those in need.”

If not, PCRF tries to fly the children out to different countries that can offer them the healthcare they need.

Other than financial aid, Hamed said volunteer opportunities include taking children to their doctors’ appointments, sitting with them at hospitals if they’re having surgeries, fundraising, shopping and more.

“There is always a way to help,” she said.

The humanitarian organization has also provided Abu Daher with tutors in Gaza to keep his grades up in school and set up a fund for his college education to ensure a bright future.

Abu Daher advised children undergoing similar struggles not to be sad, but to face them with all their might instead and be optimistic that their lives will get better, God willing.