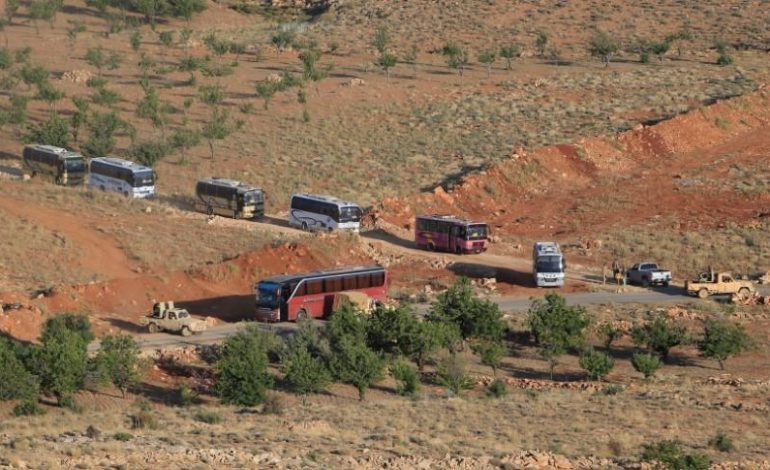 BEIRUT ― The transfer of thousands of Syrian militants and refugees from a Lebanese border region into rebel territory in Syria stalled for a second day on Tuesday.

Negotiations between Hezbollah and Nusra were ongoing and complex, the head of Lebanon’s General Security, Major General Abbas Ibrahim told reporters in north-east Lebanon on Tuesday.

Convoys of buses had arrived from Syria on Monday and Tuesday to collect thousands of fighters, their relatives and refugees from northeast Lebanon, but they had not begun to move as night fell on Tuesday.

Around 9,000 people are expected to be transferred, a Hezbollah media unit said on Sunday.

Last week, Lebanese militia Hezbollah took most of the mountainous zone of Jroud Arsal in a joint offensive with the Syrian army to drive Nusra Front militants from the area, which straddles the Syrian-Lebanese border.

A ceasefire with militants was reached on Thursday, which included the release of Hezbollah prisoners held by the Nusra Front in Syria.

On Tuesday Nusra Front’s leader in the Syrian Qalamoun mountain region told the Kuwaiti newspaper al-Rai the deal also includes the release of five of its Syrian members being held by Hezbollah and five more being held in a Lebanese prison.

Abu Malek al-Talli told al-Rai implementation of the agreement was being held up by disagreements between Hezbollah and the Lebanese government.

The Nusra Front was al Qaeda’s Syria branch until it severed ties last year. It now spearheads the Tahrir al-Sham Islamist alliance in the Syrian conflict.

The Lebanese army, which receives considerable U.S. and British military support, did not take an active part in the Jroud Arsal operation, setting up defensive positions around Arsal.

Lebanon hosts nearly 1.5 million refugees – around a quarter of its population. Most languish in severe poverty and several thousand live in makeshift camps east of the town of Arsal in a barren mountainous region.

The multi-sided Syrian conflict has killed hundreds of thousands of people over more than six years and driven at least 11 million from their homes – about half Syria’s pre-war population.