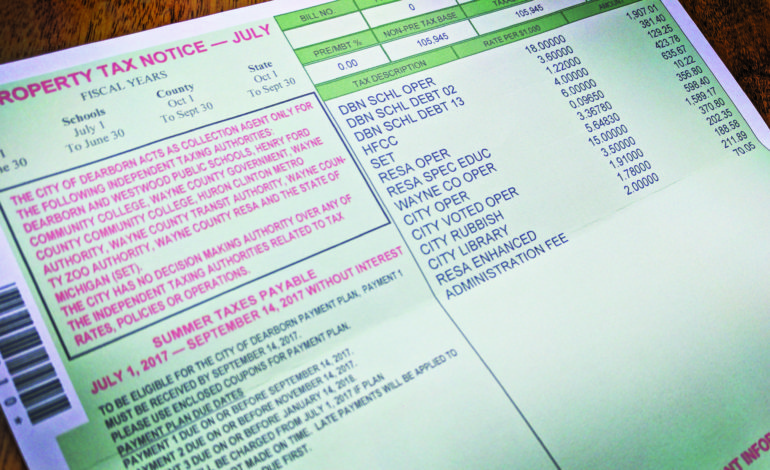 DEARBORN — Twice a year, homeowners in the city face one of the most dreaded days of the year – tax day.

Among other levied taxes, every homeowner pays a percentage of his or her property’s value to help operate and maintain the city’s services, like the Police Department, the schools and trash pickup. In addition, the city collects property taxes to the county and in some cases to the state.

Everyone must pay their dues. But those can have a heavier weight on people in cities with a young population and bountiful small businesses.

That is especially felt in Dearborn, notorious among its residents for its high property tax rate.

The subject of high taxes rates in Dearborn and the prospect of reducing the burdens has resurfaced during this year’s municipal primary election campaigns.

But why does Dearborn need to collect so much in property taxes, and what about the promises of some candidates to cut property taxes? Are they viable?

According to Public Information Director Mary Laundroche, Dearborn is an old town that needs much upkeep.

Twice annually, the city sends every property owner a bill – one on July 1 for summer taxes and another on Dec. 1 for winter taxes.

How much a person pays depends on the value of their residential or commercial property, which is determined by a city assessor. The property is compared to ones with a similar size and location in a comparable neighborhood and is usually set to the property’s market value. The more valuable the home, the higher the property tax.

A property tax bill includes a breakdown of how much a property owner is paying for main services, based on a percentage (millage). Each mill represents one thousandth of a dollar.

Bodies like the City Council work with other departments to formulate a city budget and determine how much is needed to cover the administration’s operation. Other agencies, like Dearborn School Board of Trustees, set the budget to run the public schools in the district and for Henry Ford College. Residents within Dearborn and Wayne County vote on millages to finance public projects. All of these are included into Dearborn’s property tax bills.

For example, the city requires a 33.5 mill (3.35 percent) of each dollar of your home’s worth to operate city services. Of that amount, 67 percent funds public safety, like police, fire, building and safety inspections and ordinance enforcement.

Here is a breakdown of what Dearborn home and commercial property owners fund through the summer property taxes:

In Nov. 2011, Dearborn voters approved a five-year supplemental operating millage (3.5 mills), which voters renewed in Aug. 2016. Those 3.5 mills are included in the 18.5 mill operating budget. Voters also passed a 10-year library millage (1.8 mills). Residential and commercial property owners will continue paying for those bonds until June 2022.

Dearborn also takes a portion of tax payments to pick up waste throughout the city. The rate has decreased to about 1.9 mills from last year’s 2.7 mills. The city was able to lower the cost of trash collection this year, reflected in a decreased millage, according to Deputy City Treasurer Ginger Soles.

All in all, the city collects a total of about 22.2 mills for city operations, a rate similar to a few years ago, with the exception of the highest hike of 22.4 mills last year.

Most of the taxes collected for city operation funds and city’s public safety, Soles added.

Most of the collected taxes, about 35 cents of every tax dollar, goes to Dearborn Public Schools (18 mills), Henry Ford College (4 mills) and the Michigan Department of Education (6 mills).

A person living in his or her own home is exempt from paying the schools’ operating 18 mills and is only responsible for a school supplement of 6.2 mills.

The school tax rate also includes two ongoing debt bonds that Dearborn voters passed, one in March 2002 (3.6 mills) and another in Nov. 2013 (1.2 mills), to upgrade facilities and classroom technology.

The city collects the taxes and gives them directly to the district.

All of Wayne County residential and commercial property owners, including Dearborn’s, also pay less than 1 mill for the county’s Regional Educational Service Agency (RESA), but are still paying for three special education debt bonds that voters passed in Aug. 1974, Nov. 1988 and Aug. 2002.

Most of the city’s revenue from property taxes are levied on the summer tax bill. The winter tax bill includes millages for the following services:

The city collects these funds and pays them directly to the county.

In Aug. 2004, voters approved a bond to cover the debt of installing a federally mandated Combined Sewer Overflow system (CSO) that would effectively move treated waste water into the Rouge River.

Dearbornites are responsible for 6.3 mills to fund the project. It is expected to cost up to $314 million and will be paid over a period of 30 years, with a fluctuating millage rate that will average 3.27 mills.

Laundroche said voters chose to pay for it through their tax bills, rather than their water and sewer bills.

“There was no way of getting around [the fact] that it needed to be paid for somehow,” she said. “Fortunately, there are benefits that come with their investment: New roads, water mains and sewers, which will help keep the city’s infrastructure updated for decades to come.”

More to pay for

The city’s Brownfield Redevelopment Authority will need $7.6 million to construct a parking deck and $10.7 million for a new streetscape and utilities at Wagner Place, a three-block site in west Dearborn where Ford Motor Company invested $60 million to develop new office and retail space.

These funds wil come from $3.14 million approved by state officials last December. Those local tax capture mills of 38.8 and school tax capture of 24 mills will begin in 2019 and are estimated to continue for 30 years.

The city is also responsible for financially supporting retired employees who are still receiving entitled benefits, for a total of $227 million.

In comparison to other communities in Wayne County for the 2016 tax year, Dearborn’s operating millage of 15 mills ranked 17th out of the 34 city governments, Soles said.

Dearborn residential and commercial property owners might be subject to paying for a seemingly mounting number of millages in the city and county, but the administration sees itself as a “good shepherd” of tax dollars, Laundroche said.

Aside from the city’s calculated operating rate set by the City Council, taxpayers subsidize projects to update an aging infrastructure and workforce, as well as higher quality education services, among others within their entire county. The millages cover long-term debts, whose rates are set by those entities asking for the funds.

“Newer communities don’t have the problem yet,” Laundroche added.