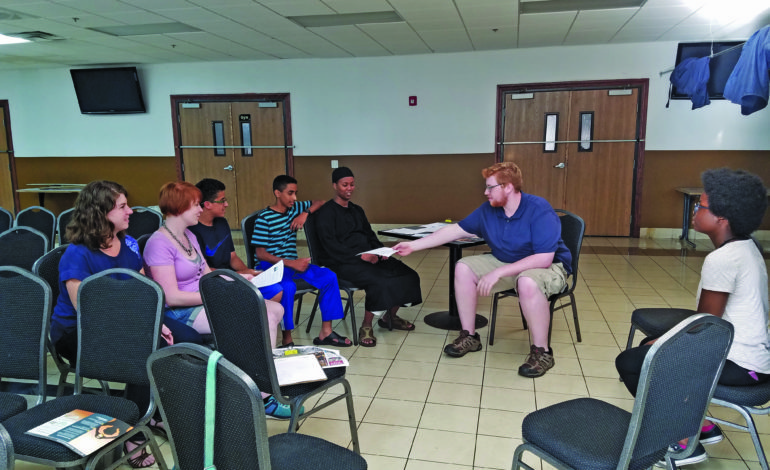 On Monday, there was a meeting about Dearborn air quality hosted by the Michigan League of Conservation Voters at the Dearborn Community Center.

The meeting was advertised as a space for citizens to express their concerns regarding air quality in their neighborhood and to learn about threats to the environment.

The MLCV concern itself with issues surrounding the Great Lakes, safe drinking water, clean air, parks and public land. It works to educate voters on how they can use direct action to put pressure on elected officials for environmental issues they’re passionate about. Members also give people who may not have access to resources to stay educated and to mobilize the tools to do so.

Unfortunately, only a few people attended the event, most of whom were MLCV volunteers.

Some of the topics discussed by the organizer, Henry Griffin, included the compromised health of locals by local industry, air quality violations by AK Steel and MLCV’s efforts to start bringing awareness to air quality issues to Dearborn.

Griffin’s team also handed out pamphlets that detailed how well or how poorly elected officials were rated when it came to listening to citizen interests on legislation on the environment and conservation.

“MLCV works to hold our elected officials accountable,” he said.

MLCV has become familiar with Dearborn-based AK Steel due to that company’s continuous air quality violations since it purchased the property from Russian-owned Severstal in 2014.

On March 24, The AANews reported on concerns about AK Steel’s impact on the environment and referenced a letter issued by former Detroit Health Director Abdul El Sayed to the State House regarding how AK Steel was in violation of 17 environmental regulations.

Sayed also stated that the environmental threats have been contributing factors in making Detroit an “epicenter of asthma” by the Michigan Department of Health and Human Services (DHHS).

A 2011 study by Dr. Mary Dereski, then director of the Wayne State University Family Medicine and Public Health Department, stated that “the rate of asthma hospitalization in Dearborn is more than double the average in the overall state.”

MLCV said that in Wayne County, more than 95 percent of regulated air sources had been legally compliant in 2015; however, the Michigan Department of Environmental Quality stated that in 2016 the quality of air in Dearborn was deemed unhealthy because of “small particulate matter in the air.” This data was collected by monitors placed at Salinas Elementary School near AK Steel.

“This area [Dearborn] has some of the worst air quality in the state,” Griffin said. “We want to start working with others in the community. We want to have a meeting like this every month, and by the next meeting hopefully there will be 20-40 people.” Charlotte Jameson has been the government affairs director at the MLCV for three years.

“This area has long struggled with air quality,” said Charlotte Jameson, the government affairs director for MLCV. Jameson, who has held this position for three years, handles all legislative and administrative advocacy and engagement.

Jameson said the Southend of Dearborn, as well as southwest Detroit, have been greatly affected over the years by the industries in the area.

“The bigger issue is, in Michigan, the way we do permitting for big industrial facilities for air quality,” Jameson said. “We look at one facility in a vacuum. We say you’re going to emit this particular toxin, say sulfur dioxide, and run it through some health screen models and say its okay.”

Jameson said that what isn’t taken into consideration is the cumulative health impact of all the facilities in the area.

“Its not to say that we want to see these places shut down, but that we can be doing a much better job, she said. Additionally, she said that some common sense, improved pollution control equipment and the consideration of all the pollutants caused by multiple facilities in Dearborn will have an impact on the air quality.

Jameson said that although AK Steel and other industries in the area, such as Ford and DTE, have made improvements to their facilities, the need for changes to permit issuances will bring about a greater impact on Dearborn.

Lisa Jester, public relations manager for AK Steel, said much of the facility’s problems were inherited from Severstal. She said that in its three years of ownership, AK Steel has greatly improved its environmental performance at the Dearborn plant.

Jester also said that while Severstal had 23,896 air permit violations in 2013, AK Steel had reduced its numbers to 35 in 2016; AK Steel officials said they believe this was the direct result of the implementation of the AK Steel Environmental Management System, which requires “personal accountability and detail work” from its team members.

In May, State Rep. Abdullah Hammoud (D-Dearborn) wrote a column for the Detroit News which stated that AK Steel had been issued another violation notice in February; the column detailed that the main technology for pollution control at AK Steel is machinery from 1964.

The next MLCV meeting will be on September 18 at 6:30 p.m. at the Dearborn Community Center, also known as Masjid Al-Salaam, located at 3900 Schaefer Road. The meeting is free and open to the public.