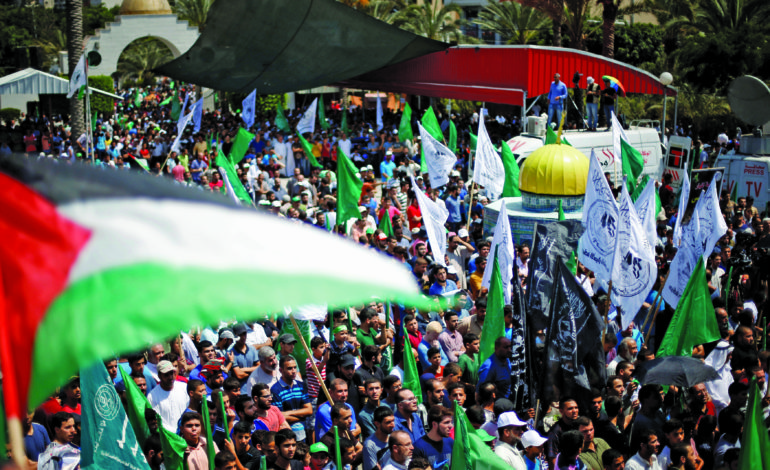 Palestinians take part in a protest against Israel's new security measures at the entrance to the al-Aqsa mosque compound in Jerusalem, July 25.

Neither Fatah nor Hamas have been of much relevance to the mass protests staged around the al-Aqsa Mosque compound in Jerusalem. Neither have American pressure, half-hearted European “concern about the situation” or cliché Arab declarations made one iota of difference. United Nations officials warned of the grim scenarios of escalation, but their statements were mere words.

The spontaneous mass movement in Jerusalem, which eventually defeated Israeli plans to change the status of al-Aqsa, was purely a people’s movement. Despite the hefty price of several dead and hundreds wounded, it challenged both the Israeli government and the quisling Palestinian leadership.

Israel shut down the al-Aqsa compound on July 14, following a shootout between three armed Palestinians and Israeli occupation officers. The compound was reopened a few days later, but Palestinian worshipers refused to enter, as massive security installation, gates, cameras and metal detectors were installed.

The people of Jerusalem immediately understood the implication of the Israeli action. In the name of added security measures, the Israeli government was exploiting the situation to change the status of Al-Aqsa as part of its efforts to further isolate Palestinians and Judaize the illegally occupied city.

The Israeli army occupied Palestinian East Jerusalem in 1967, annexing it in 1981 in defiance of international law and despite strong U.N. objection.

For 50 years, Jerusalem has endured daily battles. The Israelis fought to expand their influence in the city, increase the number of illegal Jewish settlers and cut off Jerusalem from the rest of the Palestinian Territories; while Palestinians— Muslims and Christians alike— fought back.

Al-Aqsa compound — also known as Haram Al-Sharif or the Noble Sanctuary — is the most symbolic element in the fight. It is a microcosm of the fate of the occupied city, in fact the fate of the entire Palestinian land.

The compound has been administered by Islamic Waqf, through an Israeli-Jordanian understanding. Many Israeli politicians in the Likud Party and the Netanyahu-led rightwing government coalition have tried to change this.

Palestinians understand that the fate of their mosque and the future of their city are tightly linked. For them, if al-Aqsa is lost, then Jerusalem is truly conquered.

This fight between Palestinian worshipers and the Israeli army happens every single day, usually escalating on Friday. It is on this holy day for Muslims that tens of thousands of faithful flock to al-Aqsa to pray, oftentimes to be met by new military gates and army regulations. Young Palestinians, in particular, have been blocked from reaching Al-Aqsa— also in the name of security.

But the struggle for Jerusalem can rarely be expressed in numbers, death tolls and televised reports. It is the ordinary Palestinians’ constant fight for space, for identity and to preserve the sanctity of their holy land.

In the last two years, the fight escalated further as Israel began expanding its illegal settlements in East Jerusalem and rightwing parties issued a series of laws targeting Palestinians in the city. One such law is the call for prayer law, aimed at preventing mosques from making the call for prayers at dawn, as has been the practice for a millennium.

Palestinian youth, many born after the failed Oslo Accords, are fed up as the Israeli military controls every aspect of their lives and its corrupt leadership grows more irrelevant and self-serving.

This frustration has been expressed in numerous ways: In non-violent resistance, in new political ideas, in art and music, on social media, but also through individual acts of violent resistance.

Since the most recent Al-Quds Intifada — Jerusalem uprising — started in October 2015, “Some 285 Palestinians have died in alleged attacks, protests and (Israeli) army raids,” reported Farah Najjar and Zena Tahhan. About 47 Israelis were killed in that same period.

But the Intifada was somehow contained and managed. Certainly, human rights groups protested many of the army killings of Palestinians as unnecessary or unprovoked, but little has changed on the ground. The Palestinian Authority has continued to operate almost entirely independent from the violent reality faced by its people on a daily basis.

The shootout of July 14 could have registered as yet another of the many violent episodes that have been reported in Jerusalem in recent months. Following such events, the Israeli official discourse ignores the military occupation entirely and focuses instead on Israel’s security problem caused by “Palestinian terror.” Politicians then, swoop in with new laws, proposals and radical ideas to exploit a tragic situation and remold the status quo.

Considering the numerous odds faced by Palestinians, every rational political analysis would have rightly concluded that Palestinians were losing this battle as well. With the United States fully backing Israeli measures and the international community growing distant and disinterested, the people of Jerusalem could not stand a chance.

But such understanding of conflict, however logical, often proves terribly wrong, since it casually overlooks the people.

In this latest confrontation, Palestinians of Jerusalem won, presenting an impressive model of mobilization and popular solidarity for all Palestinians. The Israeli army removed the barricades and the metal detectors, pushing Israel to the brink of a political crisis involving angry politicians, the army and internal intelligence, the Shin Bet.

The people’s victory was a massive embarrassment for Mahmoud Abbas, the president of the Palestinian Authority in Ramallah. He tried to “piggyback off the protests” but failed, reported the Atlantic.

Other factions, too, moved quickly to mobilize on the people’s victory, but their efforts have appeared staged and insincere.

“Today is a joyful day, full of celebration and sorrow at the same time — sorrow for the people who lost their lives and were injured,” a protester told journalists, as thousands stormed the gates of Jerusalem armed with their prayer rugs, flags and voices hoarse from chanting for nearly two weeks.

“This is very much a grassroots movement — this isn’t led by Hamas or Fatah, the traditional political leaders of the Palestinians,” journalist Imran Khan reported from outside the compound.

This grassroots movement was made of thousands of women, men and children. They included Zeina Amro, who cooked daily for those who held steadfast outside the compound, was shot by a rubber bullet in the head and yet returned to urge the men to stand their ground the following day.

It also includes the child Yousef Sakafi, whose chores included splashing water over people as they sat for endless hours under the unforgiving sun, refusing to move.

It also includes many Palestinian Christians, who came to pray with their Muslim brethren.

But the crowds are made up of individuals, the likes of Zeina, Yousef and many more— all driven by their insistence to face injustice with their bare chests in an inspiring display of human tenacity.

Of course, more violence will follow, as the Israeli occupation is enriched and relentless, but ordinary Palestinians will not quit the fight. They have held resolute for nearly 70 years.

Rational political analysis cannot possibly fathom how a nation undergoing numerous odds can still mobilize against an army and win.

But the power of the people often exceeds what is seemingly rational. Almost leaderless, Palestinians remain a strong nation, united by an identity that is predicated on the pillars of human rights, resistance and steadfastness. γ