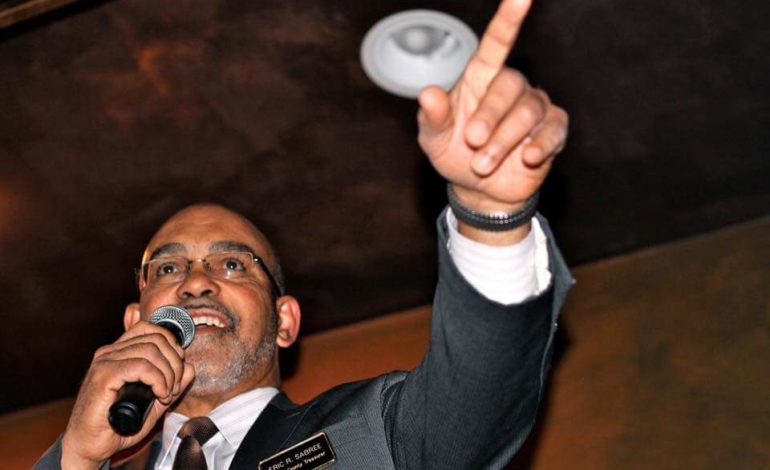 DETROIT — In the 1980s, Eric Sabree sat in Muhammad Ali’s hotel room and watched old boxing tapes of Ali’s famous matches while laughing and eating ice cream as Ali relived each fight with Sabree and his friend.

“We had a ball,” Sabree said, laughing at the memory. “We had a great time, and then he [Ali] was tired and we left the room.”

Sabree, the Wayne County treasurer, has had some memorable moments in his lifetime. He considers that day with Ali as one in which he received some sage wisdom.

Sabree’s father, Bill Humphries, was a TV sportscaster. This connection is what gave him the chance to meet the famous boxer.

While in the 11th grade, Sabree read “The autobiography of Malcolm X.” Before that he’d had little to no exposure to Islam, despite living in New York City.

“My dad was a Boy Scout executive,” Sabree said. “He knew Thurgood Marshall, Adam Clayton Powell; they were all recruited [by my dad] to be Boy Scout volunteers. Charlie Rangel, Percy Sutton, the attorney.”

Sabree said that despite being aware of other well-known figures, he had not been aware of who Malcolm X really was before picking up his book.

Sabree, 63, said he started investigating Islam in college and decided that the message in the Quran was practical.

Sabree grew up Catholic and attended Catholic Central High School in Detroit. He said his upbringing in Catholicism was positive and that he has always believed it is a good way of life; however, he personally felt a greater connection to God when he converted to Islam.

When Sabree converted, he told his former principal and his wrestling coach. Neither had anything negative to say about his conversion.

“Helping people, doing good,” Sabree said, “It is universally accepted no matter what you are. I’m still the same type of person before I was Muslim. My personality didn’t change.”

In 1983, Sabree and his wife, Badriyyah, made the Islamic pilgrimage— hajj— which Sabree feels, to this day, is the best experience of his life.

“It’s the number one experience,” he said, “And everything else is a distant second.”

Sabree was able to go back to Saudi Arabia some years later for the umra ritual just after Ramadan ended, and the two holy cities of Mecca and Medina were less crowded than when Sabree went for hajj.

He has fond memories of one particular moment.

“I got to go inside of the prophet’s mosque,” Sabree said.

He’s written a book, yet to be published, about his experiences at hajj. He hopes to go again with his wife, his children and his granddaughter, so that he can include his reflections about the second trip when he does publish his book.

Sabree, who received his bachelor’s degree in building construction from Michigan State University and his law degree from Detroit College of Law, is the first African American and the first Muslim to be Wayne County Treasurer. He’s been in the job since April 2016. Prior to that, he’d been chief deputy treasurer since 2011 and chief assistant corporation counsel for Wayne County from 2005 to 2011.

He was then elected in his own right in the 2016 elections. His appointment and subsequent election was Sabree’s first run for political office.

He said that he received a lot of support from everyone, especially Muslims.

“I am very thankful for the overwhelming support I received from the Muslim community during my election last year,” he said.

Sabree won by more than 10,000 votes and earned 57 percent of the votes in Dearborn.

As county treasurer, Sabree said that he and his team are in charge of assuming and investing in county funds. He said that money is accounted for by his office, which invests much of this money in order to help Detroit citizens.

One of his first acts was to institute foreclosure prevention efforts.

“We initiated kiosks,” he said. “People can pay at Rite Aid drug stores, and other places around the county, making it convenient. We started out last August with 270 transactions for the month. Since January 1 through June, we have had over $48,000 just in kiosks. We have collected over $16 million.”

By having more accessible payment methods, residents were able to keep their debts down.

Sabree said June was an exciting time for the county as foreclosures were down 72 percent. He instituted more outreach efforts, such as advertising on radio, in newspapers, on television, through email and texts— and even going door-to-door— to further educate and reach more citizens.

Sabree said the education process helped immensely as almost 2,000 home owner-occupants were about to lose their property in June for owing less than $1,000 in delinquent taxes. However, through outreach efforts by the treasurer’s office, the number was down to 141 by June 23; and by June 27 that number went down to 106.

“Now we have no one,” Sabree said about residents owing less than $1,000 on homes they live in and own.

“You can’t judge,” he said. “People get behind. Some people have medical issues. Some people couldn’t pay because they had huge prescriptions bills; some have to choose between their medication and their homes.”

Sabree said the services he’s instituted and the help he’s put in place are for all county residents.

“We want to help [any] people when they need it,” he said.

Sabree does not boast about his faith or show that he is more important because of it, but he does want young Muslims to know that there are opportunities in the world for them.

He also said that anything that is worth something can hold its own.

Catholic Central’s motto of “goodness, discipline and knowledge” has stuck with Sabree over the years.

“The knowledge that we get, wherever it comes from, it can help improve us as a person,” he said.

Sabree is centered in his experiences, his faith and his work ethic. He strives for excellence and he is hopeful for the county.