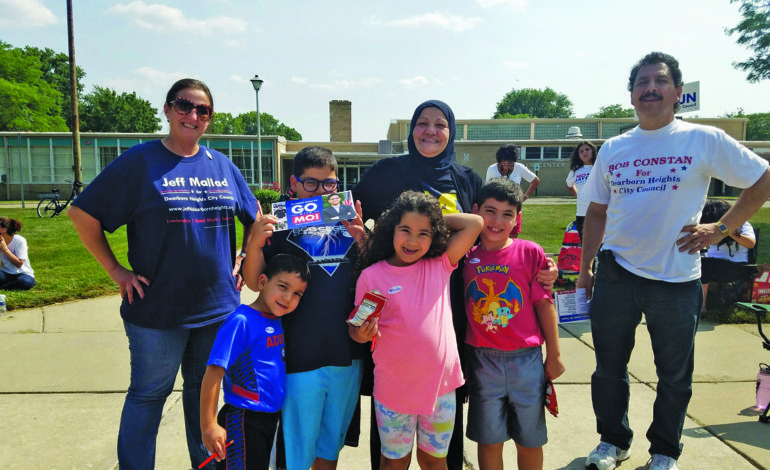 There was a lot of activity at Berwyn Senior Center. Councilman Bob Constan ran for reelection; he is standing on the right next to a family that came from voting, and a campaign representative for Jeff Mallad. Photo by Afaf Humayun

DEARBORN HEIGHTS — On August 8, Dearborn Heights held its municipal primary elections for mayor, City Council, City Clerk and treasurer. Mayor Dan Paletko won first place in the mayoral race, followed by Councilwoman Lisa Hicks-Clayton who came in second. The two candidates will face off in the general election on November 7. Eduardo Garcia, who came in third place, is out of the race and won’t be on the November ballot. Of the 38,877 total registered voters, 6,477 (16.66 percent) participated in the primary elections.

Dearborn Heights has 27 precincts.
Precinct 20, located at St. John the Baptist Church,
had the lowest turnout with only a 8.62 percent, and precinct 18, located at Kinloch School, had the
highest turnout with 23.87 percent.
The average turnout is 16.66 percent.

City Council: Three Arab Americans in the race for November

Councilman Thomas Berry, who’d decided not to run for re election after his name had already appeared on the ballot, came in eighth place at 1,438 votes. Bill Bazzi stopped for a photograph before he headed back to engage voters at local precincts. Photo by Afaf Humayun

Paletko told The AANews that he’s pleased with the mayoral race results.

“Anytime you win you have to be happy with the results,” he said. “We haven’t sat down and worked out a strategy yet, we are just pleased with the results from yesterday. We are going to continue to work hard and get our message, we believe it is resonating very well with the voters.”

Paletko also said that he wished there were more voters at the polls.

“I think the turnout could have been larger,” Paletko said. “I hope it’s larger in November. This is an opportunity for people to pick their representatives, and hopefully get more involved in the process.”

During Paletko’s campaign he told The AANews that the Arab Americans are “the heart of the community.” Paletko said believes he is the most qualified for the mayoral seat because of his education, experiences and skills in leadership.

Hicks-Clayton responded to the results by saying that majority of residents are dissatisfied with the way Paletko has run the city and handled their neighborhoods.

“I’m grateful to everyone who came out in support of a better future for Dearborn Heights,” she said. “And a more responsive, receptive City Hall. I look forward to their support and help this fall. Over the next few months, I’ll be taking my message of responsible, compassionate and sensible governance to every corner of our city.” Hicks-Clayton also said she wants to make sure everyone shows up to vote in November.

“With their support, we will create a brighter future for all our families and local businesses,” she said.

During her campaign, Hicks-Clayton told The AANews that one thing she would do as mayor would be to review and update the five-year master plan to maximize the Economic Development Department to better utilize resources and improve the economy.

Despite low voter turnout, the City Council candidates could be found making the rounds at all the precincts.

Early in the day Baydoun was camped with his team at Henry Ford Elementary School, where he engaged voters and his representatives held signs and passed out snack crackers.

Baydoun said he received great feedback from voters, and that the turnout was nice though he felt it could have been better.

The early afternoon was the first litmus test for the low turnout. Only 34 voters had come to precinct one, which had 1,556 registered voters, and there were just under 60 at precinct two where 1,391 voters are registered. On the north side, at the St. Sabina Catholic Church Activities Building, which houses precincts five and six, approximately 110 voters had stopped to vote by the afternoon. Between the two precincts there are a total of 2,643 registered voters.

While on his on his break from visiting polling centers, Bazzi told The AANews he felt that voter turnout was low. However, he said his visits to polling centers had been pretty good, saying he’d been to two-thirds at that point.

Slightly southeast from St. Sabina is Berwyn Senior Center, which houses four precincts. An additional two precincts than other polling locations gave a false impression of high voter turnout to passersby due to people entering the building for precincts nine, 10, 16 and 17.

Precinct 17, where 1,197 people are registered, had a total of 224 votes by the end of Tuesday. Earlier in the day, a poll worker said midday tallying is never accurate since she believed many voters in precinct 17 vote absentee. Between all four precincts at the senior center, 1,018 votes were cast out of 4,824 registered voters, including absentee votes.

Bill Hoffman, a poll worker who has worked for three years at precinct 10, said he had received positive responses from voters.

Constan was stationed outside the senior center, along with representatives for Mallad, Bazzi and Baydoun.

“Turnout for the primary has been pretty good,” he said. He also said he thanked everyone for voting.

Councilman Ray Muscat was present at the Canfield Community Center, where he engaged voters in the parking lot in support of multiple candidates. Muscat said most of the people who showed up to vote already knew who they’d be voting for and that he was glad they’d done their homework because that’s a positive thing for the community.

Mallad, a first-time candidate for City Council, was also present at the community center.

“I look forward to seeing the results,” he said. “Maybe get elected and help improve things in the city which I think I can do.”

While voters were scarce on Tuesday, all the candidates made it clear that they want to see more people at the polls in November.