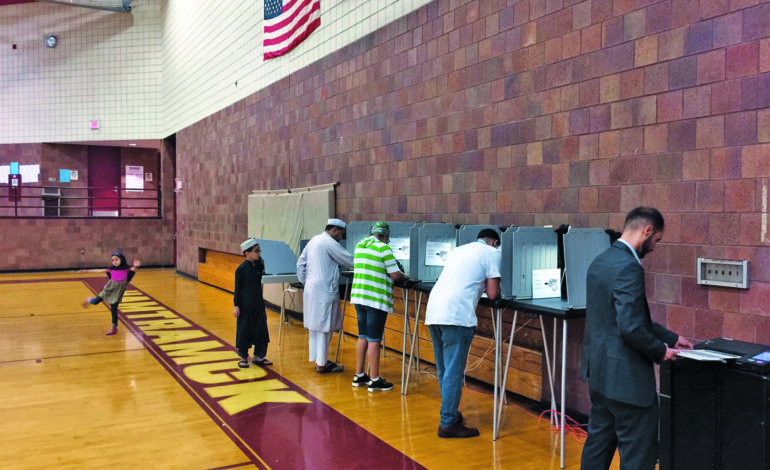 Hamtramck residents voting at precinct 4 - Photo by The AANews

HAMTRAMCK — Even though 33 percent of Hamtramck’s residents are Yemeni, only one Yemeni candidate— Mohammad Al-Somiri— made it to the general elections this year.

Yemeni American Councilman Saad Almasmari said the community was hoping educator Akil Al-Halemi would make it through the City Council primary race because of his high qualifications, but unfortunately he did not.

“He’s educated and a young blood,” Almasmari said, adding that they thought he had it in the bag only three minutes before the absentee votes were revealed. “We were surprised by Mohammad Al-Somiri getting 375 absentee votes. That’s what flipped the results in the last three minutes.”

“I think the Yemeni community should work hard on having more voters to come out and vote to [ensure representation] in the city government,” Almasmari said.

The top six vote getters will advance to the general election on November 7 and compete for the three available seats.

In the mayoral race, incumbent Mayor Karen Majewski, who received 43 percent of the votes (1,258), will face off against Councilman Mohammed Hassan, who received 27 percent (792).

Overall the voter turnout seemed slow throughout the day, but still at 26 percent, which is considered high for the primary compared with previous similar elections.

“It’s not the presidential election,” a poll worker said at around 8:40 a.m. “I don’t think anyone really knows its Election Day.”

Hamtramck has a large immigrant population and inside each building housing a voting precinct, Arabic and Bengali signs directed voters to the precincts or assured them that the poll workers know either language.

Early in the morning, 11 people had voted at precinct 1, which is located in the housing administration building. By noon, only 31 votes had been cast. By the end of the day, a total of 616 votes were cast.

Councilwoman Andrea Karpinski, who is running for reelection, campaigned with a group of volunteers outside the building, starting at 7:45 a.m.

Her father, a former councilman in 1997 and 1998, said back then there were 37 precincts. Now it’s easier for candidates to interact with voters because there are only seven precincts.

A poll worker at a precinct 4 table said they would most likely have a 25 to 50 percent increase in voter turnout by the end of the day. They ended up with a total of 1192 votes.

Both are located at the Senior Plaza, where City Council candidate Fadel Al-Marsoumi was outside interacting with voters. He stayed out at the precincts all day.

Workers inside the plaza said it was much busier during the presidential election.