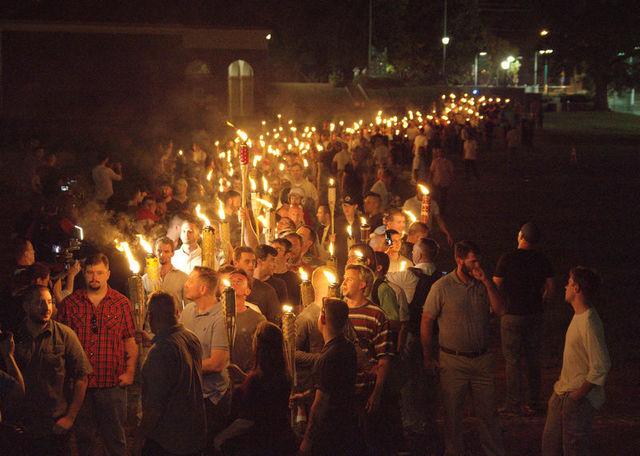 White Supremacists carry torches on the grounds of the University of Virginia, on the eve of a planned Unite The Right rally- Courtesy of Reuters

CHARLOTTESVILLE, Va.  – White supremacists clashed with counter-demonstrators in Charlottesville, Virginia, on Saturday, prompting the governor to declare an emergency and stop a rally to protest the planned removal of a Confederate general from a public park.

Fighting broke out in the city’s downtown before noon when hundreds of people, some wearing white nationalist symbols and carrying Confederate battle flags, were confronted by a nearly equal number of counter-protesters. The clashes began the previous evening, resulting in at least one arrest.

Soon after the melee erupted, Virginia Governor Terry McAuliffe declared a state of emergency in the city, home of the University of Virginia’s flagship campus. The gathering was declared an “unlawful assembly,” allowing police to disperse the protesters.

Many of the combatants on both sides wore helmets and held shields, and some in the crowd brandished wooden poles. Militia members in the city openly carried rifles, although no gunfire was reported.

“You will not erase us,” chanted a crowd of white nationalists, while counter-protesters carried placards that read: “Nazi go home” and “Smash white supremacy.”

President Trump, on a working vacation at his New Jersey golf club, condemned the violence and urged Americans to “come together as one.”

“We ALL must be united & condemn all that hate stands for,” Trump said in a message on Twitter.

After the crowd was dispersed, dozens of law enforcement officers clad in riot gear were seen patrolling the streets, with small clusters of protesters gathered in pockets in the surrounding streets.

Two people were injured in clashes on Saturday, Virginia State Police said on Twitter. Local law enforcement agencies could not be reached immediately for comment.

The clash unfolded ahead of the planned start of a “Unite the Right” rally that was expected to draw thousands of people who are angry at the planned removal of a statue of Confederate General Robert E. Lee from a public park.