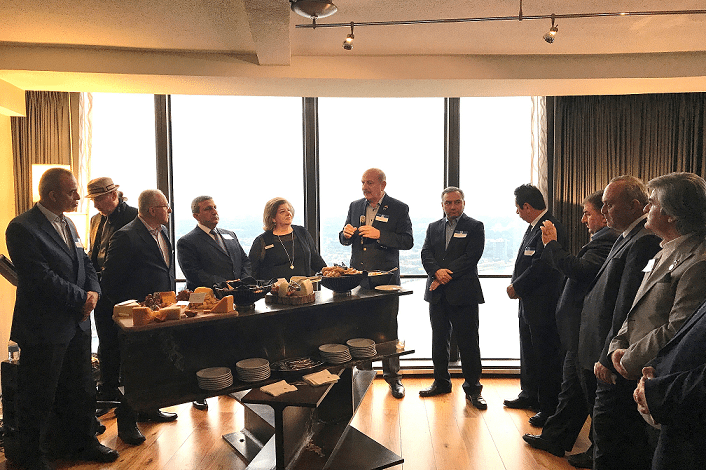 A Jordanian trade delegation and government officials at the Marriott Renaissance in Detroit.

DETROIT — On Thursday, Aug. 3, the Honorary Consulate of Jordan in Michigan hosted a reception and forum welcoming a Jordanian trade delegation to Detroit.

The key objective of the mission was to promote the growth of trade and business diversification of the Jordanian exports to the U.S. in several manufacturing sectors that are ready and eligible to export into the U.S., in line with the Jordan-U.S. Free Trade Agreement (JUSFTA).

A delegation of 36 Jordanian manufacturers from key national sectors, including food and chemicals, as well as select industries like Dead Sea products, plastics and packaging, joined the trade mission to gain a better understanding of the U.S. The delegates also sought to expand their networks of agents and distributors and explore concrete business opportunities with counterparts from the U.S. Habib Fakhouri, the Jordanian consul in Michigan, held a private networking reception at the Marriott Renaissance in Detroit for the Jordanian Trade Delegation.

Approximately 100 people attended the networking reception, including leading business figures from Southeast Michigan and representatives from the state. The reception ended with closing remarks from Dr. Haifa Fakhouri, president and CEO of the Arab American and Chaldean Council (ACC).

“Your participation assures an enduring commitment to build sustainable economic ties between the United States and the Jordanian business community,” Fakhouri said.

On Friday, Aug. 4, a trade and investment forum focused on Jordan’s socio-economic, institutional and legislative business features, which position the kingdom as a hub for global businesses and a gateway to the region.

The group said it shed light on Jordan’s open economy. As part of the forum, guests had an opportunity to preview and sample products from Jordan as well as network with delegates.

Lana Al Nimri, an organizer of the delegation’s U.S. tour, said it took more than six organizations in Amman and the U.S. to make it happen.

She said the delegation is part of an intuitive called the Tijara Coalition, a joint effort of various business associations, chambers and governments that work to tackle the challenges of exporting into the U.S. and attracting U.S. investments into Jordan.

Jordan is the first country in the Arab World and third globally to have a free trade agreement with the U.S. Al Nimri said the delegation aims to take advantage of and foster that arrangement.

She also said Jordan exports $1.1 billion to the U.S., but most of it is focused on garments and textiles.

But they want to try to diversify, as they feel a big market exists for niche Jordanian products such as food, chemicals and cosmetic products, she added.

“A targeted approach is the only way to go forward,” Al Nimri said. “We have to change the way to do business and raise the bar. We speak the language of U.S. businesses to provide them products that meet their needs and will allow us to enhance our exports and grow.”

Jehad Atiyat, CEO of Munir Sukhtian Group, a Jordanian-based manufacturer of pharmaceuticals, cosmetics and personal care products, said his company joined the delegation, “to discover the big opportunity of having our products distributed in the United States.”

He said the company is already well-known in the 35 countries to which it export products, and it aims to do the same in the U.S. if it can find the right distributor.

“We find a lot of hospitality and assistance,” Atiyat said of the hosts. “And they are all ready to help us complete our mission.”
Atiyat added that entering into the U.S. market poses it own challenges, including that products are expected to be unique. That pushes them to improve their production standards.

He said the delegation has visited other states, but that Detroit is their target market because of the economic opportunities from a large Arab American population.

Why invest in Jordan?

Atiyat said Jordan is also a prime country for foreign investment and boasted high quality manufacturing and a skilled and ready work force.