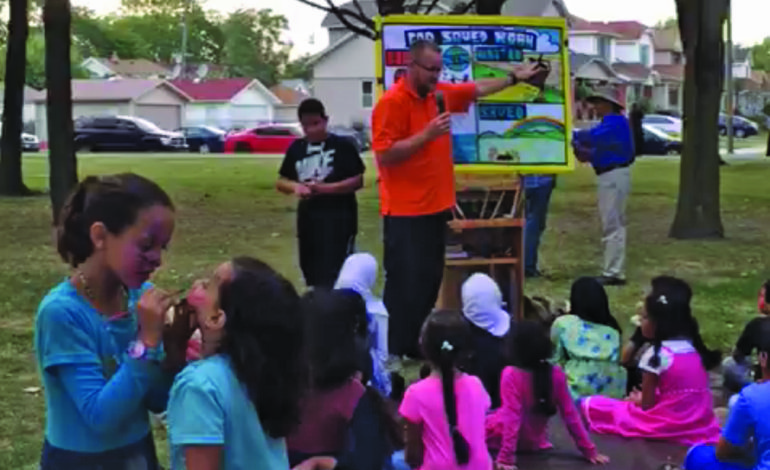 DEARBORN — On August 7 and 8, Christian missionaries from California visited Hemlock Park in East Dearborn. In the span of two days, workers face-painted with children, handed out prizes and shared their faith. A number of the parents who were in the park allowed their children to venture into the event unaware of the religious preaching. Some of the parents didn’t know what their kids were engaged in due to the language barrier.

“According to our corporation counsel, it appears to be legal to engage in the noted activities under the First Amendment in the park, ” Police Chief Ron Haddad told The AANews. On video obtained by The AANews, which was filmed by Heather Faye and Christy Lynn on Aug. 8, a preacher appears to be proselytizing Christianity to the Dearborn youths. The missionary workers came from all different places, but most were from California, according to one of the missionary workers, Jessica Cserhalmi.

The worrisome thing, Lynn told the Detroit Free Press, is that the missionaries weren’t really approaching the parents.

“They were approaching the children,” she said.

“We love the people, that’s our desire to go there,” Cserhalmi told The AANews. “I know there are a lot of Muslim people. They need to know the truth, and that’s the reason. They’re people who love God, but don’t know the true God. We are not there to convert because God is the one who will open their eyes.”

When asked if she thought they had enlightened anyone she said, “No, no I really don’t know. We were not there to convert but just to share God’s love. It’s only between them and God.”

She also said they went to the park because God told them his word.

“Go to other nations,” she said. “And that’s exactly why we share. We love to converse, not convert. Only God can do that.”

Cserhalmi also said that anyone who converts from Christianity to another religion was never Christian to begin with.

“They never really knew the truth,” she said.

Cserhalmi said she and about six other missionary workers sat with people, face painted with the children, and shared love with the children. She also said they didn’t visit any other park in the city during their two day stay.

When asked which church she was affiliated with, Cserhalmi said she’d prefer not to respond.

On Aug. 16, the “Cserhalmi Stephen Rosalie” Facebook profile listed “Calvary Chapel Chino Valley” as his employer. When The AANews called the church to speak to the person in charge, a receptionist transferred the call to Stephen Cserhalmi’s voicemail. Prior to a second call by The AANews on Aug. 17, reiterating a request for an interview about the church’s possible missionary work in Dearborn, the “Cserhalmi Stephen Rosalie” Facebook page had removed the church affiliation from the profile and changed the employment status to “homemaker.”

Stephen Cserhalmi did not respond to repeated interview requests.

Dearborn resident Labaneya Maisoun wasn’t present for the missionary activities on either Aug. 7 or 8, but did witness the conclusion of a similar event at Hemlock Park toward the end of July, during an Eid al-Fitr celebration. She said she didn’t know if the same missionary workers were in Dearborn on both occasions.

Maisoun said a non-profit Islamic organization was holding the Eid al-Fitr event and that the missionary workers chose that specific day to come to Dearborn. She also said she witnessed a heated exchange between one missionary worker and a parent.

“Some of our sisters wanted to diffuse the problems,” she said. “We don’t want any problems with our Christian brethren. We all have one faith under one God.”

Maisoun said the missionary workers enticed the youth with a henna party, candy and other treats, then preached to the children about Jesus.

“The kids don’t mind, they love Jesus,” she said, adding that the missionary workers are misusing the lack of proficiency in English by the parents, many of whom are newcomers.

The video from August 8 sparked a debate in the community on The Arab American News Facebook page.

“[Hemlock] is a public park and so parents need to be aware of what is happening around them, watch their kids and be present for such moments as this,” said Stephen Coats, who wrote that he has lived in Dearborn since 2001.

“Don’t be the victim, get smart, keep to your own and don’t wait around for Allah to make a decision,” Ayad Succar wrote. “Make it yourself, know what the person with a loudspeaker is saying to your child, know your environment.”

On August 7, the same day missionaries visited Hemlock Park, a video was posted on the Calvary Chapel Chino Valley Facebook page, featuring Stephen Cserhalmi and a woman, inviting members to come to a “456 Apologetics Forum.”

The video invited parents of fourth, fifth and sixth graders to come and, according to Cserhalmi, “equip your children to understand and defend their faith and the Bible.”