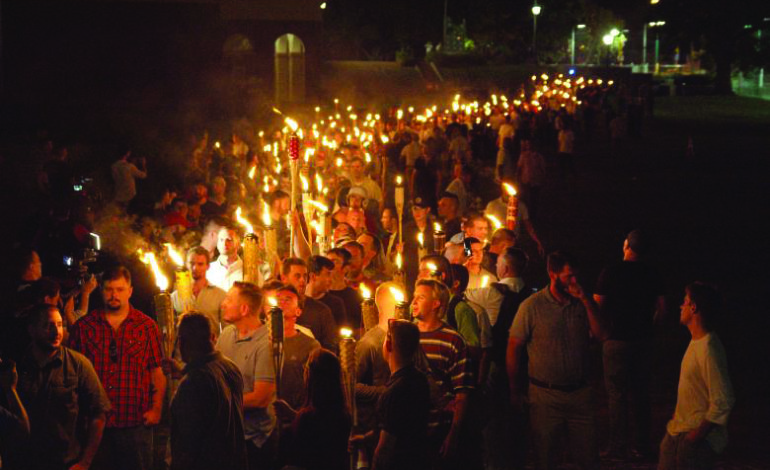 CHARLOTTESVILLE/DEARBORN — Dearborn residents assembled in healing and solidarity with Charlottesville, Virginia on August 13 and 16, against White supremacy — reemphasizing the city’s cohesive nature in visible diversity that trumps hate.

The first peaceful vigil, in which at least 100 demonstrators gathered on Sunday, was promptly organized in only 12 hours by a few residents on social media. As for the Wednesday demonstration of “healing and uplifting”, University of Michigan-Dearborn student activists took charge, garnering nearly 200 attendees.

Protesters silently held candles and solidarity posters with statements such as “White Supremacy is Terrorism”, “Remember Heather Heyer”, “No KKK, No Fascist U.S.A”, “Love Your Brothers And Sisters” and more that elevated their voices symbolically in their stance against hatred.

An act of terrorism in Charlottesville A car crashes into counter-protesters in Charlottesville – Photo by Reuters

The horrific clashes that took place August 12 had started with a White supremacist “Unite the Right” rally against the planned removal of Confederate General Robert E. Lee’s statue from a public park in Virginia. The fights broke out in downtown Charlottesville in the morning, when hundreds wearing White nationalist symbols and carrying lit Tiki torches, firearms, shields and Confederate flags were met by counter-protesters. According to Reuters, the protest had also resulted in one arrest the evening prior.

The state’s democratic governor, Terry McAuliffe, held alt-right protesters responsible for instigating these clashes and declared a state of emergency, while the city confirmed the unlawfulness of the “Unite the Right” rally.

“I have a message to all the White supremacists and the Nazis who came into Charlottesville today,” McAuliffe said in a news conference. “Our message is plain and simple: Go home.”

The protest was then canceled before its scheduled start time, as clashes continued throughout the city. One of the White supremacists violently plowed a car into a group of counter-demonstrators, killing Heather Heyer, a 32-year-old legal assistant and civil rights activist, and injuring at least 19 others. An additional 14 people were allegedly injured in different incidents.

Also, two Virginia policemen died in a helicopter crash nearby as they monitored the situation.

Charlottesville Mayor Mike Signer called the vehicle attack a “terrorist attack with a car used as a weapon” in an interview with NBC’s “Meet the Press” on Sunday.

The attacker, James Alex Fields Jr. was charged with second-degree murder and other counts.

President Trump drew criticism when he said “many sides” were involved, asserting that counter-protesters should also be blamed instead of denouncing the White supremacist rally that led to murders and injuries.

“I think there is blame on both sides and I have no doubt about it,” Trump said, adding that there were “very fine people” in both rallies. Local resident Mary Kay Kubicek organized the Aug. 13 vigil at the Dearborn Veterans Park and War Memorial with the help of others, who were just as frustrated as she was.

Rep. Dingell was one of the attendees.

“We have to remember united we succeed and divided we fall,” she shouted.

“People need to use this moment to take time to get to know each other, to listen to each other, to understand that each of us has different experiences and come from different backgrounds,” Dingell added, after quoting Martin Luther King, Jr.

She also said the negative rhetoric needs to end.

“Let us be the leaders in setting a new tone of who we want to be in America and find ways [to] come together as communities,” she said. “And, remember that community is the stake of democracy and that a diverse community is what makes us so rich in this country.”

“White supremacy, racism, these are sins that keep us from being the kind of community and kind of nation that we need to be,” said Pastor Fran Hayes of Littlefield Presbyterian Church.

Mayor O’Reilly said there’s no place for violence in America.

“This is an example of what’s supposed to happen,” he said of the vigil. “We created along here a place that any time anyone has anything they have to say about our government, about anything, they can come in peace and voice their opinion… we have this right… we can have discourse, we can talk about issues, but we can’t hurt each other or kill each other.”

In this town and in this country, we stand for something, we stand for the preservation and the protection of
the rights of Americans.

Even though the Sunday demonstration seemed to lack youth and had more middle aged and elderly adults in attendance, which some goers felt “ambivalent” about, they still told The AANews that the turnout was great for only a 12-hour notice.

Nevertheless, young blood at the University of Michigan-Dearborn did not sleep on the matter, but only needed time to process the tragic events.

Student Government Vice President Sara Alqaragholy, 20, told The AANews that she became numb the day after the protests and deaths happened in Virginia.

“Either Monday night or Tuesday morning, I reached out to a bunch of friends of mine and student government leaders,” she said. “I told them that we need to do something on our campus… we can’t sit back and watch silently.”

Alqaragholy and her friends, Micho Assi, a former president of the Pre-Law Association, PRIDE Treasurer Jordan Yunker and incoming Freshman Nour Ali, organized the peaceful demonstration and created a Facebook event, inviting as many people as they knew. However, they didn’t expect the tremendous turnout they had.

We had a group of extremists, White nationalists who now feel emboldened because of a leadership we have in Washington D.C., who is unable to condemn by name… He failed us as a leader of a nation that’s supposed to respect all individuals.

“For anybody who doesn’t feel like they can contribute anything, they’re wrong,” Alqaragholy said. “They’re wrong because they have power… We are all very strong when we come together.” Rep. Dingell and John Dingell were among those in attendance at the Aug. 16 vigil, held on the U of M-Dearborn campus.

“Today, as I greet you, my friends, I greet you as my fellow immigrants…” John Dingell, 91, said, adding that he’s honored to be at the event and proud of elected officials, students and residents. “In this town and in this country, we stand for something; we stand for the preservation and the protection of the rights of Americans.”

Both Mayor O’Reilly and Pastor Hayes also spoke at the vigil.

Elahi condemned Trump’s statements at the rally, saying that this is a nation that needs to be led with respect and unity.

“This is our expectation,” he said. “We hope that somehow he found the facts and that he is ready to show the leadership that the family of Heather and other victims and those two officers [need]…They deserve respect and protection and [for] the president to be [the first] to listen to their call.”

Rep. Hammoud, who did not attend the first vigil due to being out of town, said he wished to be in Dearborn as he watched what was happening in Charlottesville. Students and residents stand in solidarity against White supremacy. – Photo by The AANews

“When I think of Dearborn, I think of how our mosques neighbor our churches,” he said. “I think of our schools, where our children grow up without thinking of one another as how we are different based on our religion, race, color and creed, but how we get along and grow up respecting each other.”

“We had a group of extremists, White nationalists who now feel emboldened because of a leadership we have in Washington D.C., who is unable to condemn by name,” he said. “…He failed us as a leader of a nation that’s supposed to respect all individuals.”

U of M-Dearborn Chancellor Daniel Little and activist Amer Zahr also spoke at the event.

In a final note, Rep. Dingell thanked the younger generation and expressed her pride.

“May these next generations not see some of the hatred that we have witnessed,” she said. “We will take on hate together and we will win.”