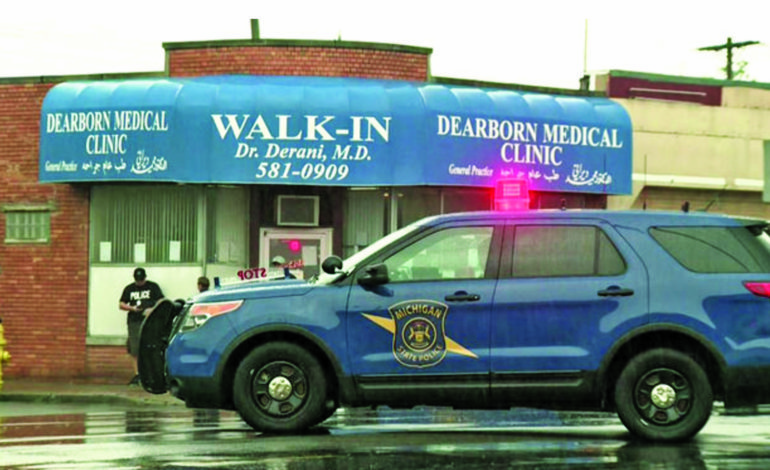 DEARBORN — About 8 a.m. on Thursday, Michigan State Police raided the Dearborn Medical Clinic, where a doctor is accused of over prescribing opiates.

Lt. Mike Shaw of the State Police described the clinic, located at Warren and Yinger Avenues, as a “pill mill” and said oxycodone is the drug most prescribed. It was attracting patients from all over at all hours of the day and night, becoming disruptive to the neighborhood.

“People lined up here at the three in the morning,” said Shaw. “And you’ve got nothing but people lined up around this neighborhood sitting in chairs. They actually ordered food in, to come to this place. When we actually hit the door there were people out here smoking marijuana right in the doorway, right as our officers hit the place.”

Dr. Mohammad Derani allegedly prescribed more than 500,000 opioid pills since January 2017. Investigators said roughly half of the pills ended up on the street. The pills were prescribed at the clinic and picked up elsewhere.

According to the sign on the building, Derani runs a general practice and family medicine clinic.

Veteran Brian Holt was inside the clinic Thursday morning when the police raided the place.

“I was just sitting there waiting to be seen and all of the sudden a bunch of cops came in the building and asked everybody to stay seated, and they took the doctor out in handcuffs, and started taking everybody out in zip ties who was inside the office,” said Holt.

Holt was questioned and released. He said he is a cancer patient and originally was prescribed painkillers by Veteran Affairs. That’s where he said he is headed now that his doctor has been arrested.

The doctor’s office manager also was arrested. At press time, they were scheduled to appear in court for arraignments Friday morning.

Some community members were quick to recognize the peculiar activities at the clinic, when they learned of the raid on a Facebook post by The AANews.

“I always pass that medical place is very uncomfortable a lot of people wait till they open around 5 or 6 a.m.,” commented Huss Maana.

“Every morning I pass by there and I always think it’s Black Friday,” said Moe Ayoub.