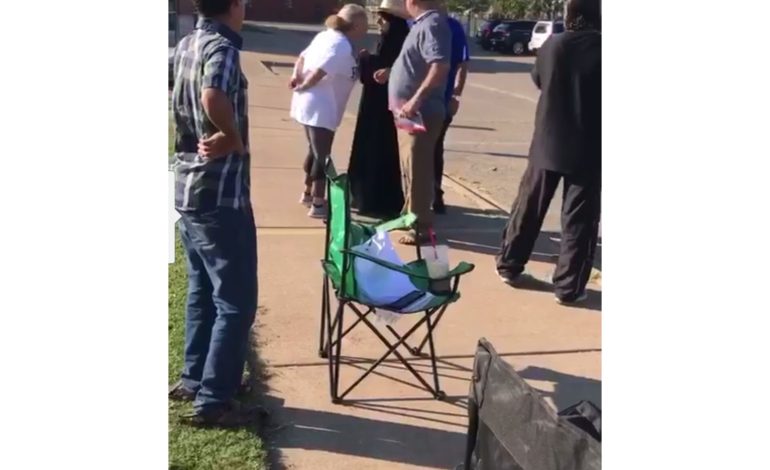 A fight between two campaign volunteers at Salina Middle School on Aug. 8

On any Election Day, be it primary or general, it’s the norm for residents to differ in opinions on particular candidates and their qualifications. That’s why voters have the right to choose their representatives at the ballot box after much debate and discussion.

However, that healthy democratic process should not turn into insolent public quarrels on Facebook and outside precincts, or divide the community the way it did on August 8.

The disturbing clashes, exchange of insults and baseless accusations among Arab Americans on social media have been evident even before Election Day, and have yet to dissolve during the current general election season.

We believe such despicable exchanges turned off residents’ inclination to vote, get involved or to even research newcomer candidates— as there was clearly a significant drop in votes cast. Unfortunately, the lowest vote getters happened to all be Arab Americans: Nada Al-Hanooti (2,712 votes), Fayrouz Bazzi (2,510 votes), Ramez Haidar (2,213 votes), Ziad Abdulmalik (1,412 votes) and Rifaat Hacham (1,139 votes). These candidates, like their other competitors, campaigned diligently and spent hard-earned contributions to promote and present their ideas, only for their efforts to fall on deaf ears and to be greeted with a disappointing turnout at the polls.

In one instance, the inappropriate and embarrassing discourse used outside a precinct by one campaigner against another was caught on video. Cuss words could be heard and the volunteers even came close to physically fighting each other outside the building housing the precinct. This incident undoubtedly played a role in creating negative images of the candidates they represented.

Such foolish acts hinder qualified Arab Americans from serving in public positions from which they could work to advance their community as productive citizens.

In times like this— more than ever— when our community is facing mounting local and national challenges, Arab Americans need to stop the bickering, unite and stay positively engaged. We must mute irrelevant arguments fueled by ignorance and make authentic Arab American voices heard.

Also, the slacking Arab American voter turnout is evident, yet community members still complain. There is nothing to complain about if you did not show up at the polls. Those who didn’t vote need to recognize that they lost another opportunity to move their issues forward and make their voices heard at the ballot box. That— not Facebook— is where it really counts.

If Councilwoman Susan Dabaja and Councilman Mike Sareini were not incumbents and their accomplishments did not speak for themselves, they wouldn’t have been the top vote getters this primary election and Arab Americans could have lost them as their representatives.

Gatherings such as the two peaceful vigils in Dearborn after the despicable White supremacist protests in Virginia on Saturday, August 12 are what make Dearborn special.

In fact, three Arab American student activists and their friends organized one of the peaceful demonstrations against hate at the University of Michigan-Dearborn campus. They gathered nearly 200 attendees.

Such acts should be a wake up call for the Arab American community. As a targeted community, we need to stand together against hate, like they did.

The only way to do that is to unite as a community against hate, not hate each other within it, because divided we fall.