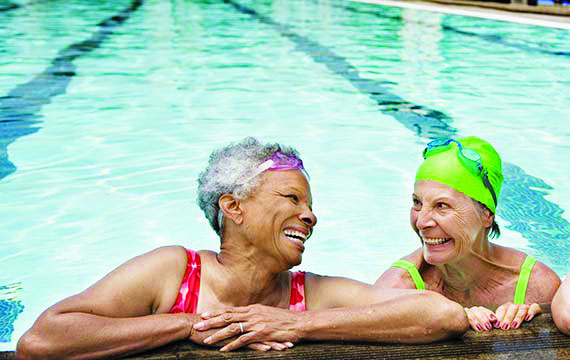 For people with type 2 diabetes, exercising in water is just as effective at improving blood sugar as other types of workouts, according to a review of existing research.

People who face obstacles in getting to a gym or exercising outdoors should consider hitting the pool to meet their exercise goals, the authors write in Acta Diabetologica.

Exercise helps lower blood sugar levels, which is a primary goal for diabetes management, but it also contributes to positive changes in body composition, blood pressure and cholesterol, and helps increase overall quality of life, the study authors note.

But only about 30 percent of people with type 2 diabetes adhere to a traditional exercise program that includes walking, running or resistance training.
“Our research group has conducted several exercise studies in people who have type 2 diabetes. We noticed that some people could not participate in our land-based (e.g., walking) studies due to barriers such as joint pain,” lead author Normand Boule told Reuters Health by email.

“We then planned to do a study on alternate forms of exercise, which could address some of these barriers,” said Boule, a physical education and recreation researcher at the University of Alberta in Edmonton, Canada. “Aquatic exercise seemed to be a logical alternative.”

But when Boule and his colleagues looked for prior studies on this topic, they were surprised to find that not many water-based exercise studies had been done with people with type 2 diabetes.

“These studies had few participants, making it difficult to fully understand how water-based exercise may benefit individuals with type 2 diabetes,” he said, so they decided to pool the results in a so-called meta-analysis for a bigger picture.

The researchers found that after eight weeks, water exercisers had reduced a marker of long-term blood sugar levels known as HbA1C by the same amount as people doing land-based exercise.

In addition, after eight to 12 weeks of water-based exercise, individuals may have improvements in blood pressure, cholesterol, and triglycerides, Boule said.