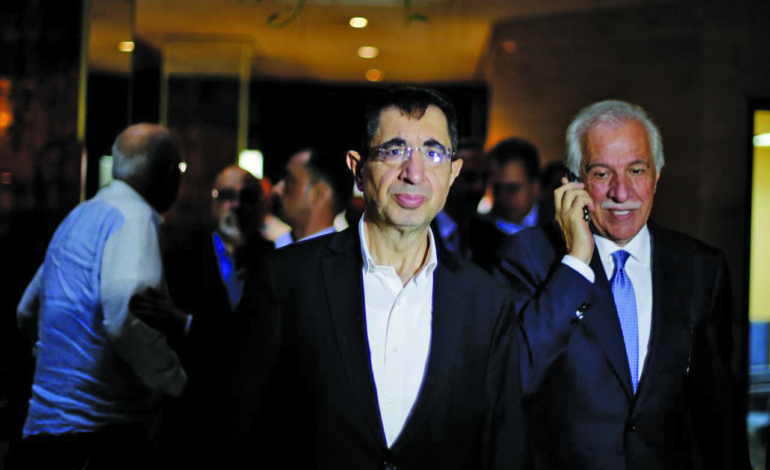 BEIRUT — Lebanese and Syrian ministers pledged to boost economic ties on Wednesday, part of a visit that has challenged the Lebanese state’s policy of neutrality toward Syria’s war.

Government ministers from Lebanon’s Hezbollah and the Amal party arrived in Syria for a trade fair, a trip that has ignited a political row in Lebanon.
The Lebanese government has refused to sanction the visit as official business, but Industry Minister Hussein Hajj Hassan has insisted they will be there as government representatives.

Calls to normalize relations with Damascus are testing Lebanon’s official policy of “dissociation”, agreed in 2012. The policy has aimed to keep the deeply divided state out of regional conflicts such as Syria, even as Iran-backed Hezbollah got heavily involved there.

The Damascus International Fair is to open this week for the first time since the Syrian conflict began six years ago.

In a village at the Lebanese-Syrian border, Hajj Hassan, a Hezbollah member, said the Lebanese ministers would meet with Syrian officials.
“The historic Syrian-Lebanese ties…will continue and we as Lebanese have every interest in them continuing,” he said.

“We are reactivating the trade and economic ties between the two countries,” he later told Reuters.

Hezbollah has sent thousands of its fighters to support Syrian President Bashar al-Assad’s government in the battle against Syrian rebel groups and militants.
Syria’s economy minister said the visit marked “a chance for joint action, for reinforcing cooperation, whether it’s in terms of investment or of trade.”

In a speech on Sunday, Hezbollah leader Sayyed Hassan Nasrallah pressed the Lebanese state to strengthen relations with Assad’s government. Nasrallah said Lebanon needed its larger neighbor for its security interests, as well as agricultural, gas and oil exports.

Lebanon’s Saudi-allied Prime Minister Saad al-Hariri has said any minister who goes to Syria does so in a personal capacity.

Samir Geagea, a leading Lebanese Christian politician and longstanding opponent of Hezbollah and Syrian influence in Lebanon, said the visit to Syria would “shake Lebanon’s political stability and put Lebanon in the Iranian camp”