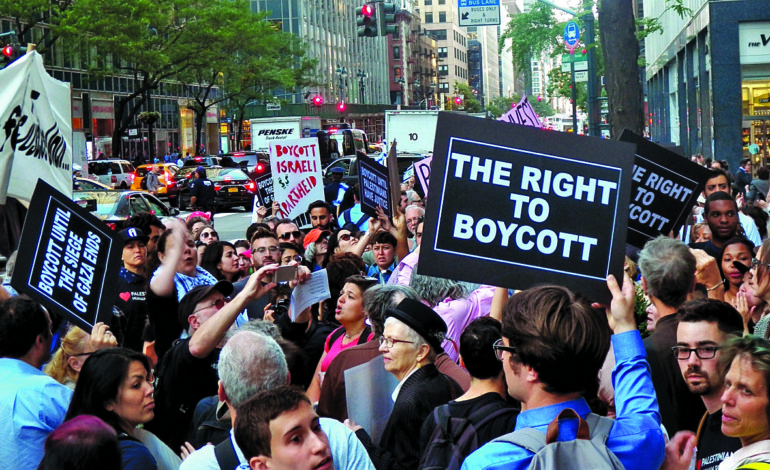 It is fascinating to watch some U.S. senators tripping over themselves as they attempt to defend their support for or opposition to proposed legislation that would make it a federal crime to support the international campaign to Boycott, Divest or Sanction (BDS) Israel for its continued occupation of Palestinian lands. What ties these officials up in knots are their efforts to square the circle of their “love of Israel”, their opposition to BDS, their support for a “two-state solution” and their commitment to free speech.

The bill in question, S.720, was introduced on March 23 by Sen. Ben Cardin (D-MD). S.720 opposes calls by the United Nations to boycott or “blacklist” companies that support Israeli activities in the territories occupied in the 1967 war. The bill further prohibits any U.S. person from supporting this U.N. call to boycott and establishes stiff fines and/or imprisonment for Americans who violate this prohibition.

There are a number of problems with the legislation. In the first place, supporters of S.720 grossly mischaracterize the intent of the U.N. approach as “anti-Israel.” In fact, as S.720 itself acknowledges, the U.N. Human Rights Council specifically targets only businesses that engage in activities in “territories occupied [by Israel] since 1967.” The U.N. target is not Israel, but Israeli actions that serve to consolidate its hold over the occupied territories.

Then there is the concern that by making illegal either the act of boycotting Israel or advocating for such a boycott, S.720 is criminalizing free speech and stifling legitimate peaceful protest.

Finally, the legislation continues to build on earlier Congressional legislation using slight-of-hand language in an attempt to erase the distinction in U.S. law between Israel and illegal Israeli settlements in occupied territories. While earlier legislation accomplished this by referring to “Israel and areas under Israel’s control”, S.720 notes that its boycott prohibition applies to “commercial relations…with citizens or residents of Israel, entities organized under the laws of Israel, or the Government of Israel.”

Since S.720 quickly gained 48 co-sponsors (35 Republicans and 13 Democrats) and has been supported by AIPAC and the Anti-Defamation League, one might have expected it to sail effortlessly through the Congress and be put on the president’s desk for his signature. That, however, has not been the case due to the efforts of many, including the American Civil Liberties Union (ACLU) and other progressive organizations led by MoveOn.

While the ACLU has based its opposition on the concern that the legislation violates the free speech rights of American citizens, MoveOn has taken a more expansive approach addressing both the concern with free speech and the fact that S.720 “erases the distinction in U.S. law between Israel and Israeli settlements.”
Given the capacity of both organizations to influence and organize liberal opinion, some Democratic senators have felt compelled to either justify their support for the bill or to distance themselves from it. In too many instances, these efforts have been awkward.

Two sponsors, Sen. Cardin and Sen. Ron Wyden (D-OR), have gone to great, but unconvincing, lengths to explain that S.720 does not violate an individual’s right to free speech. They argue that the bill is only directed at businesses or individuals who boycott Israel in response to international entities (like the U.N. or the European Union). But what they cannot explain is how punishing an American citizen who advocates for a U.N. boycott would not violate that citizen’s right to free speech.

Cardin, Wyden and other Democrats who support S.720 also go to great lengths to pledge their support for a “two-state solution.” But their pledges are hollow since they fail to acknowledge that the provision of S.720 that protects Israel’s settlement enterprise (“entities organized under the laws of Israel”) makes realization of a “two-state solution” impossible—given the location, size and continued expansion of these illegal settlements.

Even those who have come out against S.720 have had some difficulty explaining themselves. Sen. Kirsten Gillibrand (D-NY), for example, was one of the bill’s early endorsers. She courageously removed her name as a sponsor after learning of the free speech concerns of constitutional lawyers, saying “…I cannot support the bill in its current form if it can be interpreted as stifling or chilling free speech…So I took my name off the bill.”

Gillibrand, nevertheless, felt the need to balance her free speech concern with her support for Israel and her opposition to BDS adding, “I cannot state this more clearly: I vehemently oppose the BDS movement.”

It’s this last point that requires closer examination. While Israel and its supporters make a brave show of shrugging off the threat of BDS, they clearly feel threatened—otherwise why the hyper-activity to punish BDS? S.720 isn’t the first such effort in the Congress and nearly one-half of the 50 states have been pressed to pass their own versions of anti-BDS resolutions.

In order to build support for their effort, advocates for Israel have tried to portray BDS in the harshest of terms. They have made Israel the victim and while portraying advocates of BDS as “virulently anti-Semitic” aggressors. All of this has been done to obfuscate the reality that BDS is nothing more than a “strategic Palestinian-led form of nonviolent resistance to the occupation and denial of human rights.”

After 50 years of occupation, Palestinians have taken it upon themselves to challenge the world community to act. They have had enough of seeing their homes demolished and lands confiscated to make way for Jewish-only roads and settlement colonies in their midst. They want an end to the daily humiliation of being a captive people denied basic freedoms and justice. Instead of submitting to the occupier, they have decided to boycott and have urged those who support their human rights to join them in their call for an end to the occupation. Their action is as legitimate as was the call of African Americans in the Deep South in the 50s, and that of Nelson Mandela in South Africa in the 80s.

For the senate to oppose or to punish those who support this Palestinian call to individuals, businesses and governments to boycott, divest or sanction Israel for its oppressive occupation would put the senate in the position of saying that: They support Israeli practices; they don’t want Palestinians to use non-violent means to protest their treatment and/or they simply don’t believe that Palestinians are equal humans who deserve to have their rights protected.
And so the messages we should send to senators are clear. To those who support S.720: “Shame on you.” To those who oppose S.720: “Thank you for your opposition, but think again about whether the problem is BDS or the occupation that gave birth to it.” And to all senators: “Stop hiding behind your hollow profession of support for “two states.” If you are serious about peace, justice and equality, stop enabling the occupation that makes the realization of those goals impossible.”