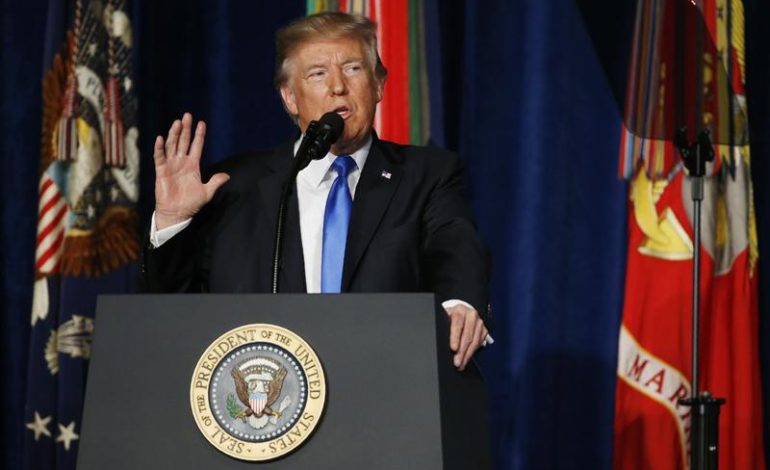 President Donald Trump announces his strategy for the war in Afghanistan during an address to the nation from Fort Myer, Virginia, August 21/Reuters

WASHINGTON — President Trump committed U.S. troops to an open-ended war in Afghanistan, a decision the Afghan government welcomed on Tuesday but which Taliban insurgents warned would make the country a “graveyard for the American empire”.

Trump offered few specifics in a speech on Monday but promised a stepped-up military campaign against the Taliban who have gained ground against U.S.-backed Afghan government forces. He also singled out Pakistan for harboring militants in safe havens on its soil, an accusation it denies.

While Trump said he would not discuss troop levels or details of the new strategy, U.S. officials said on Monday he had signed off on Defense Secretary James Mattis’ plans to send about 4,000 more troops to Afghanistan.

Trump said “my original instinct was to pull out” all American troops but he was convinced by his military advisers after a lengthy review of the United States’ longest war.

“The consequences of a rapid exit are both predictable and unacceptable,” he said. “A hasty withdrawal would create a vacuum that terrorists, including ISIS and al Qaeda, would instantly fill.”

While Trump said “our troops will fight to win”, he also stressed that ultimately Afghanistan’s police and army must to most of the fighting to defeat the Taliban and allied Islamist militants.

“The stronger the Afghan security forces become, the less we will have to do. … We want them to succeed.”

Later on Monday, U.S. Rep. Debbie Dingell (D-Dearborn) stressed the importance of clarity and reopening the debate on the war in Afghanistan.

“President Trump’s address did not outline clear metrics for achieving victory or measuring success,” Dingell said in a press release. “The war in Afghanistan was authorized under President George Bush before many members of Congress even contemplated running for the offices they hold today. When Congress returns in September we must take up this important debate, including a serious discussion about how to reach bipartisan consensus on a new authorization for the use of military force.”