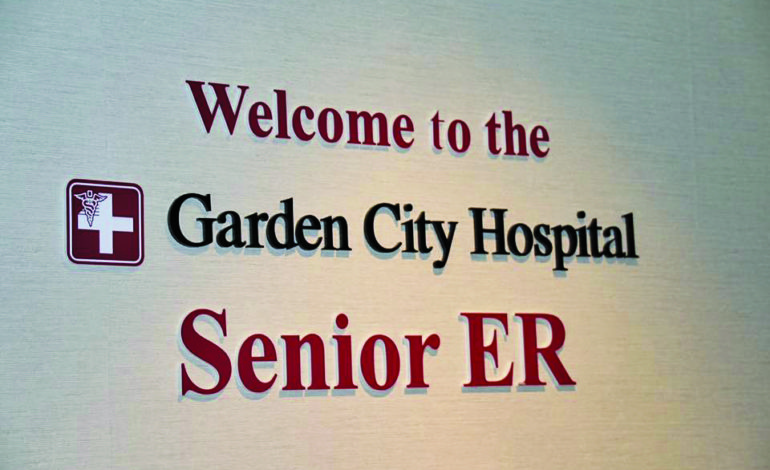 GARDEN CITY — As the times change, so does the health needs of its residents — and the best quality care happen when facilities form partnerships with communities.

At its grand opening on Wednesday, Aug. 23, Garden City Hospital executives and medical staff celebrated with a ribbon cutting and showed off the new lobby and patient beds to local and state government officials and community members.

Angela Cheers, the hospital’s ER medical director, spoke to a packed lobby about the program, about major investments and a shift in the organization’s overall mission, born out of a deep relationship with locals over decades.

Reflecting the country’s population trend, the hospital found that people 65 and older make up the majority of residents in the area, and who seek the most care.

Cheers said the senior ER brings staff trained on how you approach elderly people differently, private accommodations, walls instead of curtains, larger documents for reading, easy to read clocks and more blankets. Other advantages over the original ER department include easily available reading glasses, hearing assistive devices and telephones, as well as seamless transition of care.

“The whole purpose is to try to meet the needs of a population that’s complex already,” Cheers said. “Because they’re struggling with a lot of physiological changes, are on a lot of medication and have a lot of challenges.”

Besides a more accommodating environment, the hospital staff are working with community organizations to provide additional services outside the hospital. Cheers pointed to a study by the American College of Emergency Physicians that senior ER patients have 400 percent more social service needs.

But the devil is in the details, and for Cheers the most exciting addition is an easily accessible “File of Life” that contains comprehensive medical history that might have been lost throughout the years, along with vital care and emergency contact information.

Leslie Fleming, business development and marketing director, told The AANews that seniors in the area are the only part of the population expected to grow in the next 20 years, according to data from the Southeast Michigan Council of Governments.
The vast majority of inpatients, patients who stay at the hospital while undergoing treatment, are 65 and older, she added.

While the focus is on maintaining superior health care— as demonstrated by seven safety and quality awards, six of them received in 2017 — Fleming said they have not disregarded drastically cutting wait times.

She said Garden City’s ER sees upwards of 50,000 visits a year. A couple of years ago, a person spent from six to eight hours in the ER. Today, patients are seen and sent home in about two to three hours.
Garden City Hospital CEO Saju George told The AANews the enhancements were the result of Garden City Hospital joining Prime Healthcare, a leading and the fastest growing for-profit healthcare system in the nation, three years ago.

Since then, the focus has primarily been on improving efficiency, outcome and reducing the cost, he said.

“Our goal is to make a difference for the community,” George said. “We’re a community hospital, we want to tailor our care to the needs of the community.”

He added that part of that goal is an investment of $15 million to modernize the facility’s infrastructure and upgrade technology, and to expand clinical programs and form agreements with neighboring health care systems to bring more medical experts to Garden City Hospital.

George said the hospital worked on a grassroots level and considered “extensive” feedback from focus groups to tailor the projects and restructure their goals — from the board to the all clinical elements — to highlight diversity, quality and patient outcome throughout the entire process.
Additional renovations, expected to cost around $20 million, are planned to begin before the year’s end.

As an official and patient, Westland Mayor Bill Wild thanked Garden City Hospital for the high quality treatment it provides and the multi-million dollar investment made in his community.

He told The AANews he is “proud” that the hospital he was born at in 1968 is “still here and flourishing.”
“It’s now fit for more personal needs,” he said “…I would encourage our residents to give it a try…it’s really a nice upgrade.”