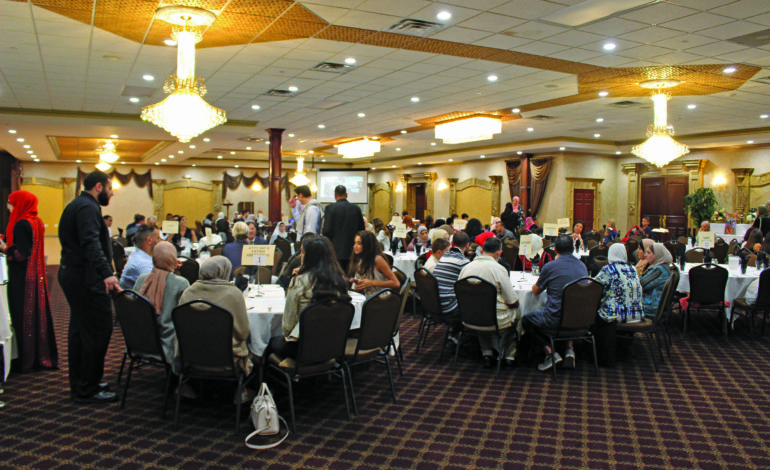 WARREN — “Should I even bring this little girl into the world? How will my child be raised? In a refugee camp?”

These are the distressed thoughts— told by an Arab American teen— of Hanana Asaad, a young mother ready to give birth at a Jordanian refugee camp.

She reportedly walked three miles, malnourished and weak, to the clinic and went into labor three weeks early.

Her family had fled daily bombings in her Syrian village five months prior and hitched a ride for 30 miles to the Jordanian border.

After a heartening talk with a physician, a baby girl named Amal — Arabic for hope — was born.

That real-life narrative was the inspiration for HOPE (Helping Oppressed People Everywhere), a non-profit dedicated to raising awareness of the importance of helping orphans, refugees and widows world-wide.

More than a hundred Muslim American community members were moved by the story told at HOPE’s debut fundraiser dinner at Wayne Tree Manor on Wednesday, Aug. 23.

Omar Abdrabboh, HOPE’s founder, said the organization was a natural evolution from years of charity work during trips to refugee camps.

He had no plan and was just trying to help as many people as possible. The trenches of the refugee camps were therapeutic and gave him perspective, he said.

Now he wants to establish a platform to send youth and other volunteers on humanitarian missions worldwide.

“This is entirely about humanity,” he said. “Breaking through paying it forward. Doing the right thing and showing the world how similar we are.”

Many attendees were donors to past mission trips over the last five years, but HOPE became official last month.

Sharing HOPE’s mission, Abdrabboh said they are aiming to feed a million people, sponsor and mentor orphans, provide access to medical treatment and build wells in Africa, among other initiatives.

To get there, the group will rely on raising funds through private donations, dinners, GoFundMe campaigns and spreading awareness, among other efforts.

HOPE has raised more than $4,300 through its GoFundMe page, as of press time.

But perhaps the most important aspect of the initiative is to educate local youth about the hardships of the disadvantaged and provide a “hands-on experience as to what it takes to make the place a better world.”

The volunteers can expect to feed refugees and widows, visit hospitals and give Eid and Christmas gifts, among other projects.

Abdrabboh added that this Ramadan, the group fed about 2,500 people in need and organized dinners for widows and orphans in Palestinian and Syrian refugee camps in Jordan. They fed about 5,000 people in 2015. They have also sponsored refugees’ trips to Hajj, hired medical nurses and assisted about 100 medically challenged widows.

Attendees were also given a glimpse of the refugees’ debilitating living conditions, where tens to hundreds of thousands of mostly unemployed refugees live in cramped makeshift shelters.

Rehab Amer, founder of American Muslim Empowerment and Resources (AMER), told The AANews she attended the fundraiser to support an organization with the same goal as hers: To ensure that poor and orphaned children have an opportunity to become important members of society.

The non-profit seeks to place orphans in homes with a similar cultural upbringing and surrounding, per a bill she advocated the state legislature to pass in 2011.

Amer said there are displaced orphaned refugees in the United Sates, although the foster care system has no statistics on how many.

The need for Muslim foster parents is high, but few Muslim foster facilities exist and not many Muslim families have a license to adopt, she said.

Misconceptions in the Muslim community about the Islamic ruling of a non-relative living in the same home hinder placing children in Muslim-priority families, she added.

However, she said Muslim parents are increasingly opening up to the idea and encouraged those interested to apply for a foster or adoption license.

Amer said parents can choose the age and other characteristics of a child they wish to adopt and can easily be trained through orientation and safety courses to meet the state’s requirements.

To learn more and donate to HOPE, visit www.gofundme.com/HelpOppressedPeopleEverywhere-Orphans-Widows-andRefugees.

To learn about AMER and adoption, visit www.amerfostercare.org.