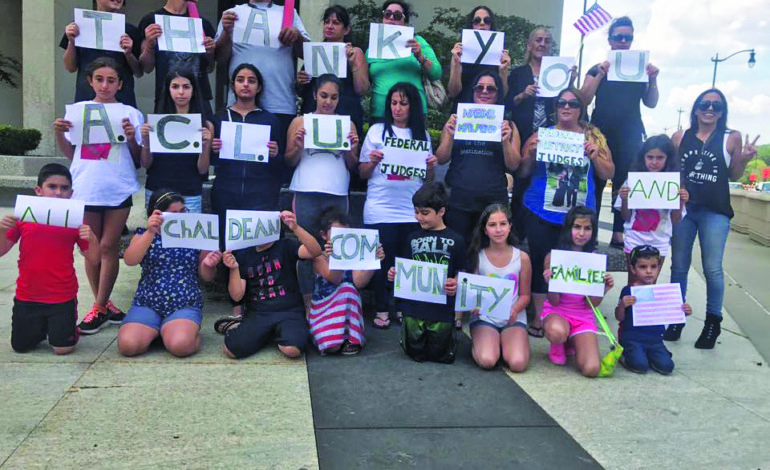 DETROIT— In mid-July, Steve Spreitzer, president of the Michigan Roundtable for Diversity and Inclusion, began forming a coalition to counteract hate speech directed at Muslims which came from Kalkaska Village President Jeff Sieting.

Sieting called for death to all Muslims in a Facebook post. He has came out and said he’s protected by the First Amendment’s free speech provisions.

The coalition is made up of Muslim allies, including the Anti-Defamation League, Jewish Community Relations Council/AJC, Interfaith Leadership Council of Metropolitan Detroit, Women’s Interfaith Solutions for Dialogue and Outreach in Metro Detroit, the Michigan State Conference NAACP and the ACLU of Michigan.

Spreitzer’s team contacted Governor Snyder’s office to get a statement from the governor on Sieting’s statements. At the time, Snyder was in China, and once he was back the coalition planned to give him 10 days to respond. In that time, the hate incidents in Charlottesville, VA took place. Snyder issued a press release on August 14.

“Hate speech and violence are not welcome in Michigan,” Snyder said. “It’s not representative of who Michiganders truly are or of the future we want to build for our children.”

However, he never addressed or referenced Kalkaska and Sieting.

“That’s not enough,” Spreitzer said. “This is a matter of life and death.”

The coalition sent a letter to Snyder which demanded he move from neutrality to allyship. The letter stated:

“We have read the statement that you released on August 15 and appreciate your affirmation that ‘[H]ate speech and violence are not welcome in Michigan.’ However, the current environment is one in which more is demanded. We call upon you specifically to condemn Kalkaska Village President Sieting’s recent call for deaths to all Muslims and other minority groups. Failure to do so is equivalent to silence. Your silence implies something is wrong with Muslims and other minority groups, leading to possible internalization of this hate and fanning the flames of hatred already ablaze in our state. As Elie Wiesel once countenanced, ‘We must always take sides. Neutrality helps the oppressor, never the victim. Silence encourages the tormentor, never the tormented.’”

Spreitzer said one big concern surrounding the Village of Kalkaska is that White supremacist militia are congregating there and see the place as a ground zero for hate.

Spreitzer said he believes a person in the highest elected position in the state reflects the morality of the state.

One reason he said he and his team put the letter out was to draw attention and raise the voices of people experiencing hate and discrimination.

“Also, to send a message to those who feel the hate and are realizing that they could be harmed, whether its emotionally or physically, at any point,” Spreitzer said. “And their loved ones could be harmed… What a horrible way to live.”

Spreitzer said that he wanted to send a message to colleagues to let them know they’re loved; and to help bystanders, people who stay neutral and quiet on positions such as Kalkaska, and aid in moving them from toward allyship.

Additionally, the message is also for the people who are hateful, cowards or “bullies on the playground”, as Spreitzer stated, to let them know that there are consequences to their words and actions.

“I think this letter puts the governor on notice,” said Kary Moss, the executive director of the ACLU of Michigan and cosigner of the coalition letter. “There is an expectation that he speak up strongly and forcefully when anything like this happens. So, moving forward, we hope that he will rise to the occasion. And if he does not, we will continue to put public pressure on him to be the kind of role model this state can be proud of.”

Moss said it is a huge concern for any elected official in the state to make any statement that is threatening to a particular group.

“Charlottesville was a turning point of sorts,” she said. “For many, the role that the police played in it [was] in terms of very poor organizing of that demonstration and allowing, for example, the protesters and counter-protesters to march down the same street.”

Additionally, she said the president’s reaction to Charlottesville, including his willingness and readiness to blame those who were there to speak up against discrimination and hate speech, was uncalled-for.

“He [Trump] went too far,” Moss said. “I see many, many people now speaking up and thinking about all of this differently.”

Snyder still hasn’t either denounced or condemned what Sieting said.

“I’m very troubled if the governor and his staff think that the statements he’s made thus far are sufficient,” Moss said. “This is a unique moment Michigan’s history and the responsibility on our leaders for moral leadership is unprecedented.”

Sieting’s Facebook page is public and has multiple posts with negative sentiments about Muslims; also, there have been posts where he openly called former President Obama a Muslim; both showing an active hate for Muslims and Obama by association.

Heidi Budaj, the Michigan regional director of the Anti-Defamation League, said Sieting’s statements are a disturbing, egregious and verbal attack on the Muslim community, and it has been a lightning rod for their coalition to engage the governor.

“But this [Sieting’s hate speech] is only a symptom of the problem,” Budaj said. “The root problem is that it has somehow become acceptable in our society to express anti-Muslim sentiments, anti-Semitism and racism. That’s what we’re really fighting against. And that is what we’re really asking our governor to stand up to.”

Budaj said that the diversity in the United States is what makes it great.

“Hatred and bigotry are affronts to our core democratic values,” she said, adding that what happened in Charlottesville was frightening, particularly to the Jewish community and every minority community in the country.

An important component to the coalition letter is that those who signed it are all in allyship with Muslims. Spreitzer purposely did this because he felt that Muslims needed to know they’re not alone and that the broader community stands with them.

“Civil rights didn’t really get legs in the 60s until the broader White community marched with African Americans,” said Raman Singh, president of the Interfaith Leadership Council of Metropolitan Detroit and cosigner of the coalition letter. Singh also said that when allies stand up for minority and marginalized communities, there is great movement and change.

“These are times of discernment, times of trial,” Singh said. “Of determining who we are and who we want to be. Our actions really have an effect. It is a difficult time for many people, but it is a time of reckoning. We can look ourselves in the eye and decide who we want to be.”

Spreitzer said that now that the letter is public, there is no set strategic plan other than to sit with the coalition, the NAACP and especially the Muslim community to discuss and regroup after celebrations of pilgrimage (hajj) and the Muslim holiday of Eid al Adha have passed

The letter closed with these words:

“This is a moment that calls upon all of us to exercise moral leadership. More is required from you, the governor of this state. We ask that you condemn those specific remarks and not stand silent in the face of violence and threats to our communities. As Senator Orrin Hatch said, ‘We should call evil by its name. My brother didn’t give his life fighting Hitler for Nazi ideas to go unchallenged here at home.’ More is required.”

The full letter to the governor can be found at www.miroundtable.org