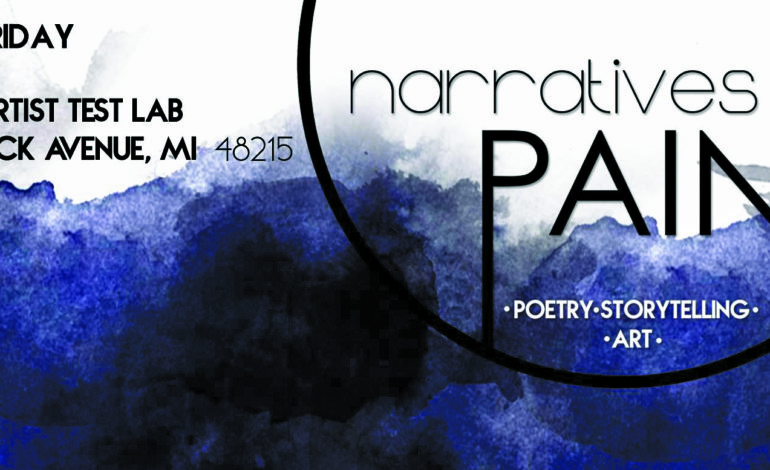 DETROIT— In March 2015, the first Narratives of Pain storytelling event took place in Dearborn at the Muslim Mental Health Conference. Co-founders Zain Shamoon and Hammad Ali packed a room of more than 100 people to witness stories of struggle on stage.

They have since expanded their team and last year made Narratives of Pain a nonprofit.

The organizers have stated that Narratives of Pain is the belief of healing through the witnessing and sharing of stories and art.

“Zain [Shamoon] invited me to be a featured storyteller,” Mahmud said. “He said, ‘Hey, I know you’re an artist, I was wondering if you wanted to share some art, if you wanted to tell as story about trauma.”

Mahmud said he typically didn’t share personal stories with strangers, but he said the way Shamoon described the space to him made Mahmud feel comfortable.

Mahmud wrote a song about his father, who was in prison.

“I felt that if I put my trauma into art, if I told this story through writing a song and performing it, it could be therapeutic,” Mahmud said. “So that’s what I did.”

The event structure consists of featured storytellers who have previously contacted the organization to be scheduled to share on stage in the first half of the event. After the featured stories, the stage is opened up for what the organizers call the “community storytellers”, people in the audience who feel inspired and brave enough to share, like an open mic.

This can be the most powerful and profound part of the evening, Mahmud said.

Additionally, Mahmud said attendees may be retriggered by past traumas, and a week after an event there is always a processing meet-up. The processing is open to anyone who attended the event a week prior, to help people get connected to mental health resources or for those attendees to share a space with others to share and connect.

“Each one has been so different,” Mahmud said about the Narratives events. “It is a different space every time. The space has a lot do with it. Seating, lighting, the people who show up. It’s a community driven event. Each event sort of reflects the community.”

Mahmud also said that throughout the event there are ways in which attendees are engaged through community-building exercises. Audience members are asked to respond verbally from their seats if they feel comfortable to prompts given by the host.

Aamina Ali, the chief financial officer for Narratives, said she originally became involved because she was the event pianist.

“I played piano between each of the acts,” Ali said. “After a few shows I decided I wanted to get more involved.”

Ali said Narratives of Pain provides a platform for anyone to voice what they are experiencing personally, so they may share their struggles.

“Its not just about the storytelling,” she said. “Its equally important for the people there listening. It creates a sense of solidarity—solidarity through the human experience.”

Ali said the word “pain” might throw some people off due to negative connotations of the word, but she feels that the event is more positive because it is providing a space for community members to share in a judgment-free space.

“There is a lot of trauma,” said Marianne Caddy, the event coordinator for Narratives. “It is a lot to take in, the evening after or the next morning, that I’ve moved forward emotionally and [am] able to connect with people. It’s a very fulfilling experience.”

Caddy said there will be a launch party for the Narratives of Pain website on September 15. This event will be different than the regular shows as it will be more informal and social.

She also said many people from the Muslim community were initially attending the events. However, as the reach of Narratives expanded, different groups and people of many backgrounds have attending the shows.

One attendee, David Hill, said that prior to attending the first Narratives of Pain event he expected it to be a poetry slam. He wasn’t prepared for what the night entailed.

“It felt like a very long night,” Hill said of the first event in 2015. “There were a lot of emotions that I had not dealt with myself that were brought to bear.”

Hill said he felt he was experiencing and enduring the trauma with the person who was sharing on stage at the time. He said that after the events he attended he had to decompress.

Hill plans to attend the next storytelling event, and he said he hopes that one day he will get on stage and share.

“It is encouraging to see other people go up,” Hill said. “And to hear them share their story and their narratives, and we always thank them for their courage.”

The next storytelling event will be free and will take place on September 29 at 7 p.m. at the Detroit Artists’ Test Lab, 14600 Mack Ave.

Information on Narratives of Pain can be found at www.facebook.com/narrativesofpain