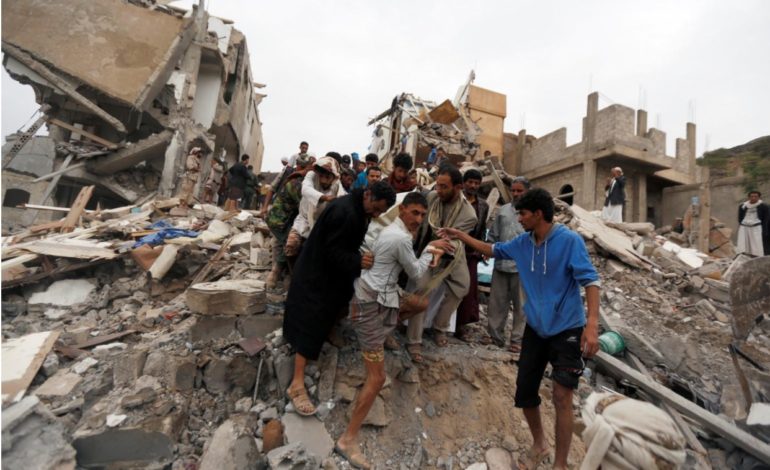 Peozple carry the body of a woman they recovered from under the rubble of a house destroyed by a Saudi-led air strike in Sanaa, Yemen August 25, 2017. - Reuters

SANAA – An air raid by Saudi led Coalition struck a building in Yemen’s capital on Friday, killing at least 12 people, six of them children, when an adjacent apartment block collapsed, residents said.

RThe International Committee of the Red Cross (ICRC) denounced the loss of life as outrageous and put the death toll in the early morning attack on the Faj Attan area of Sanaa at 14, with 16 wounded.

Seven people from one family were among the dead including four children aged 10 and under, the ICRC said, adding that a total of three buildings in the residential area were hit.

“Such loss of civilian life is outrageous and runs counter to the basic tenets of the law of armed conflict,” the deputy head of ICRC’s delegation in Yemen, Carlos Morazzani, said after visiting the site.

“From what we saw on the ground, there was no apparent military target.”

People at the scene told Reuters the warplanes were from a Saudi-led Arab coalition, which has been fighting the Iran-aligned Houthi movement in a war that has lasted more than two years and killed at least 10,000 people.

“The air force of the countries of the American-Saudi aggression carried out a hideous massacre against the citizens in Faj Attan,” an official Houthi movement website said.

The United States and Britain provide arms and logistical assistance to the alliance for its campaign. The issue has caused controversy in Britain over the toll on civilians.