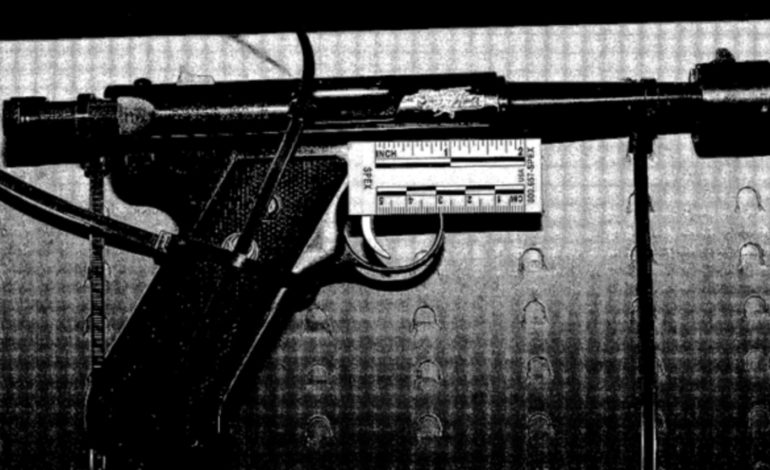 Ruger Mk. II .22 caliber handgun found in a storage unit in Ann Arbor, Michigan during the execution of a search warrant on Wednesday, August 23.

YPSILANTI ― An Ypsilanti man is facing federal charges after weapons without serial numbers were found in a storage unit in Ann Arbor. He was detained before he was due to fly to the Middle East with his family.

Yousef Mohammad Ramadan, 28, is charged with possession of a firearm with an wiped out serial number, which had moved in interstate commerce. The complaint was filed by an agent with the FBI’s counterterrorism team, but Ramadan has not been charged with a terror-related crime.

According to the complaint filed in criminal court, Ramadan was departing for Jordan on Aug. 15 with his wife and children when he was stopped and interviewed by Customs and Border protection officers. He told authorities his family was relocating to Bethlehem.

Ramadan allegedly told officers he owned two rifles and a Glock handgun, which were put in a storage unit, but officers said he later recanted and said he gave the firearms to a friend.

Agents later identified a storage unit in Ann Arbor believed to have been used by Ramadan, and a search warrant was executed on Aug. 23. The complaint says the unit was in Ramadan’s wife’s name. False information was allegedly filed in the rental agreement to hide Ramadan’s affiliation with the storage unit, FBI officials said.

Agents found two rifles and a Kimber Covert Pro II handgun in the storage unit, which were registered in Ramadan’s name, as well as an upper receiver and other components of an AR-15 rifle.

Two pistols, a Jennings J-22 silver plated handgun and a Ruger Mk. II .22 caliber handgun, were found with the serial numbers scratched off, according to the complaint. Neither handgun was manufactured in Michigan, according to FBI officials.

Ramadan was arraigned over the weekend and was ordered held until a detention hearing Tuesday. He and his family lived in the Willow Ridge Apartments in Ypsilanti up until three weeks ago and spent much of the last decade in California.