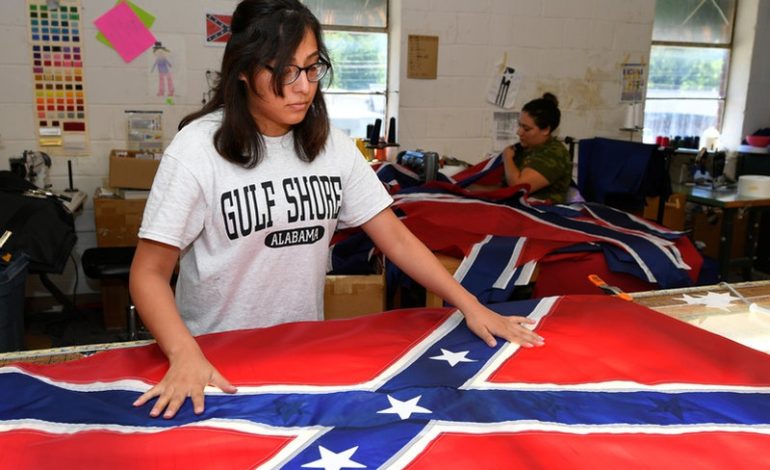 Demand for Confederate flags at Chris Ackerman’s Civil War memorabilia shop in Pennsylvania has surged since violence at a white nationalist rally in Virginia this month reignited the United States’ debate over race and the legacy of slavery.

The trend has been similar for other sellers of the Confederate battle flag, retailers report. But now that most major U.S. flag makers no longer produce it, given the controversy over the banner, much of the new demand is filled by imports from China and other countries.

“We need to get more flags,” Ackerman recalled saying following the first order after the Aug. 12 rally in Charlottesville, Virginia. His Gettysburg Regimental Quartermaster store, near a historic Civil War battlefield, and website sells $400 handmade flags to re-enactors and $40 ones shipped from China.

Ackerman said demand had jumped fourfold to as many as 40 sales a week, an increase he likened to the surge in gun sales that occur whenever new gun control measures are weighed or feared.

Large retailers – including Wal-Mart, Amazon, eBay and Sears – stopped selling the flag in 2015 after an image emerged of one being clutched by Dylann Roof. The white supremacist killed nine members of a Bible study group at a historic, predominantly black church in Charleston, South Carolina.

Since then, a national debate has intensified over symbols of the pro-slavery Confederacy. Civil rights activists say they promote racism, while advocates contend they recognize Civil War valor and are a vital reminder of their Southern heritage.

The flashpoint for the Aug. 12 violence in Charlottesville was the protest organized by white nationalists against plans to remove a statue of Confederate General Robert E. Lee. A 32-year-old local woman was killed when a man crashed a car into a crowd of anti-racism counter-protesters.

Amid the renewed discussion of the Civil War’s legacy, many cities in the South have stepped up their removal of Confederate monuments and other contentious symbols of the failed effort by the Confederacy’s 11 states to secede from the Union.

Some businesses also got involved: The Six Flags over Texas amusement park removed a Confederate flag from its entrance. A group of Mississippi history professors called for the Confederate emblem to be removed from their state’s flag. And local news media reported that a flea market in Pennsylvania asked vendors not to sell Confederate flags.

But at Alabama Flag and Banner, one of the few remaining U.S. makers of Confederate battle flags, sales topped 150 in a single day last week, equivalent to about a quarter of average annual sales.

“I have been quite surprised,” said Belinda Melson-Kennedy, who owns the Huntsville-area company.

Flag orders also quadrupled at Dixie Outfitters in Odum, Georgia, whose website says tongue in cheek that it has been “preserving Southern heritage since 1861” – the year the Civil War began. Owner Dewey Barber said he sells as many as 15,000 Confederate flags a year, which he obtains from distributors who often source them from overseas.

Few major U.S. flag manufacturers still produce the Confederate battle flag, said Reggie VandenBosch, secretary of the Flag Manufacturers Association of America. He did not know exactly how many are made or sold each year.

The flags can still be found at independent shops selling higher-end versions, websites with cheap imported flags, flea markets and from smaller makers such as the Southern Pride Flag Co, whose website says it is located in “occupied Georgia.”

The flag carried into battle by Confederate forces has long been a fixture in popular culture, including prominently on the roof of an orange Dodge Charger muscle car in the popular 1980s TV show “Dukes of Hazzard.”

It has often been adopted as a sign of independence or defiance, often without historical context, said Karen Cox, professor of history at the University of North Carolina-Charlotte. But it also serves as rallying symbol for the far right and was carried by marchers in Charlottesville who included Ku Klux Klan members and neo-Nazis.

Alabama Flag and Banner’s Melson-Kennedy, whose distant relatives fought for the Confederacy, said she disliked seeing the flag used by white supremacists. But she said it remained an important reminder of Southern history and culture.

While it remains unclear whether the push to remove Confederate monuments will result in more flags coming down, acceptance of their display in public spaces appears to be declining, said Brandy Faulkner, a Virginia Tech expert on race and politics.

“It’s not going away,” Barber said. “They can take down monuments, they can ban this and that, but it doesn’t take away from the fact that we’re celebrating our heritage.”