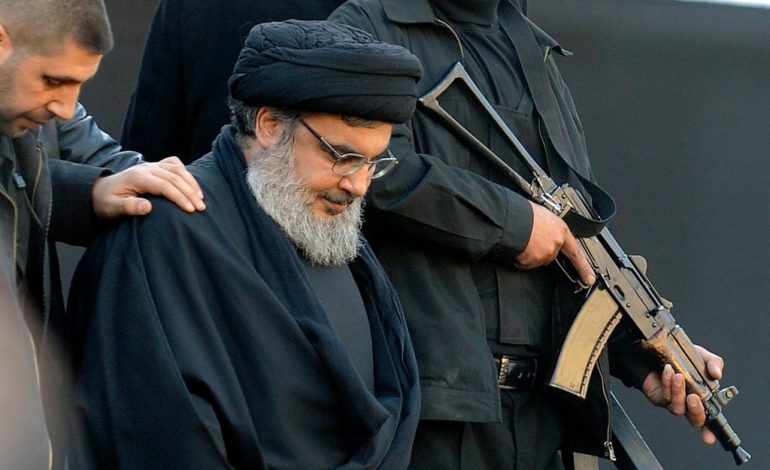 BEIRUT —A convoy of ISIS fighters and their families left the Lebanon-Syria border region on Monday under Syrian military escort, surrendering their enclave and traveling to eastern Syria after a week-long battle.

A line of ambulances and buses were shown on Syrian state television driving slowly through the arid countryside, the border’s pale hills behind them as they departed.

The transfer ends any insurgent presence on the border, an important goal for Lebanon and Hezbollah, and marks the first time ISIS has publicly agreed to a forced evacuation from territory it held in Syria.

ISIS agreed to a ceasefire deal that took effect on Sunday, Aug. 27, with the Lebanese army on one front and Hezbollah with the Syrian army on the other. The extreme militants had lost much of their mountainous enclave straddling the border since the two offensives began on opposite sides of the frontier.

Lebanon’s Hezbollah has been a close ally of Syrian President Bashar al-Assad through Syria’s six-year war.

The leader of Hezbollah, Sayyed Hassan Nasrallah, said on Monday, Aug. 28, in a televised speech, that the group had accepted ISIS’ evacuation partly in order to find out the fate of nine Lebanese soldiers in ISIS captivity since 2014. Nasrallah declared the end of the offensive and the surrender and withdrawal of ISIS fighters as a victory.

“Today, August 28, 2017, is the Second Liberation Day of Lebanon that will be recorded someday in the history of Lebanon and of the region, whether the Lebanese government recognizes it or not,” Nasrallah said, calling for celebrations on Thursday, Aug. 31, in the eastern Lebanese city of Baalbek.

“We hold only a Lebanese passport,” Nasrallah said. “We do not have two nationalities; we are the sons of this land. We have the right to live in this land with dignity. If our country is threatened by an invader or an occupier or terrorist, we will fight it here, we will win here, we will be martyred here and we will be buried here.”

The convoy being transferred into Syria included 308 militants with their small arms and 331 civilians, Nasrallah said in a televised speech.

ISIS will hand over one Hezbollah captive and the bodies of some Hezbollah forces and one Iranian fighter killed in battles across Syria, he said.

At the last stage of the deal, the two sides would exchange the bodies for the convoy of militants at a transit point in Syria, Nasrallah said.

Eleven Hezbollah fighters and seven Syrian soldiers had been killed in their offensive in the western Qalamoun region on Syria’s side of the border, he said.

The border battle has ended in “fully liberating Lebanese land and securing the border with Syria,” he said.

Both Hezbollah and Lebanese officials have billed the evacuation as surrender by ISIS.

The U.S.-led coalition said it has bombed ISIS vehicles on their way to join a convoy of other ISIS members traveling from the Syria-Lebanon border towards Iraq under the deal brokered by Hezbollah, adding that it will not allow the terrorists to escape.

“We are not party to any agreements that were made by the Lebanese Hezbollah and ISIS or the Syrian regime,” Dillon told AP.

Earlier, the coalition bombed a bridge and the road in the convoy’s path to prevent it from reaching the area held by ISIS in eastern Syria.

“The convoy of buses and ambulances has not been struck, but there have been individual vehicles and individuals clearly identified as ISIS, and we did strike those,” Dillon said. “If we can strike ISIS where we’re able to do so without harming civilians, we will do that.”

Dillon said airstrikes directly on the ISIS convoy remained a possibility, but as of late Wednesday had not been carried out because coalition officials were trying to verify whether civilians were intermingled in the group.

By Wednesday, it was unclear how far the convoy had traveled, but Dillon said it was his understanding the coalition had stopped it before it reached militant-held territory in Deir al-Zour Province, and would not allow it to continue farther east.

A second attempt to reach Deir al-Zour was made on Thursday, but by the evening a U.S. coalition spokesperson said that the convoy had instead moved deeper into an area controlled by the Syrian army.

“Irreconcilable ISIS terrorists should be killed on the battlefield, not bused across Syria to the Iraqi border without Iraq’s consent,” tweeted Brett McGurk, U.S. special envoy for the Global Coalition to Defeat ISIS, who also spoke for the coalition’s efforts under the Obama administration.

“Our coalition will help ensure that these terrorists can never enter Iraq or escape from what remains of their dwindling ‘caliphate,'” McGurk added.

Several critics have responded to the official’s tweets, noting that U.S.-backed Syrian fighters gave ISIS terrorists a safe passage out of the city of Manbij last year.

“The agreement to let ISIS militants escape likely saved hundreds of civilians held by the fanatical fighters, even though it allowed some ISIS militants to escape,” USA Today cited a senior U.S. defense official as saying last August.

The Trump administration, however, said it changed its tactics in the fight against the terrorist group.

“[Trump] directed a tactical shift from shoving ISIS out of safe locations in an attrition fight to surrounding the enemy in their strongholds so we can annihilate ISIS,” Defense Secretary James Mattis said in May.

He explained that by “taking the time up front to surround these locations, instead of simply shoving them from one to another”, coalition forces are able to “carry out the annihilation campaign so we don’t simply transplant this problem from one location to another.”

Lebanese officials defended the safe-passage deal because it rid the country’s borders of ISIS terrorists and assuaged public concern over the fate of the nine missing servicemen. But others in the region were critical. Iraqi Prime Minister Haider al-Abadi faulted Syria for moving the ISIS fighters to its eastern frontier, along the border with Iraq.

“We fight the terrorists in Iraq,” he said in a speech on Tuesday. “We do not send them to Syria — we kill them in Iraq.” Abadi called on the Syrian government to investigate the decision to relocate the ISIS fighters.

“There should be full cooperation on the elimination of terrorism, not the evacuation of them from one place to the other,” he said.

However, on Thursday, Iraqi Vice President Nouri al-Maliki defended the evacuation deal between Hezbollah and ISIS militants. Maliki denounced what he described as “the systematic campaign of criticisms against Hezbollah”, adding that transferring ISIS militants was “part of the strategy against terrorism.” Maliki said that “every battle has its circumstances and its tools for victory.”

In a speech on Thursday evening, Nasrallah defended the deal, saying he had met with President Assad in Damascus, seeking his help in guaranteeing the ceasefire and the agreed return of the remains of nine Lebanese Armed Forces soldiers captured in 2014. The deal was implicitly endorsed by the Lebanese government.

Addressing his followers via a televised speech, Nasrallah described the gains against the terrorists as the second liberation after the withdrawal of Israeli military forces from southern Lebanon and Western Bekaa region in 2000.