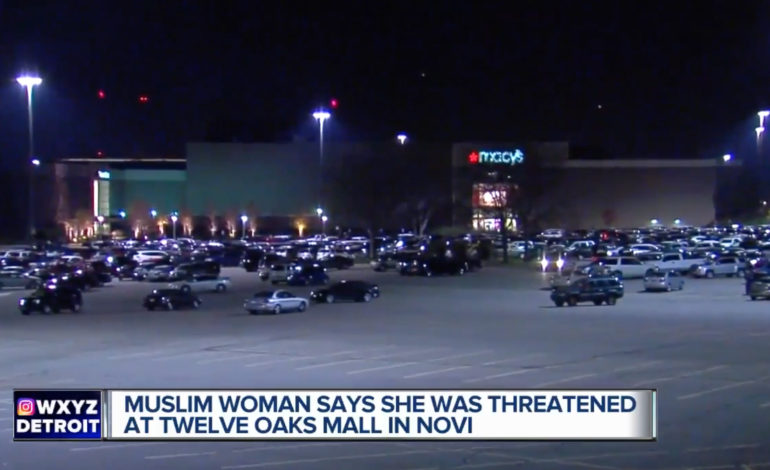 NOVI — On August 8, a Muslim family was accosted in the parking lot of Twelve Oaks Mall by a White man in his 30s who hurled epithets and derogatory slurs at them. The mother, out of fear for her two children, called the Novi Police Department.

After driving past the family, the assailant parked his car and approached the family with similar vulgarity and with such intensity that the veins in his head were visibly throbbing, according to Fatina Abdrabboh, an attorney representing the family. Fatina Abdrabboh, an attorney for the alleged victim

Abdrabboh said that once Novi Police arrived on the scene, the man noticeably calmed down and admitted his vulgarity to the officers, who happened to have been Caucasian as well. He was taken to a hospital in an ambulance and treated for depression.

“I would like to see the cops do their job,” said Abdrabboh, executive director of the American Muslim Advocacy League.

She said the man targeted the Muslim family specifically because of how they looked. Abdrabboh said she doesn’t think people who suffer from mental health issues should be absolved from their actions.

She also said the officers who responded to crime scene “missed the boat” by telling the mother of two that there was nothing they could do for her.

According to Abdrabboh, the police don’t make the determination to charge someone or not; they report the incident. She said the officers’ eye witness accounts of the scene have the most important bearing in court in cases like this. She added that an officer’s report of the incident was, “either sloppy, deliberately biased, or maybe subconsciously biased.”

An edited police report, obtained by The AANews, states, “I was advised of a White male subject that was yelling at the RP (reporting party) in the parking lot of 12 Oaks Mall. I arrived on scene and spoke with Haifa Mussa. Mussa stated that while walking toward the mall, a White male subject began yelling at her family. The male was yelling that the Arabic family should go back to their country. (He) was observed exiting his vehicle

and continued to yell at the family. I located (him) inside Twelve Oaks Mall. Cleared scene, no further assistance required.”

Abdrabboh said this incident now goes down as a regular call to Twelve Oaks Mall, and that is a problem because it impacts hate crime statistics. She said hate crime victims are afraid to report and this lack of action precipitates that behavior.

Abdrabboh said her client was scared the man saw her license plate and would possibly follow them home. She described Mussa as crying, shivering and freaking out.

The Novi Police Department told The AANews that the man was not charged with a crime because the incident did not satisfy the elements of a crime. An officer, who did not respond to the scene, said the behavior was reprehensible but not a crime, adding that the matter is closed as of now, unless new information arises.

Dan Jones, general manager of Twelve Oaks Mall, told The AANews the assailant is not welcome back at the mall. He said the mall does not tolerate intimidating or threatening behavior of any kind and that shoppers’ safety is their number one priority.

Jones said the situation was extraordinarily rare for the area.

“One of the beauties of Novi is how diverse it is,” he said.

The incident leaves the Arab American community in a precarious situation as law enforcement is unable to act because of the Supreme Court’s historical tumultuous interpretation of the First Amendment.
In 1942, the “fighting words” doctrine was introduced by the Supreme Court.

“[Walter] Chaplinsky, a Jehovah’s witness, called a city marshal a ‘God-Damned racketeer’ and ‘a damned fascist’ in a public place,” according to oyez.org. “He was arrested and convicted under a state law for violating a breach of the peace.”
The court created the “fighting words” doctrine in this case and it makes the distinction between fighting words and free speech.

Hate speech vs free speech, the debate is on!

Fighting words are “words which would likely make the person to whom they are addressed commit an act of violence,” according to the Legal Information Institute at Cornell Law School. “Fighting words are a category of speech that is unprotected by the First Amendment. Chaplinsky v. New Hampshire, 315 U.S. 568 (1942).”

This interpretation was challenged by the court seven years later in Terminiello v. Chicago (1949).

In that case, Arthur Terminiello delivered a speech that inspired the crowd to riot. Terminiello was arrested for violating a “breach of peace” ordinance. “The trial court had interpreted the ordinance to prohibit any speech that “stirs the public to anger” and “invites disputes,” according to the book “American Constitutional Law” by Louis Fisher and Katy J. Harriger.

The court wrote, “it may indeed best serve its high purpose when it induces a condition of unrest, creates dissatisfaction with conditions as they are or even stirs people to anger. Speech is often provocative and challenging. It may strike at prejudices and preconceptions and have profound un-settling effects as it presses for acceptance of an idea.”

The doctrine got murkier in 1971 in a case called Gooding v. Wilson. In a 5-2 decision, the court protected a man’s right to say, “White son of a bitch, I’ll kill you” to a police officer.

This interpretation came from the Justices unanimously. The court decided “the First Amendment prevents government from punishing speech and expressive conduct because it disapproves of the ideas expressed,” according to Oyez.org.