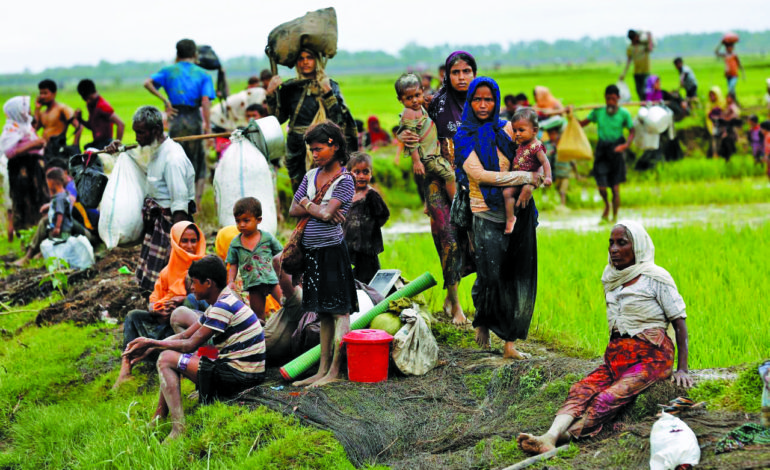 COX’S BAZAR, Bangladesh — When his family of six crossed the monsoon-soaked Mayu mountains last week, Mohammed Ishmail tied his 4-year-old daughter to his back with a longyi, or Myanmar sarong. His wife carried their two-year-old the same way.

The trek through the dense bush of the mountains took two days, but the journey from his home in Khin Tha Ma village – which he says was on fire the last time he saw it took 10. He said it felt like a month.

The number of refugees who have arrived in Bangladesh from Myanmar’s Rakhine state since militant attacks there on Aug. 25 stands at nearly 150,000.

They have come by land, river and sea. Many have died along the way. Others have found themselves detained by human traffickers, demanding payment for their rescue.

Their destination is the Cox’s Bazar region of impoverished Bangladesh, where hundreds of thousands of Rohingya already live in makeshift camps, reliant on overstretched aid agencies.

‘No one to ask directions’

Once through the mountains, Ishmail’s family came across villages in the northern part of the Maungdaw district – the epicenter of violence in the state since October that had been abandoned. By his count, only about one in 20 houses had survived fires that have swept the area.

“Some people are still hiding in the forest on the Maungdaw side, but in some villages there’s no one,” he said. “There was no one to ask directions.”

But then there was. As they reached a canal and were trying to find a way to cross it, he said, two young Myanmar soldiers spotted them and aimed their guns, he said.

“I put my hands up and shouted, ‘We’re going to Bangladesh,'” he said. There was a tense silence before the soldiers lowered their weapons and showed them the best way to cross the canal, he added.

In one village, to escape the rain, Mohammed Ishmail entered a house still standing to find the bodies of five boys, who appeared to be teenagers, their necks hacked and heads nearly severed.

The death toll in the conflict is more than 400 and rising.

Myanmar says most of those killed have been insurgents, but accounts from new arrivals in Bangladesh suggest reprisals by Myanmar security forces and Buddhists against Rohingya civilians the government says are in cahoots with “extremist Bengali terrorists.”

Myanmar rejects accusations that its security forces are targeting civilians saying they are fighting “terrorists.”

Dozens of bodies, including those of women and children, have washed up on the Bangladesh side of a border river, many with bullet or knife wounds, according to Bangladesh border guards. Fishermen report seeing bodies floating in the river.

Thousands on the move

In Maungdaw, thousands of people are on the move. A Rohingya aid worker, who was in touch with Reuters during his flight, recorded video of the journey on his mobile phone.

“It’s like something I’ve never seen before, not even in any film,” the refugee said after his arrival in Cox’s Bazar.

The footage appears to show hundreds of people lining up to cross a river in Laung Don village. Some swim across, as two small ferries run back and forth.

At one river crossing, the aid worker said, fighters from the Arakan Rohingya Solidarity Organization (ARSA) prevented ferries from crossing for half a day, telling civilians to return to their homes.

The campaign group Fortify Rights has documented how ARSA has prevented men and boys from leaving the area.

The refugee, who asked not to be identified so he could freely discuss his journey, said the fighters backed down when villagers pleaded with them.

In southern Maungdaw, the military’s campaign has driven tens of thousands of people to the coast. Bangladeshi boatmen, in their hundreds, are going to pick them up.

Mostly by night, the wooden crescent-shaped boats that normally ply the fishing grounds of the Bay of Bengal make the journey across the 3.6 mile mouth of the Naf river that separates Myanmar and Bangladesh. The five-meter boats are loaded with as many as 50 people and their belongings.

Soon after the conflict blew up, boats began landing at Shah Porir Dwip, a remote island off the southernmost tip of Bangladesh. But after three boats capsized in two days last week, killing 24 women and children, authorities launched a crackdown on boatmen and brokers they call human traffickers.

More than 50 people have been sentenced to short jail terms as a warning to others not to take advantage of the crisis.

Turkey will provide 10,000 tons of aid to help Rohingya Muslims who have fled violence in Myanmar, President Tayyip Erdogan said on Wednesday.

“I spoke with (Myanmar leader Aung San Suu Kyi) yesterday. They opened the doors after our call,” Erdogan told a meeting of his ruling AK Party in Ankara.

He said Turkish aid agency TIKA was already delivering 1,000 tonnes of aid to camps for the displaced.