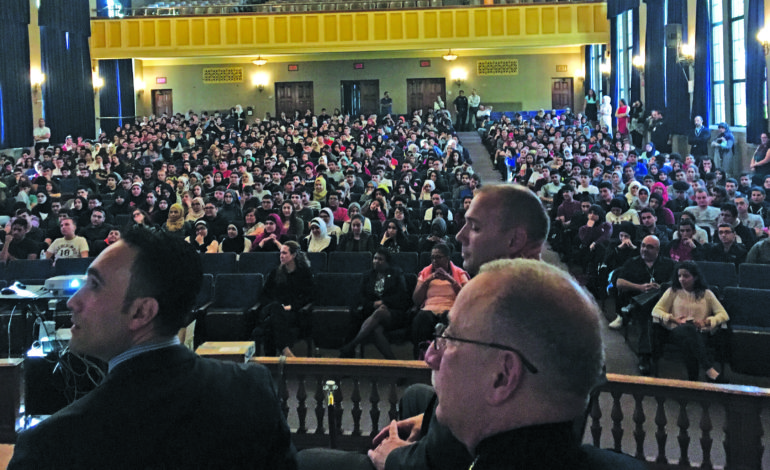 DEARBORN — School is back in session and the Dearborn School Board of Education continues to tackle the overcrowding issue at Fordson and Dearborn High schools.

In an August 29 study session, the board eliminated proposals of forming a new high school or a ninth grade academy, calling them unfeasible. It found boundary line changes and an expansion at Dearborn High School and Edsel Ford High School as their best fiscal and pragmatic options to fixing the problem and expected some parents, who don’t want to send their children to a specific high school, to be unhappy with the plan.

President Mary Lane told The AANews that the board looks at the district as a single unit.

“We do look at individual schools,” she said. “But we want to make sure that there’s equity across the district and that includes building size as well as facilities. Size does have an impact on school culture.”

Therefore, the board is seeking to alter some boundary lines to make sure all school resources are being used, she said.

“It bothers me that we have capacity at Edsel Ford that was added during the big bond of 2002 and it’s not all being used,” she said. “I don’t feel comfortable with having capacity unused, so I think redistricting boundaries is a given for me.”

She told The AANews this unquestionably changes some community members’ plans and will upset them.

“It’s painful,” she said. “But in the long run, it’s frequently better for the students and their families and it’s definitely best for the district… If you’re one of the people upset with the change, just give it a month and see how it goes and you’ll be satisfied.”

Lane said she wants people to share their thoughts and feelings about the plan at the September 11 board meeting, but not to immediately disapprove of it.

The AANews previously reported in May that approximately 2,700 students attended Fordson High and just around 2,100 attended Dearborn High. According to Superintendent Glenn Maleyko, the projected numbers for the 2017-2018 school year is 2,894 and 2,068 students, respectively.

By contrast, Edsel Ford High School stood below the limit at about 1,300 students last school year. Now it holds 1,512 students with room for more.

At the meeting, Student Services Director Abe Mashhour discussed the direction the boundary line redistricting plan would take and its efficiency in decreasing enrollment.

Mashhour said if all Smith and Bryant middle school students attended Dearborn High, the number of students enrolled would decrease to about 1,840 students. He added that if the one section of Woodworth students sent to Edsel Ford remains untouched and all Salina and Stout students attend Edsel Ford, the high school would increase enrollment to about 1,640.

As for Fordson, its enrollment would drop to 2,600 if it took all the students from Lowrey and Unis and students north of Michigan Ave. at Woodworth.

He called it the “cleanest split.”

However, Mashhour said he plans to bring to the table in-depth projections, including architectural drawings, costs and numbers as requested by the board, to the next meeting. The board has yet to decide on the plan.

Any boundary line changes would launch in the 2018-19 school year, but would not affect those already enrolled in the high school. Therefore, it would take four years for its full effectiveness to become apparent.

Edsel Ford Principal Scott Casebolt said the school has no empty classrooms, so it would need additions.

“We can’t do it without expansions,” he told the board.

The additions at Edsel and Dearborn would need one to one and a half years to complete.

She said all three high schools should encourage their students to take classes there because the center is educationally advantageous.

The board members said they won’t vote at the September 11 meeting because they want the community to be involved in the discussion.

“We need to make sure that we present this in a way that they feel included even if we know that the decision is ours to finalize,” Trustee Mary Petlichkoff said.

The board meeting starts at 7 p.m. at the Administration Building on 18700 Audette St.