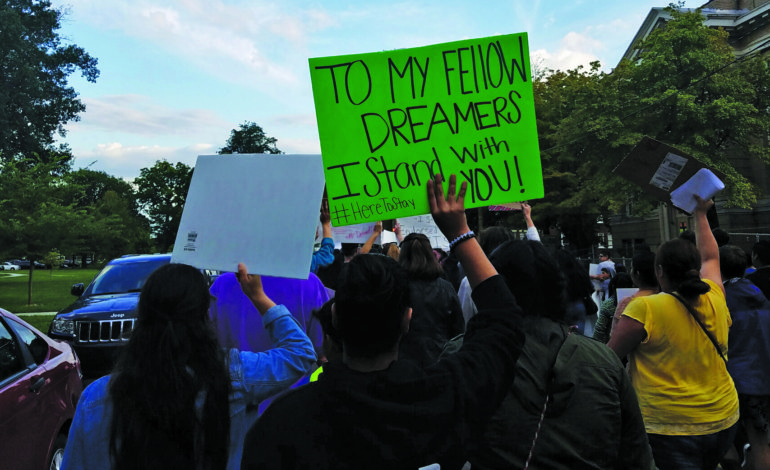 Marchers took to the streets as they made their way around Clark Park. A sign by a protester reads: "To my fellow dreamers I stand with you." - Photo by The AANews

DETROIT — “I’m 16 years old and I am undocumented,” said a young Detroit woman at the Defend DACA rally at Clark Park on Tuesday.

Jose Franco, a founding member of One Michigan, organized the event as a response to President Trump’s executive order to end the Deferred Action for Childhood Arrivals (DACA) program.

DACA was enacted by the Obama administration in 2012 as a way for undocumented minors to receive work permits and deportation deferment. There are 800,000 people in the program and every two years they are up for renewal, which costs $495.

Some benefits to being a DACA recipient are having access to a Social Security card and acquiring a driver’s license in some states.

Trump’s executive order doesn’t take away DACA from recipients prior to September 5. However, there can’t be any new applications to the program. Hundreds crowded around Clark Park to listen to people directly affected by the executive order speak, as well as community members who are in allyship with DACA recipients or “Dreamers” and undocumented persons.

Some refer to DACA recipients as “Dreamers” after the DREAM Act, which if passed would help immigrant minors have a pathway to citizenship.

Chang also said immigrant youth have benefited from DACA, and that they have worked hard in order to meet the requirements necessary to be recipients of the program.

“You’ve done all of the things our country has asked you to do,” she said.

Chang said more than 6,000 Michigan residents benefit from the DACA program and through it have become more integrated into U.S. society.

Chang also said DACA recipients contribute to the economy and that the program should not be taken away from them or potential applicants.

“Unless we act now to preserve the DACA program, our economy would stand to lose $460 billion from the national GDP,” said U.S. Rep. Brenda Lawrence (D-Southfield) in a statement she released Tuesday. “In Michigan, DACA has allowed more than 6,400 young people to come forward, pass background checks and live and work legally in the country. Ending DACA in Michigan would cost Michigan more than $418 million in annual GDP losses.” Emgage USA CEO Wa’el Alzayat said Tuesday that Trump’s actions are unconscionable and that Trump is willing to further his xenophobic policies on the backs of children and young adults.

“This hatred of those who are different must stop,” Alzayat said. “First it was Muslims. Now it is immigrants. Who will it be next?”

At Clark Park, a member of the Iraqi Chaldean community spoke about the mass detainment of Iraqi Chaldeans that took place in June.

“I am proud to stand here and say that through our efforts not one person, not one, has been deported to Iraq,” said the Iraqi Chaldean representative. “I see a lot of pain and suffering in a lot of you today. And I just want you to know that this fight isn’t over. It just started. So stand up, get organized and fight back.”

“President Trump’s heartless action will only serve to create fear and anxiety for the DACA recipients and their loved ones, and will force them back to living in the shadows, rendering them unable to contribute to our nation’s economy,” Awad said.

“This administration’s decision to terminate the program was not taken lightly,” Duke said. “The Department of Justice has carefully evaluated the program and determined it conflicts with our existing immigration laws and usurps Congressional authority.”

Duke further stated that the administration believes it chose the least disruptive option by phasing out the DACA program instead of abruptly shutting it down.

State Rep. Abdallah Hammoud (D-Dearborn) disagreed with the president’s decision and stated that he is “profoundly disappointed” in the president. Hammoud said the decision to end the DACA program is part a series of decisions coming from the Trump administration which, “incite fear and confusion in the immigrant community and bias and distrust among many Americans.”

Leaders from The Evangelical Immigration Table issued statements calling upon Congress to act against the executive order.

Mexican immigrant and DACA recipient Alonso Guillén went to Houston last week to help victims of Hurricane Harvey. Unfortunately, his rescue boat hit a bridge and both he and his friend Tomas Carreon drowned.

“It’s simply un-American,” said NAACP interim President and CEO Derrick Johnson. “At a time when Houston is still under water, where a Dreamer died trying to save flood victims, and California is on fire, the president decides to focus on unrelated policies and threaten the livelihoods of innocent children. Now, Congress has to deal with two national tragedies: The aftermath of Hurricane Harvey and this one created by the president.”

Agustin V. Arbulu, the director of the Michigan Department of Civil Rights, issued a statement that detailed concerns about the potential rise in hate crimes as a response to end of the DACA program.

“I am concerned that it will trigger an increase in hate crimes and bias incidents directed at these individuals – acts that are superficially aimed at their ‘legal status’ but are, in reality, based on race, ethnicity and national origin,” Arbulu said. “Discrimination of this sort is in direct violation of Michigan’s Elliott-Larsen Civil Rights Act and the Department of Civil Rights is ready to investigate any act that violates the legally-protected civil rights of Michigan residents.”

Rula Aoun, the director of the Arab-American Civil Rights League (ACRL), highlighted the fact that the decision by Trump on the DACA program came less than two weeks after the pardon of Joe Arpaio. Aoun said the former Arizona sheriff “drew intense criticism for his aggressive pursuit of unauthorized immigrants, which earned him a criminal contempt conviction.”

“To target these young people is wrong – because they have done nothing wrong,” Obama said. “It is self-defeating.”

Obama also said the executive order wasn’t required legally, and that it was a political decision and a moral question.

“Ultimately, this is about basic decency,” Obama said. “This is about whether we are a people who kick hopeful young strivers out of America or whether we treat them the way we’d want our own kids to be treated. It’s about who we are as a people – and who we want to be.”

On Thursday, Trump tweeted a statement to DACA recipients:

“For all of those (DACA) that are concerned about your status during the 6 month period, you have nothing to worry about—No action!”

As those who rallied on Tuesday took to the streets at Clark Park to march, traffic stopped on one side while participants held signs and chanted nonstop. Traffic stopped on the Fisher Freeway as marchers rounded the park.

Chants included, “Hey, hey, ho, ho! Donald Trump has got to go!” and “Down, down on deportation! Up, up on education!”

The march ended on the stage and hill at Clark Park, where attendees were able to connect with members of One Michigan to learn more about more actions being taken by the group, and also how to sponsor a Dreamer’s renewal fee.

“There are others like me, my age, who couldn’t get DACA, who are crying right now because they know they won’t be able to go to college—but that’s not true,” the 16-year-old young woman told the crowd. “If we keep fighting and we stick together, something will happen. We are the change of this future.”