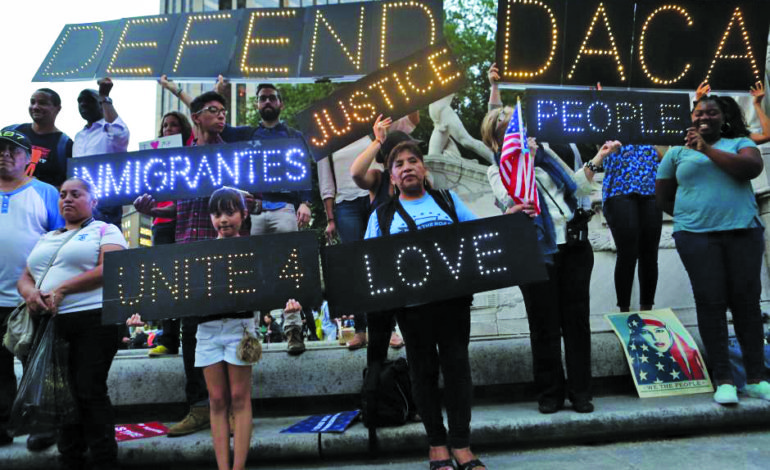 The American Dream: Work hard, play by the rules, provide a better life for your family. The dream that has attracted immigrants to our shores for more than a century must be reformed and modernized to accommodate our modern-day realities. Republicans and Democrats both agree. However, the recent actions of our president to end the Deferred Action for Childhood Arrivals (DACA) program is cruel and misguided. The plaque at the base of the Statue of Liberty reads: “Give me your tired, your poor, your huddled masses yearning to breathe free, the wretched refuse of your teeming shore. Send these, the homeless, tempest-tost to me, I lift my lamp beside the golden door!” These beautiful words are overshadowed by the vitriolic state of our political discourse in today’s debate about immigration.

Millions of people have come to the United States seeking prosperity. Immigrants open businesses, make scientific discoveries, pay taxes and make our country stronger. This is what the United States of America represents.

DACA has allowed roughly 800,000 people who came to the U.S. as children the ability to work and study legally. In Michigan, more than 6,400 people are enrolled in the program, which mandates stringent criminal background checks and requires good legal standing. But it’s not simply that these people aren’t criminals — 95 percent of “Dreamers”, as these young people are known, are employed or in school, making a better future for themselves the same way those who came before them did.

We must remember that this program is open only to people who arrived in the U.S. before their 16th birthday, meaning that they did not choose to come to this country. It is cruel to kick the Dreamers out of a country which, for many, is the only one they have ever known.

Beyond the cruelty, it simply doesn’t make economic sense to end this program. In Michigan alone, the end of DACA could cost nearly $420 million annually in lost GDP. Nationwide, if all the Dreamers were removed from the labor force, the absence of those 685,000 workers would cause a $460 billion loss in GDP over the coming decade.

We still have a chance to make things right. As state representative of the Ninth District, I am doing what I can to be a strong voice for those in need of comfort in this time of uncertainty. Congress must pass legislation in the next six months to ensure that these students, workers, homeowners and entrepreneurs can remain in America and continue strengthening our communities and our economy.

While that may seem like a tall order for a House and Senate stalled by partisan gridlock, the American people across the United States are demanding an answer. For our economy, for our communities and for our basic humanity, keeping DACA is the right thing to do. The time for Congress to act is now — we can’t let the American Dream become a nightmare.