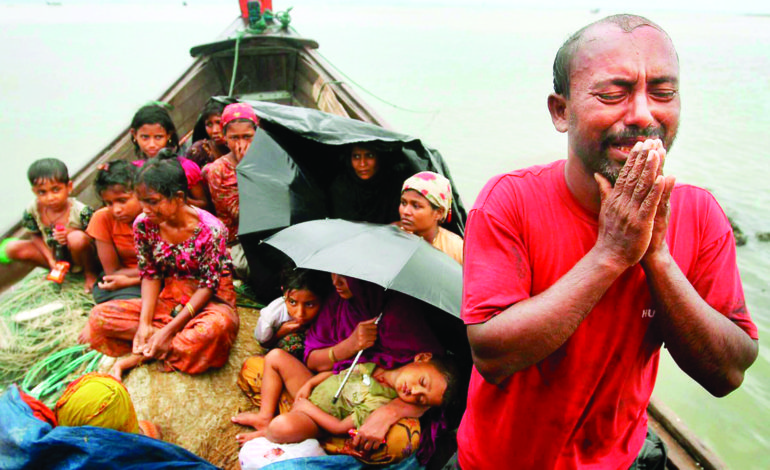 If nothing is done, the horrific tragedy in Myanmar will turn into an even bigger one as it would spread to other countries.

The genocide of the Rohingya Muslims became a major global focus this week and yet no official outcry against their massacre or for immediate aid was made.

Making headlines should raise awareness about the crisis— immediately outraging humanity as a call for action— not silencing and immobilizing it.

According to an op-ed written by Deputy United Nations Director Akshaya Kumar called “Burma’s Rohingya Need the World’s Attention”, U.N. Secretary General Antonio Guterres resorted to asking the Security Council to speak out against the persecution of Muslims in Burma, now known as Myanmar.

She said Guterres even wrote in a public letter that the “international community has a responsibility to undertake concerted efforts to prevent a further escalation of the crisis.” And, in reply to a U.N. reporter’s question, he warned of the risk of ethnic cleansing in Myanmar.

Yet, the “Security Council has said nothing publicly about a situation that the U.N. special advisor for the prevention of genocide has warned ‘can be the precursor to all the egregious crimes — and I mean genocide,'” Kumar wrote.

This is shameful and unacceptable from a council that’s supposedly founded on international security. But it’s as if when it came to slaughtering Muslims, that basis ended and the victims aren’t entitled to security.

More than 150,000 refugees have escaped to Bangladesh since August 25. Burmese militias are executing children, raping women and setting men on fire. -U.N. report

According to the U.N., the Rohingyas are the most persecuted minority group in the world as they struggle to claim citizenship in Myanmar and other countries.

It reports that more than 150,000 refugees have escaped to Bangladesh since August 25. Burmese militias are executing children, raping women and setting men on fire. Images and videos show bodies washed up on the shores of the river between Myanmar and Bangladesh.

These monstrous acts have been going on since the 1980s.

Rohingya and Kaman Muslims in the Rakhine State of Myanmar were killed by Buddhist monks and racial Rakhine villagers with the state security forces’ assistance in 2012. At the time, the Human Rights Watch revealed the killings equated to ethnic cleansing.

This time, the military took charge of these horrific murders.

Sadly, Myanmar’s own government leader, Aung San Suu Kyi, showed no sympathy for the Rohingya Muslims. This is ironic because she was tormented by former military systems, jailed and the won the Nobel Peace Prize for her democratic efforts.

And yet, she uttered no words in sympathy or outrage against the inhumane crimes, rather claiming that the military is searching for Rohingya militants who have assaulted police and army posts.

She also did not care for any requests from the U.N., nearby governments, aid organizations and even her fellow Nobel laureates, including Malala Yousafzai, to end the violence and send humanitarian assistance to the victims. The fact that she even needs someone to tell her, just like the Security Council, that these atrocities must be stopped is deplorable.

Muslim majority countries have spoken out against the crimes and pressuring the Myanmar government in an effort to stop the genocide, but Western countries have been reluctant— which isn’t surprising, as many Western political leaders would rather speak out against Muslims than those who commit crimes against them. It’s an undeniable fact.

Therefore, the U.N. seems to be Rohingya Muslims’ only hope.

“The ball is now in the Security Council’s court,” Kumar said. “Council members should call for a public briefing by the secretary general on the situation in Burma, demand authorities allow humanitarian aid to flow freely to the population at risk and warn that a failure to cooperate with the U.N.-backed fact-finding mission will result in international sanctions. Most importantly, the Security Council needs to call on the Burmese government to immediately end atrocities against the Rohingya people. Even powerful allies should not be shielding Burma from the world’s scrutiny.”

We agree with Kumar. If nothing is done, the horrific tragedy in Myanmar will turn into an even bigger one as it would spread to other countries.

On Tuesday, a Burmese human rights group based in London said the violence against Muslims in the Buddhist-majority country increased in the past five years and led to the formation of “Muslim-free zones” throughout the country.

“The transition to democracy has allowed popular prejudices to influence how the new government rules and has amplified a dangerous narrative that casts Muslims as an alien presence in Buddhist-majority Burma,” their report said.

This report does not only describe Myanmar, but also represents the Western world as well. Muslims have also become an “alien presence” in Western countries due to media that reports false representations and political leaders who spew hateful and racist rhetoric.

This unified vision of hate will only lead to more tragedies all over the world if officials keep quiet.